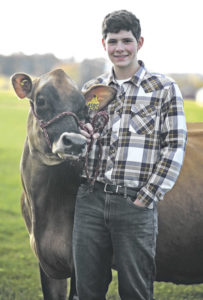 Jack Zina of Hadley, MA, was one of the 31 youth from 15 states selected to attend the seventh Jersey Youth Academy that occurs July 11 – 16 in Columbus, Ohio. The announcement was made by Jonathan Merriam, president of the American Jersey Cattle Association (AJCA), on Jan. 22.

“The 31 young people from 15 states selected for this class exemplify the many talented, interested Jersey youth across the United States that our organization wants to encourage to pursue careers in the Jersey dairy business,” Merriam said. “Continuing the impact of the national Jersey youth programs offered by the association, the Jersey Youth Academy is an intensive educational program focused specifically on the Jersey cow and the many elements of the Jersey dairy business. Academy challenges participants to understand the long history and current growth of the Jersey breed in this country and shows them the opportunities and challenges of the dairy business in the future.”

Zina was informed of the AJCA’s decision in mid-January, a welcome new year surprise. “I didn’t think I was going to get in. It was a nice surprise – unexpected,” he said.

The process included filling out an application about himself and answering questions about what inspired him to be involved with the Jersey breed and part of the dairy industry.

Zina became interested in cows when his grandfather, John Kokoski, owner of Mapleline Farm in Hadley, who mentored him along the way, took him to the Tri-County Fair in Northampton, MA. Zina observed other youth showing their cows and receiving ribbons. “I remembered wanting to be that person getting a blue ribbon,” he said. “I had been at the farm prior to that, but when I saw all the other kids around the cows, and having fun, I wanted to be part of that.”

This became possible when his family moved from Ludlow to Hadley, just across the street from Mapleline Farm, and built their own house as part of the farm when he was nine – just a two-minute walk away – and started working at the farm right away. The farm, started in 1904, is a family endeavor.

“I started working in their processing plant. I thought it was pretty cool,” he said, and he still does, which partially answered the application’s question as to why he is interested in the dairy industry.

When he was 11 or 12, he helped with chores and with the calves, which he found enjoyable. Now a high school senior at Hopkins Academy, 17-year-old Zina keeps his 25 Jerseys at the approximately 300-acre Mapleline Farm, which are part of Mapleline’s 110 hormone-free milking herd that produces about 40,000 pounds of milk a week. The milk is processed in their onsite processing plant in plastic or glass bottles. With heifers and calves, they have a total of 275 cows. Zina helps with all the chores, including helping harvest the hay and corn needed to feed the cows. His cousins Austin and Henry Dizek also keep their Jerseys there. Zina’s younger sister, Sofia, 12, is also involved with the Jerseys. They all work on the farm. They also all belong to the Hampshire 4-H Club.

In the past, Zina would attend 4-H fairs at the state level, and attend Eastern States Exposition to represent Massachusetts as a 4-H contender. He was already acquainted with some of the other chosen students for this year’s Jersey Youth Academy, such as Brimfield’s Katelyn Poitras, from competing at fairs.

Zina bought a heifer from the sale of specially selected heifers to enter the National Jersey Association’s Pot O’ Gold Production Contest while attending the National Jersey Show on Nov. 4, 2017. The heifers are raised on the competitor’s farm and produce a calf, and whichever one produces the most milk wins (the farm tracks each cow’s milk production). Zina placed fourth for the 2020 Pot O’ Gold Contest, announced Sept. 8, 2020, with River Valley Tiramisu, who freshened with her second calf born in mid-October 2019. His cousin Austin placed fifth.

“I think that the people that are involved in the dairy industry are passionate about taking care of their cows and taking care of feeding America. It’s something I want to be around,” said Zina.

What has he learned working on the farm? “It has taught me dedication to something that I believe in. It’s a lot of responsibility. Working with my family and with animals has taught me patience,” he said.