Youth turn out for Dairy Day 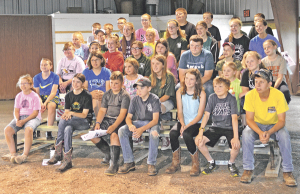 For most kids, school is out and summer vacation has begun – but that didn’t stop an enthusiastic group of young people from signing up and attending Youth Dairy Day in Shippensburg, PA (one of three sessions held throughout the state). The event provided an opportunity for youth ages 5 – 18 to learn more about the dairy industry through a series of demonstrations and hands-on sessions. While many of the youth were from dairy families, some were just starting to participate in dairy projects and others had no prior dairy experience.

After arranging themselves by age, the youth were divided into groups and sent to the first learning station – a lesson in cheese making headed by Extension educator Andrew Sandeen. As he warmed milk to make a simple cheese, Sandeen explained the characteristics of various cheeses. 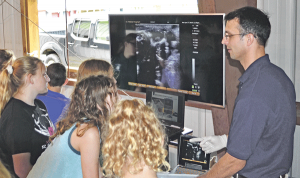 He also quizzed the group about cheese and fluid milk consumption in the U.S., the components of milk and what makes cheese taste good. Participants showed impressive knowledge of cheese types, and were eager to share their favorites.

After showing the group how a simple process resulted in cheese curds and whey, Sandeen shared illustrations of a large-scale cheese production and explained how various cheeses are made. At the end, participants sampled and identified various cheeses.

At another station, Penn State Extension educators Cassie Yost and Greg Strait teamed up to discuss the 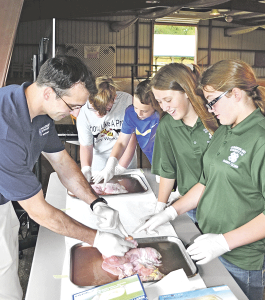 components of a ration for dairy cattle. The session started with sniff-testing feeds, including fresh-cut haylage, fermented haylage, corn silage, cottonseed ground snack food and other feeds used in a TMR for cattle. Youth learned the value of feeding fermented feeds to provide a consistent diet as part of a TMR, and the importance of particle length in creating a rumen mat.

Yost demonstrated the Penn State particle separator, a tool that has gained popularity around the world, and explained how the layered boxes can be used to determine the percentage of various particle sizes in the ration. Strait and Yost also explained that dairy farmers use precise measurements when mixing feed ingredients, and how those ingredients are carefully handled to ensure a consistent and nutritious feed for dairy cattle.

Penn State Extension veterinarian Dr. Adrian Barragan started his portion of the program with a discussion of the reproductive tract, including visuals on a screen to show the location of various organs. Next, Barragan discussed pregnancy checking and how that procedure is done. He also showed a video clip of an ultrasound and pointed out how identifying a beating heart on the ultrasound is the key to determining a viable pregnancy. 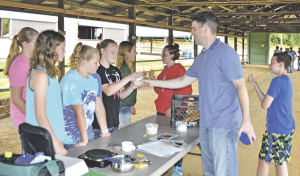 After a review of reproductive basics, participants donned gloves and identified the parts of the reproductive tract. The kids dug in and successfully located the cervix, the uterine body and uterine horns, ovaries and the corpus luteum (yellow body).

Barragan explained how the white and black tones on an ultrasound help identify different body parts, then performed an ultrasound exam on a pregnant uterus. He showed the group how to locate the various parts of the fetal calf by using the probe and viewing the screen.

While the group waited for pizza delivery, Extension educator Genny Christ provided important information about pesticides. While pesticide educators are faced with providing potentially mundane information about pesticide use, Christ presented information in an interactive manner with plenty of visuals and questions for the group. After clarifying the definition of a pest, Christ stressed the importance of reading and following label instructions on all products. 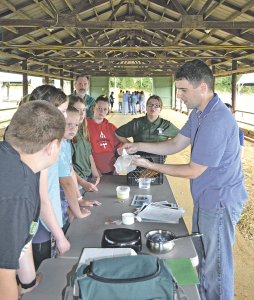 The final activity of the day was “The Great American Dairy Race,” a team event that included activities such as placing milk and other dairy products into various classes and identifying feeds.