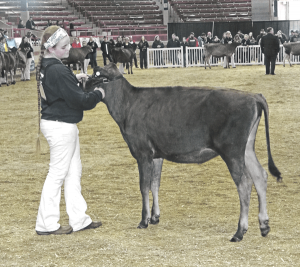 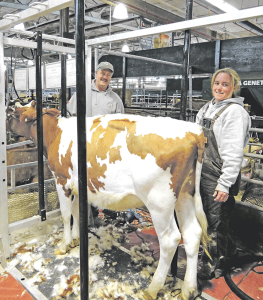 “It’s fun to show off how hard you’ve worked,” Jordan said. She also noted the Spring Dairy Carousel is important to the dairy industry.

“It exposes you to different animals that are sired by bulls you may not be familiar with,” she commented. “The right combination of a dam and sire makes higher milk production which is very important to the dairy industry.”

Diaz said Jordan has made her parents proud. She gets up to do chores every day at 5 a.m. before going to school and is back in the barn every night at 5 p.m.

“She’s really shown her dedication to her dad and I. She works harder than any kid I know,” Diaz said, adding the Spring Dairy Carousel is a favorite event of the family.

“This is always a great time, as it is the first show of the year on the East Coast,” Diaz said. “This isn’t a cheap hobby, but the relationships you form and the pride you have in your animals is truly priceless.”

Reynolds remarked that changes in this year’s schedule were made to promote attendance at the show: “With an abbreviated schedule, hopefully it was more economically friendly for exhibitors to come show off their best cattle.”

“It’s such a great event to kick off spring,” said Reynolds. “For people to get out and see great cattle, youth to compete in showmanship and judging and just to join together as a dairy community and enjoy everything cows for a few days!”