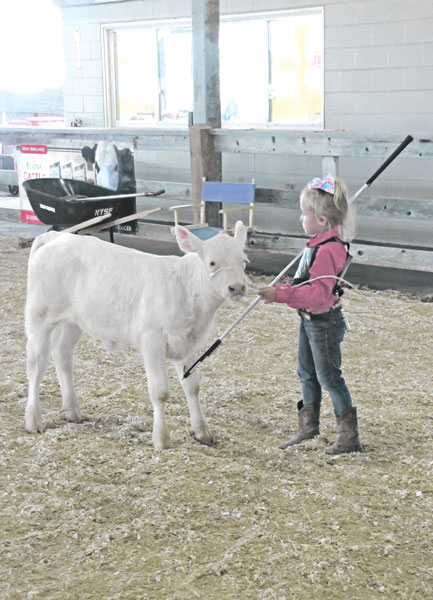 If young people are the future of the ag industry, a new program will take full advantage of their energy and enthusiasm.

The Northeast Beef Ambassador Program, initiated in 2020, provides an opportunity for youth ages 5 to 18 to learn how to advocate for the beef industry. Kaitlyn Swope, director of consumer affairs for the Northeast Beef Promotion Initiative, said the program is modeled after a similar effort in South Dakota.

“The folks in South Dakota reinvigorated their ambassador program,” said Swope. “Our Northeast program received from funding from the South Dakota Beef Industry Council. In working with them, they said it would be really neat if we could pilot a similar junior ambassador program in the region and see how much interest there is. We’re all working toward the same goal of building demand for beef.”

Swope said that while the South Dakota program was offered to youth, there are more opportunities for in-person engagement in the Northeast so the main aspects of the program were tweaked as to how the advocates would be used, especially last year.

“We put out information about the program through press releases and social media,” said Swope, explaining the initial phases of the effort. “Our goal was getting a good cross-section of folks involved from across the region.” The program is based in Pennsylvania and includes 12 states: Maine, New Hampshire, Vermont, Massachusetts, Connecticut, Rhode Island, New York, New Jersey, Pennsylvania, Delaware, Maryland, Virginia and Washington, D.C. Swope said one of the program goals is to gain widespread participation throughout the area.

With limited access to fairs and other livestock-related events over the past year, the first young ambassadors were put to work through social media posts and videos. “We created a monthly series of virtual workshops,” said Swope. “Some of the topics were cooking demos and holiday entertaining with beef.” A workshop in April was centered on sharing the story of the beef life cycle and sustainability. “The ambassadors pitched in with video clips specific to different sectors of the beef life cycle,” said Swope, “from cow/calf to backgrounding. The story was told through the ambassadors through pre-recorded video clips we put together to create a 30-minute workshop.”

The choice to share the beef life cycle through social media was the result of consumer research showing that beef consumers in the Northeast are different from the rest of the nation, primarily because most consumers don’t see beef cattle frequently. In the Northeast, people outnumber cattle 14:1, proof that consumers are far-removed from agriculture in general. “Northeast consumers claim to have less trust and low knowledge about how beef is raised,” said Swope, “but they’re willing to learn more. We’ve always found it resonates well if we educate about the people behind beef.”

Because the Northeast is large and diverse, members were kept informed and engaged through monthly Zoom meetings. Participants learned how to share information with consumers and how to engage people with the latest beef nutrition research. “During fair season, a lot of the ambassadors set up tables with information,” said Swope. “That came from the monthly calls and ideas from ambassadors to spread the good news about beef. It was successful, and several ambassadors went to different fairs throughout the summer and learned better ways to set up their tables and find out what kind of questions people were asking. It was an opportunity for them to grow as advocates.”

Anyone who has exhibited livestock in a public venue has likely been faced with someone asking tough questions about the industry. To help older participants learn how to handle such questions, Swope suggested participation in the Masters of Beef Advocacy (MBA), an online, self-guided program that addresses ways to deal with questions such as hormones in meat, grass vs. grain finishing and various husbandry techniques. “We encourage older members [high school age] to participate,” said Swope. “We also hosted a webinar in January with beef industry spokesperson Amanda Radke about how to become involved in the beef industry.”

Swope said in the first year, when the program was just getting started, members were added through word of mouth. In states where the MBA program has been widely adopted, there’s been a successful partnership with FFA to ensure members are MBA certified. “There’s opportunity to grow the [advocate] program through 4-H and FFA,” said Swope. Younger participants can become involved when parents are willing to guide and encourage them. “One of the younger members is about six, and his mom is a dietician we’ve worked with,” said Swope. “She helped him with some short videos.”

The Northeast Beef Ambassador program is present at a variety of consumer events across the region, and Swope hopes to continue gathering a solid group of young advocates to call on to attend events in their area. Although not all ambassadors will continue to raise beef cattle in the future, the skills they develop and hone through the program will serve them well in any career. Swope said the other positive aspect is that the program is in place as a resource for those seeking information about beef.

Although the program was started with the partnership and funding from South Dakota, it’s now primarily funded through the national beef Checkoff. Other state beef council funding partners also contribute to the program.

Young people interested in becoming part of the Northeast Beef Ambassador program can visit the website and contact Swope directly. “We’re just starting a new fiscal year and fine-tuning what we want year two to look like for the program,” said Swope. “Interested people can learn more about the program and how to get involved.”