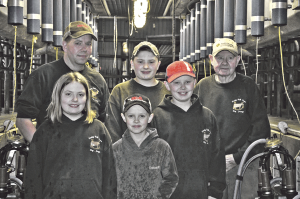 As for farming, in an article in the June issue from the National Dairy Council, Michelle Slimko, MPH, RD, commented, “According to the Food and Agriculture Organization (FAO) of the United Nations (2018), agriculture gives women the opportunity to make decisions for themselves, generate income, own land and improve nutrition. Currently, about 30% of U.S. farmers are women who care for more than 300 million acres.”

In northern Vermont and New Hampshire we have a prime example of a woman dairy farmer and a woman veterinarian working together as a team on herd health management. We find Jennifer McReynolds of Lucky Hill Jerseys in Danville, VT, and Dr. Megan Foy of Wood Pond Veterinary Services of North Haverhill, NH, as our focus.

McReynolds is no stranger to the dairy business. Her parents were dairy farmers in Monroe, NH, until they sold the milking herd in 1984, raising heifers after that. Jen, as she’s known, started in 4-H with a calf to show in 1985 at around eight-years-old. Jen was fascinated with genetics and breeding for improvement of the Jersey breed.

After graduating from the University of New Hampshire in 1999 with a bachelor’s degree in Dairy Management she wanted to go home to farm on her own. In May 1999 she took a job milking cows for Deb Yonkers and Vince Foy in Danville. In early spring 2000 she accepted a job as herdswoman at Molly Brook Farm in Cabot, VT.

In August of this year it will be 100 years since the family from Maple Grove, Quebec, began Lucky Hill Farm in Danville. Much has changed at Lucky Hill this past century. In 1999 they began building a freestall barn with another addition added on slowly from 2006 to 2008. In 2006 the McReynolds began construction of a new double 12 parallel parlor. The first milking in the new parlor was Jan. 31, 2007.

Jen and Henry have four children who are all actively involved in the farm. From helping with field work on the 610-acre farm (300+ acres in crops) to feeding calves to helping Mom and Dad milk the 170+ milking herd, it is a busy farm family – Luke is 15, Andy is 13, Abby is 11 and Nick is 10.

When asked how important she would rate her farmer/veterinarian relationship with Dr. Megan Foy, McReynolds answered, “Extremely important! Between her and the nutritionist, they are our second set of eyes keeping track of the herd. Not only do we rely on Megan for herd health every other week but she keeps track of our DHIA information to keep an eye out for problems that may be creeping up. She is our sounding board for anything health-related and is great at providing us with the most current information/studies etc., when it comes to keeping the cows/calves happy and healthy!” 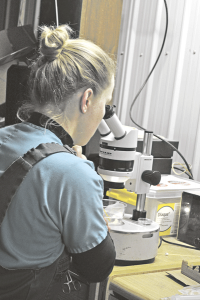 Dr. Megan Foy is no stranger to the dairy business either. Her parents were dairy farmers until about 2000 when they sold the milking herd. This is the same family where Jen went to work after graduating from UNH in 1999. Foy was about 12-years-old at that time. Jen remembers Megan as “just a little bugger.”

After high school Megan went on to the University of Vermont. She said, “I went to UVM on the Green and Gold Scholarship (best financial decision I have ever made – vet school is VERY expensive to go to these days!). I was in environmental engineering for about a year before I switched my major to Animal Science.”

The response from Megan to the question regarding the veterinary/farmer relationships was as positive and affirming as that of Jen: “I would say having a working relationship with my clients is extremely important! In fact, these relationships are one of my favorite parts of the job. When you spend a couple hours every one to two weeks with someone at herd health, you really get to know them. I think it is very important to develop a trusting relationship with all my clients. My job is to work with them to make health and welfare decisions that can often have major financial and emotional impacts. An example would be helping a farmer adjust their vaccination protocol that could cost (or save) them thousands of dollars a year. To make major decisions like this, they have to trust me, and to trust me I think they need to know me on a personal level as well.”

When asked if gender had any impact on relationships with farmers, especially female farmers like Jen, Megan added, “I’m not sure it makes a difference that both Jen and I are females, except that we can commiserate together about doing physical farm labor while pregnant!”

Megan and her husband are expecting their first child in the autumn of this year. Jen can “commiserate” with Megan on the rigors of working with large animals while pregnant. Jen sharing her experience as a mother of four may be a real help for Megan as she continues work as a pregnant woman in large animal veterinary practice.