Women in Ag: Involved and invested 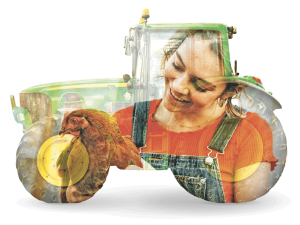 MADISON, NY – Once a month, if everything else goes to plan, a dedicated group gathers for a Women in Agriculture discussion group hosted by Madison County Cornell Cooperative Extension. Unfortunately, the March meeting didn’t get together as scheduled on March 4, but it’s all good. They’ll keep working and hopefully will see each other in April.

March is Women’s History Month, but it’s not just about what women have contributed to the world in the past. It’s designed to highlight the contributions of women both in history and in contemporary society. According to Tess Southern, ag subject educator and ag economic development, CCE-Madison, the contributions of female farmers continues to grow in importance.

In Madison County alone, the 2017 USDA survey reported 1,272 agricultural producers, 37.5% of whom are female. “That percentage doubled in size from the 2002 survey,” Southern said. “We were blown away by that number.”

The growth in numbers were similar across New York State and across the country. On 20,193 New York farms in 2017, there were 21,880 female producers. A total of 14,065 farms reported having a female principal producer, comprising 1.95 million acres of farmland. Those numbers have all grown in the past two decades – and that’s all the more reason discussion groups like the one in Madison County are important.

“The Women in Ag group is a spinoff from the Annie’s Project programs we’ve hosted,” Southern explained. Annie’s Project is a nonprofit organization which provides educational programs designed to strengthen women’s roles in modern farm enterprises, empowering farm women to become better business partners through networks and by managing and organizing critical information.

Nearly 20 women have graduated from the Annie’s Project programs hosted by CCE-Madison. “We have definitely seen those women make strides,” Southern said. “They’ve made improvements in their businesses, they’re using social media in a very focused, effective manner. They’re better at selling their products and their stories. They’re also more confident in making decisions on the farm.”

Topics previously covered in the Women in Ag group included how to take better farm and food photos to sell products, how to create a good email newsletter and even field trips to farms to witness rotational grazing first-hand. “We also always have a meal when we meet,” Southern said. “It’s all about food and fellowship. Our goal is just to expand everyone’s knowledge.”

As the faces running farms become more diverse, so too do their agriculture options. Southern is seeing different operations popping up in Madison County, including more vegetable growers and even some interested in producing cut flowers.

“I think we’ve always done a really good job of incorporating everyone in all that we offer,” Southern said. “We’re always adding new things. We also want to make sure women’s involvement on the farm is noted and supported. It’s important to me to empower other women, especially those involved and invested in agriculture.”

CCE-Madison is not alone – Cornell Cooperative Extension programs throughout the Empire State offer Women in Ag groups. Check with your Extension office to see when your local group meets, and celebrate female farmers this Women’s History Month.