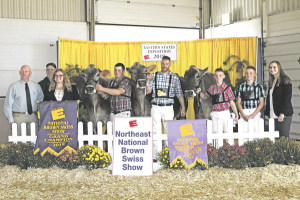 The Brown Swiss Cutting Edge CP Margo-ET aced the Open Northeast National Brown Swiss Show at the Big E in West Springfield, MA, winning the title of Grand Champion out of almost 100 cows. As though she was a Kentucky Derby winner, a blanket made of mums was placed upon her back.

Cutting Edge CP Margo-ET is owned by Allan Brisson, owner-operator of Allandra Farm from Vergennes, VT, for 44 years. He works full-time at the farm with his son and right-hand man, Michael Brisson.

“This is the first time we have won Grand Champion. Last year, she won Reserve Grand Champion,” said Allan Brisson, his hands full of prize banners and the silver platter. They milk 1,100 cows at their 2,300-acre farm. For the past six years, Brisson has been working with Brown Swiss. In his final remarks, the judge, Ricky Allyn from Canaan, CT noted that the minute Cutting Edge CP Margo-ET walked through the door at the ring, he was caught by her magnificence, her height, length and flatness of bone, her udder size and her presence.

“I’m very surprised, very pleased. She was Grand Champion at our local show – the Vermont state show. You never know how good the other cows are going to be at the Big E,” said Brisson.

The four-year-old cow has produced 100 pounds (12 gallons) of milk a day since she calved earlier this year.