While the sun shines

“The secret to good hay is knowing what you have, knowing how to market it and learning the art of making it.”

That’s what Mike Stefan, of North Collins, NY, says about the skills involved in making consistently good hay. Stefan started to learn how to make hay while growing up on the family dairy farm. After high school, he studied to be a teacher, but wanted to farm even after the dairy herd was sold. “I didn’t want to lose the farm, so we thought hay would be a good option,” he said. “I could work that in with a teaching job.” 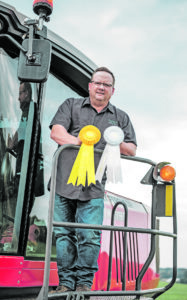 For the past two years, Mike Stefan has entered samples in the World Forage Analysis Superbowl. He’s placed 2nd and 5th, but said, “I’m doing the impossible making hay in the East.”
Photo courtesy of Mike Stefan

Although the hay operation was the initial enterprise, Stefan delved into serious field crop production. Every spring, after making the first cutting of hay on the home farm, Stefan and his sons follow the combines and bale straw in the Albion and Kent areas, then move southward through New York and Pennsylvania. “We’ve been doing that as a family for 17 years,” he said, adding that they’ve learned a lot from working on farms throughout the region. “We come home in time to do the next cutting of hay.”

In addition to making 800 acres of hay, Stefan currently grows 100 acres of oats, 900 acres of corn and 700 acres of soybeans. He also grows 450 acres of grapes for Welch’s. After more than 20 years of teaching technology, Stefan recently retired and is developing plans that will bring two sons into the business.

Because alfalfa doesn’t survive for long on the ground he’s farming, Stefan makes only timothy and orchardgrass hay, each grown as a separate crop. “Early on, with my dairy knowledge, I knew I didn’t want to sell bales of hay that were inconsistent in quality,” he said. Stefan’s high-quality hay is suitable for a variety of livestock including show cattle, horses and production dairy animals.

Stefan said timothy is the more challenging of the two hay types to grow. “We fall-seed timothy because it takes a while to establish,” he said. “We’ll get a light hay crop the first spring. It’s mostly for the equine and dry cow market. Orchardgrass is less challenging – we fertilize it and cut every 30 days.” Timothy typically yields well for about five to seven years, and although a stand can remain productive for longer, Stefan aims for quality and reestablishes timothy when a stand declines.

For the past two years, Stefan has entered a sample of hay in the highly competitive World Forage Analysis Superbowl held during World Dairy Expo in Madison, WI. Entries are analyzed by near infrared technology for relative forage quality. “If you’re going to make something good, you have to prove it’s good,” said Stefan. This year, his sample received fifth place in the grand champion hay class sponsored by Barenbrug USA. Last year’s sample placed second.

Despite his high placings, Stefan said he’ll probably never win a top place for several reasons, including the fact that straight grass hay won’t test as high as hays that contain some alfalfa. “I’m doing the impossible making hay in the East,” he said. “We’re trying to bale hay at 12% moisture in 70% humidity.”

It takes years to hone the skills necessary to make top-notch hay, and there’s more to it than waiting for good weather. “Hay is judged by the eye of the beholder,” said Stefan. “There’s also a huge expense in making hay. I’m rotating fields every seven years, and there’s the cost of seed, fertilizer, machinery, trucking and storage.”

While some hay producers replace equipment frequently, Stefan has a different philosophy. “I’m a fixer-upper, not a trader-inner,” he said. “I buy something used, put it in the shop, strip it down and fix it up. We’re very detail-oriented – it isn’t uncommon to see a tractor on my farm with 8,000 hours that looks showroom new. We pressure wash equipment and make a list of what needs to be fixed. Then we hand wash, wax and put it in the shop.” By owning his own trucking equipment, including six tractors and 14 trailers of various types, Stefan can move product on time. Stefan and his sons do most of the mechanic work, with help from a truck mechanic when needed.

Stefan’s business plan includes a piece of equipment that will him help meet the needs of the aging horse market. “We’re in an area with a strong retail market for hay that isn’t being served,” he said, discussing the high demand for small bales. “The hay press is an alternative to switching to different equipment to make small bales.”

The hay press slices and repackages large square bales. “It does it all on its own,” he said. “Hay doesn’t have to be fed into a baler. When the bales come out, they’re strapped together with nine bales in a block.” After processing, hay can be stacked on pallets for storage. Stefan plans to load processed hay into shipping containers and drop-ship to customers.

The press allows Stefan to continue making high-quality large square bales that can be reprocessed during the off-season. Although the reprocessed bales look different than traditional small bales, customers who have purchased hay at retail farm stores will be familiar with pressed hay. Stefan plans to have the press operating by late autumn.

With upcoming changes, Stefan said the next year or so will be full of ups and downs. “There will be a lot of business moves,” he said. “We bought an additional farm, we’re adding the hay press and my sons Dylan and Tyler are coming into the operation.” His children Ryan and Carissa are still in high school and will also have the opportunity to farm with the family if they so choose.

Although they’ll assist their father with hay, Dylan and Tyler will concentrate on the commodity crops as they continue to learn the finer points of preserving forage. “Making hay is an art form,” said Stefan. “They haven’t reached that level yet.”