What they want to do

UNADILLA FORKS, NY – Many people automatically think Motocross when they hear the name Unadilla, but located 11 miles north of that notorious racetrack is the hamlet of Unadilla Forks (also situated on the Unadilla River). It’s in this noticeably less noisy space that Chad and Cindy Hazekamp raise their Angus.

At C&C Farms, the duo are living out their dream. Chad’s family had a dairy while he was growing up, and Cindy is originally from southern New Jersey. Together, they bought their first two Angus females at a Trowbridge sale in 2013, with a plan of transitioning Chad’s family farm to beef. Jumping right in, they showed their first cow the following year at the New York State Fair. Cindy had experience showing dairy, so it wasn’t completely unfamiliar territory. Every year since 2014, they have competed in the state fair, moving up to win the Reserve Champion Bull in 2018. 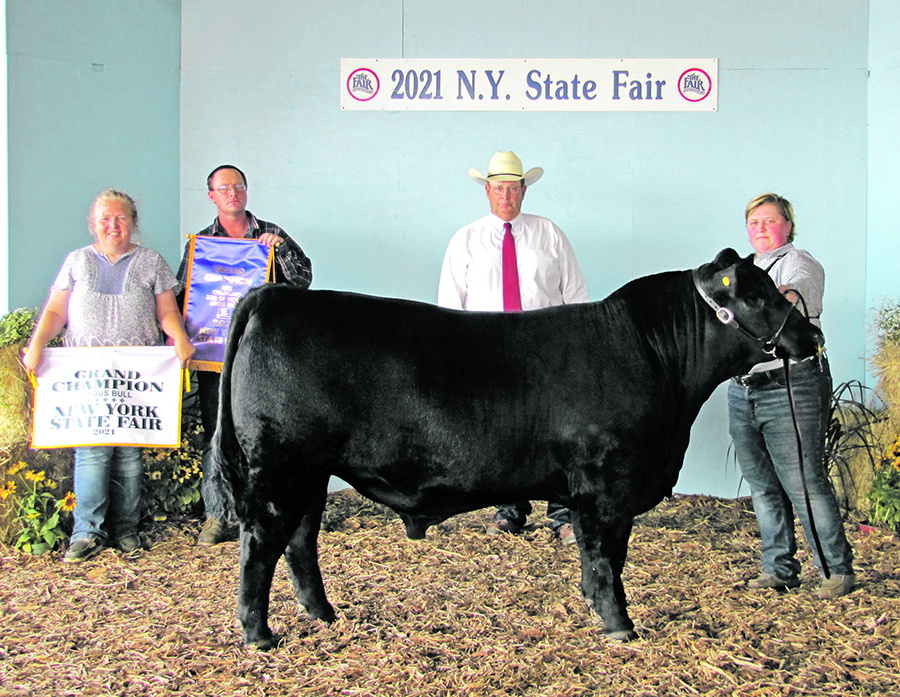 The Hazekamps sold their dairy in Richfield, NY, and moved their operation to Unadilla Forks in June 2018. Here, they have 78 acres for their herd of approximately 55 head of Black Angus. The move seemed to suit them and their cattle well, as in 2019 they earned an award from the New York Angus Association. This year was an important year for them as well, following the cancellation of many shows in 2020: Conversation Chaz won Champion Intermediate Bull at Keystone International Livestock Expo in Harrisburg, PA, in October, and earlier in the summer, he also earned the title of Roll of Victory Grand Champion Bull at the NYS Fair. (C&C Farms also won the Angus ROV New York Special, the best of any two head.)

“I love beef cattle,” Cindy said. “Our goal in life is to raise them, and we sell about seven bulls every year. It’s getting to the point now where we can sell heifers.” The big dream, however, is to eventually move out West, to Wyoming, to become full-time ranchers. Right now, both Cindy and Chad work full-time jobs off the farm, and Chad also does custom baling. “It’s a lot,” Cindy laughed.

All their cows are fed is grass and hay, and they regularly rotate pastures. Cindy said they keep the beeves on pasture as long as possible, providing shelter for them in the colder months.

“We’ve also worked with the local Soil and Water Conservation District to make changes to improve our soil,” Cindy said.

Their cows are bred via AI, after carefully taking into consideration both the bull and the dam. Cindy said they’re trying to do some ET as well.

Every step they take is one toward a predetermined goal. Cindy said they’d like to start selling feeders in the future to expand their offerings. 2022 will be the first year they’ll start consigning sales. They’ve already sold as far away as Midland Bull Test in Montana.

“Our goal is to get huge – this is our future,” Cindy stated. “This is what we want to do.”