What the NYS dairy industry has been up to 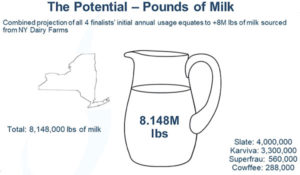 The New York State Dairy Promotion Order Advisory Board recently hosted a thorough, day-long update on all of its varied projects from 2020 recently, and some updates on what it would like to achieve this year. The Dairy Promotion Order, issued by the state’s ag commissioner and approved by the state’s milk producers, has producers pay 15 cents per hundredweight of milk for promotion. The board’s meeting was a good way to see where farmers’ money is going.

Milk For Health: Bethany Beiersdorf, executive director of Milk For Health on the Niagara Frontier, began by noting how the organization’s television outreach fared in 2020. By taking advantage of their nonprofit status, they were able to get low-cost and no-cost TV ads that ended up seeing more than 14 million impressions.

Streaming media was a new outlet for MFH last year. They only used YouTube last year, but saw over 100,000 impressions and a view rate of 50% for those who watched ads all the way through (which is a very favorable rate). Additionally, web and social media outreach was successful this year, and Beiersdorf noted they are hitting their target audience young women consumers.

“COVID-19 was a line item we added in for things that didn’t fit anywhere else in our budget,” she said. By spending $3,080, MFH moved 10,500 pints of milk and 2,358 pounds of yogurt that otherwise would have been discarded.

VentureFuel: Fred Schonenberg, the founder of VentureFuel (which links global corporations with startups and new technologies), recapped the New York Milk Launch competition, which featured over $200,000 worth of prizes to inspire innovation and investment in fluid milk within the Empire State. Schonenberg said pandemic restrictions were actually a boon for the contest, as it had better mentors and judges because they didn’t need to travel. There were 50 qualified applications for the Milk Launch (including 17 from Upstate NY and nine from NYC). All had to be familiar with the NY milk industry. They saw a wide range of concepts: functional beverages, enriched and ready-to-drink, fermented, whey, colostrum, upcycled, ultra-processed, toddler/infant and even alcohol products (“from babies to booze,” Schonenberg laughed).

“On average, it takes two to three years to launch a new product. We hope with this program, we condense that to three months,” Schonenberg said. The winner was announced in December, and fans and the judging panel both agreed on Slate Milk – which will source over 4 million pounds of milk in 2021.

NY Animal Ag Coalition: Executive Director Eileen Jensen spoke about the coalition’s “Dairy on the Moo-ve” program, which she felt was a huge success. It reallocated funds that normally would’ve been used for the Dairy Cow Birthing Center at the NYS Fair. The program kicked off on what would’ve been the opening day of the fair and featured live videos from 20 farms, covering milking processes, crop production, cow comfort and more. It was a popular program, with 1.2 million social media impressions.

U.S. Dairy Export Council: Presenting this update was Charles Timpko, senior vice president for operations, who talked about “the Next 5% – building U.S. dairy export volume from about 15% of U.S. milk solids to 20%” through a coordinated effort led by the Checkoff-funded Dairy Export Council and U.S. dairy suppliers. In 2020, culinary partnerships in the Middle East and Southeast Asia were expanded. The council partnered with two universities for research in China and Singapore. And they’re creating retail promotions in Middle East, which is one of the largest growing and youngest populations in the world. Timpko said U.S. dairy export value was about $6.6 billion in 2020 (versus $6 billion in 2019), so exports are seeing greater value and greater volume.

NED also has goals to create a positive image of dairy through outreach and grow consumer trust by connecting them with dairy farmers. Their third priority is to update consumers on dairy nutrition and dairy sustainability.

DMI: Paul Ziemnisky, EVP Global Innovation Partnerships, DMI, said their focus is on long-term sales. He noted Americans are consuming seven more pounds of dairy per consumer now than they were in 2018 – the highest amount they’ve ever consumed. The biggest growth areas are flavored milk and chilled coffee products.

Milk Quality Improvement Program: Housed at Cornell, this program is dedicated to the production, manufacture and distribution of quality dairy products. Key impact areas for them in 2020 were on-farm practices and raw milk quality; dairy product processing, quality and safety; consumer acceptance and sensory evaluation; and Extension services and workforce development. New York has a high number of dairy processing plants (only Wisconsin has more), and the MQIP has a long-term focus on retaining and expanding NY plant capacity.

The program provided support to dairy processors through over 100 in-person and virtual visits, performed over 4,300 microbiological tests and over 500 sensory tests on NY dairy products and amplified farmer investment through nearly $1.3 million in additional funding awarded.

In order to capitalize on the growth of local food trends from 2020, there is a move to increase the number of new, small fluid milk processors in the state. Overall, however, fluid milk quality last year was reduced from recent years (caused in part by medium and large Tier 2 plants that struggled to adapt to disruptions spurred by the pandemic). A focus in 2021 will be improving quality at Tier 2 plants. Tier 1 products had considerably improved rates of in-plant contamination with Gram-negative bacteria (possibly due to improved detection methods developed by the MQIP).

Conclusions: It’s obvious that COVID-19 stressed every part of the dairy industry in 2020, and the board determined that NY processors need strategies and training to improve the resiliency of the dairy supply chain to protect against future disruptions. Fortunately, MQIP’s work provides rapid, expert guidance to the industry thanks to the continued support of the state’s dairy farmers through Checkoff funding.

New York small fluid milk processors are poised to continue to take advantage of the local food movement and MQIP will provide the critical research to support their continued growth and quality and safety improvements.

Richard Ball, NYS ag commissioner, said, “It’s encouraging to hear how our partners adapted and adjusted [in 2020]. I saw an unmistakable optimism for our dairy industry.”