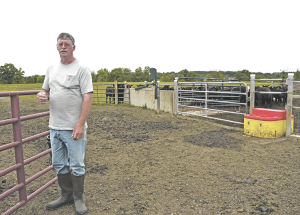 Given some acreage and a bit of time, nearly anyone can put weaned beef calves on good pasture and watch them grow. Sounds simple enough, but pasture management and grazing requires skill and attention to what’s happening in pastures – not just when pasture is growing, but throughout the season.

Although he’s quick to point out what he’s still learning, Mike Staub does grazing right. Staub recently hosted an NRCS pasture scoring training on his Pennsylvania farm. The activity benefited NRCS personnel who work with farmers to manage pasture more effectively, and also helped Staub learn more about what was growing – and why – in his paddocks.

Staub’s farm includes 51 fenced acres for grazing, but like all farms, each area is unique and requires management different from the rest. Staub and other graziers know that a single management plan for the entire farm doesn’t work, and that managing grazing requires frequent observation of paddocks and lots of notes.

“I’m doing a backgrounding operation,” said Staub, explaining his beef operation. “I buy weaned calves at 400 to 450 pounds from auction barns, mostly in Virginia. Once they’re here, I train them to electric fences because they don’t have a clue what an electric fence is.”

Young cattle learn to respect electric fences in a four-acre paddock surrounded by woven wire with polywire to divide the area into smaller sections. Staub observes young cattle closely as he manages pasture consumption through strip grazing, and allows them full access to pasture once they no long attempt to walk through hot wire.

Staub purchases a total of about 50 animals in two groups each year; half purchased in autumn, the rest in spring. When possible, he sources calves from one producer to ensure a more uniform lot.

Calves purchased in autumn will be sold in late July or August, but if summer growing conditions have been dry and grass is scarce, Staub has the flexibility of selling cattle sooner. The second group is sold in October if grass growth has been sufficient.

“I buy in heifers because they don’t cost as much as steers,” said Staub. “When I sell them, I don’t get as much as I would for steers. The margin of what I buy at and sell for is relatively the same as with steers, but with heifers I don’t have as much invested initially. For the same number of animals, it’s probably $3,000 to $4,000 less per group.” Cattle are sent to a nearby finisher when they reach 850 to 900 pounds. Staub said the biggest difference between raising steers and heifers is that heifers don’t convert feed and gain as efficiently once they reach sexual maturity and start to display heat.

Staub discussed how pastures and overall management on his farm have improved through working with NRCS on a variety of practices. One practice, a dedicated heavy use area, made a positive impact on mud reduction, cattle health and grazing land.

“Without it, I’d have what you see on the other side of it,” said Staub, pointing out a muddy lot adjacent to the heavy use area. “Even on high ground, it was a muddy mess when I was feeding animals.” The practice was under construction and completed in autumn 2018 between groups of cattle. In spring, once the ground is no longer subject to hoof damage, cattle go on pasture. Manure is scraped from the heavy use area and hauled for land application.

Cattle have access to the heavy use area through summer for water and minerals but are not confined in it during the grazing season. After seeing the value of the heavy use area, Staub said he’d like to add another to allow more flexibility in holding groups of cattle and cleaning the area.

At the same time the heavy use area was created, a laneway was added for moving cattle across a stream to additional paddocks. Water lines were installed to provide clean drinking water in various paddocks.

Through winter, cattle are fed baleage and dry hay. “I do forage tests to determine whether the quality is good enough to get along with just that,” said Staub. “Last winter I fed ground shelled corn for a while, then switched to supplement tubs. Cost-wise it was about the same, and less labor for me to use the tubs.”

Staub found that purchasing cattle in autumn and selling in late summer results in the best profit margin. “The big thing that can hurt in late summer is corn prices,” he said. “If corn is cheap, it works well. If corn is high, no one wants to pay for cattle on feed. Last year, I thought we had conditions that would allow stockpiling of grass, but I kept the group until October and they demolished everything I had so I couldn’t really stockpile.” 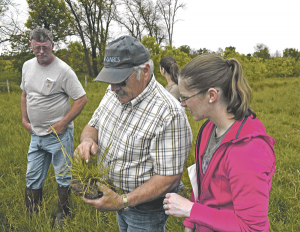 As a group of NRCS personnel walked through the pastures of Staub’s farm, they evaluated cover, identified plant species and noted problem areas. Although Staub has managed multiflora rose in the pastures by spot-spraying, he prefers to manage weeds through grazing. Staub is aware of low spots, areas of deep topsoil and the location of shale deposits and how those locations affect pasture growth and cover.

“We’re interested in keeping the ground covered because that’s what protects the soil underneath from the splash of whatever’s coming out of the sky,” said Titus Martin, NRCS grazing specialist. As Martin walked through the pasture and looked more closely at particular species, he assessed cover. He noted which species were cattle favorites, how each species recovered from grazing and total pasture species.

Martin pointed out the characteristics of various pasture species and the importance of observing what’s in pastures throughout the growing season. For example, a section of grasses growing in a circle indicates a rhizomatous plant growing horizontally under or along the ground, sending out new plants from young shoots. Such plants include species such as reed canarygrass and bromegrass.

Through his own observations, Staub has noted that clover is more prolific when other pasture species are sparse. To encourage more clover growth, Staub said he’d overgraze it in autumn and cross-seed with clover in spring.

As simple as it sounds, pasture management often boils down to taking a walk to check for cover, growth in low-lying and high areas, desirable species, weed species, clover and how cows deposit manure – and noting observations for future reference.