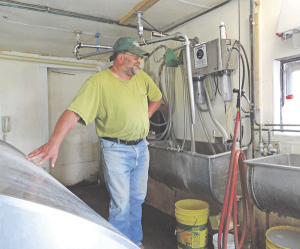 “CV,” distinguished as such to avoid confusion with his dad, Carroll, explained that his grandparents Leland and Anna Wade purchased the first parcel of the Steuben County farm in 1939 and then began adding on additional parcels over the years.

“They always had a traditional homestead farm, until 1952 when they decided to put on a full-fledged dairy,” CV reported.

Leland and Anna entered into a partnership of the farm with their son Carroll (former Farm-Aid Hero) in 1968, and were joined by his wife, Carrie Sue, in 1970.

Carroll and Carrie Sue became full owners in 1983. They were joined in partnership by their son, CV, in 1996, and currently, CV owns the farm and the herd that he developed.

“The dairy herd was initially 20 registered Holsteins, expanding to as many as 60 in the late 1990s,” said CV.

CV said he began experimenting with cross-breeding in 2001, finally settling on a Danish Red x Milking Shorthorn specific cross, that he reports has resulted in a herd with a rolling herd average of 11,000 pounds, 4.8-percent fat, and 3.7-percent protein on a once-a-day milking, with zero grain, and a completely grass-fed diet.

The farm, currently at about 35-head, was certified organic in 2005 and certified grass-fed in 2012.

CV explained the Red Dane is a composite breed from Denmark.

“They forged the breed by cross-breeding Angeln — their native cattle, with Red and White Holsteins and Brown Swiss.”

He said over the years this repeated, three-way cross produced the distinct Danish Red, a dual purpose breed; intended for both dairy and meat production.

“I’ve found that the Red Dane X Shorthorn-cross animals have a coarser, beefier frame,” remarked CV. “With our zero grain system, they hold body condition and component production better than any other crosses that I’ve tried. They also seem to have far less difficulty breeding back in a timely manner — and I’ve noticed they tend to be some of the calmest, gentlest animals I’ve ever worked with.”

The herd, which also has a few Ayrshire and Milking Shorthorns mixed in, are bred to Danish Red bulls or Milking Short horns, by A.I., with Creative Genetics of California bulls.

“They have developed a system called “Pro-Cross,” commented CV.

The farm is strictly a grass farm, with no crops, using grass-silage during winter months.

“Dad and Grandpa always grew corn on our farm,” recalled CV, adding that in the 80s and early 90s, silage yields were only 8-13 tons per-acre at best, which was well below average at that time.

“And we were getting 8-10 tons per-acre from the hay fields at that time,” he confirmed.

“Our soils on the farm are obnoxiously heavy clays and clay-loam, that hold water and bind nutrients. They are generally poor for corn and small grain crops, but excel at growing grasses, and they grow these grasses with far less fertilizer and seed inputs than expensive crops, like corn and soy — both of which take tremendous amounts of input.”

“In 1994, Dad and I just decided to stop the agony of fighting for a corn crop, and switched to an entirely grass and legume based system. And we haven’t looked back.”

That move opened the door for the herd-grazing system — and for obtaining an organic certification.

CV said poly wire and step-in posts were used for the grazing herd for about the first 10 years.

“Moving the wire from paddock to paddock, on a daily basis, proved to be too time consuming,” he admitted, calculating, “Two to three hours a day to set one up — and tear another down, while they were on a third section actually grazing. Then, at the end of the year, everything had to be picked up and brought in for the winter.”

CV said the procedure was labor intensive and not always effective at keeping the cows in.

“Lots of chasing bovines about the place!” 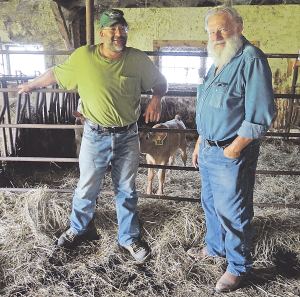 “Very early on, we started looking for options to finance a permanent perimeter, high-tensile fence. The first grant we applied for and received was from the federally sponsored Chesapeake Bay Foundation.” Wades were granted $30,000 in 2007 to build about 3 1/2 miles of 3-strand fence for the milking herd, with a 3-year completion target-date.

“Sadly, the budget for the CBF has now been completely gutted,” reported CV. “Funds are no longer available for farmers interested in such projects within this watershed.”

In 2009, Wades applied for an EQIP grant through the Soil Conservation Service to build fencing for the heifer herd and other projects.

“But, they rejected our first attempt. Second time around, following out Extension Agents advice, we combined all of the portions of the plan into one big grant request, which included around 9 miles of 4-strand high wire fence and a nearly half-acre farm pond, plus reconstructing a diversion ditch that split a couple of the paddocks. The grant request ended up being nearly $80,000, and, much to our surprise, they approved. They gave us five years to complete it all, and here’s where we got in a little hot water,” said CV, “we did it all in one year. Eventually, we were able to get clearance and justification for it because of the new 2010 National Organic Program grazing mandates that were going into effect. So, it all worked out.”

CV said these projects achieved the intended objective of protecting the Chesapeake watershed by limiting access to creeks, streams and ditches on the farm and allowing for development of creek-side buffers near paddocks, while increasing efficiency of grazing and promoting improvement in forage quality and yield.

Wades said they like Albert Lea seed mixes for the paddocks and fields.

“They have a great forage mix, which we often add trefoil, Alsike clover and red clover to. We also do a lot of frost seeding, usually in November or December if it looks to stay cold enough that the seeds don’t germinate until spring.”

Fescues, Timothy, Brome grass and rye grasses all play a role in their forage plan.

“I suppose our system could be called customized,” said CV thoughtfully, “in that it’s specifically tailored to our farm’s geological layout and soil conditions, water access and availability. But, with grass-fed, organic certification, there are certain mandates that must be adhered to; days on pasture (150-days minimum); dry matter intake from pasture (60% minimum); access to shade, etc. Those mandates govern just how we are able to customize the system.”

Wade’s cows are certified for both dairy and beef, with a “dairy-cull beef” tag. They are shipped to Nicholas Meats in Pennsylvania and marketed under that company’s label.

CV said farming is not all sunshine and roses.

“It’s the full spectrum of chaos from positive to negative. It’s very easy to get discouraged and frustrated. Things don’t always go right, and you need to maintain that eternal optimism to survive. Surround yourself with people that help you do that. Diversify, don’t put your eggs in one basket. Don’t be afraid to put up a greenhouse or two to grow fruits and veggies to supplement your farm income. Don’t be afraid to plant some fruit or nut trees. Don’t be afraid to grow a field of sunflowers or hemp. If you want to stay small, accept the reality that,” he advises. “Don’t be afraid of embracing regenerative agriculture. Biodiverse agricultural management is a powerful force for the right kind of change the industry needs — that the world needs. Holding to the conventional farming methods just won’t do going forward.”