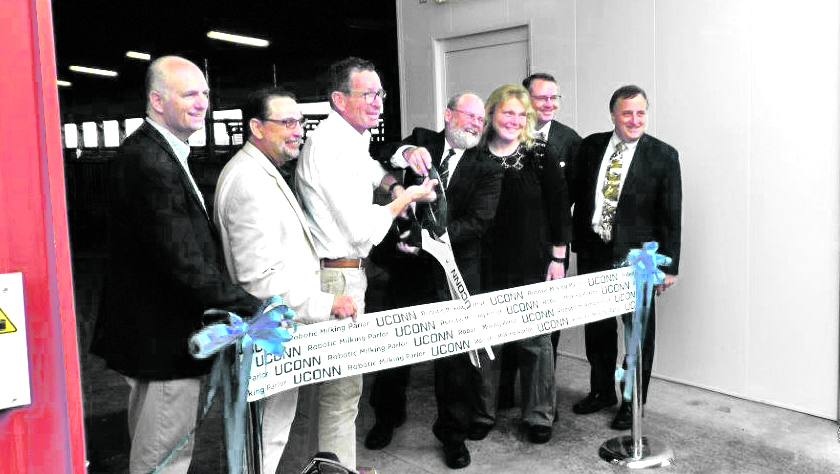 by George Looby
On Sept. 7, 2018, a new milking system was dedicated at the Kellogg Dairy Center at the University of Connecticut in Storrs. This system is designed to make more efficient use of time, labor and cow comfort and represents a considerable departure from most of the milking systems now in place. For many of the readership, mastering the art of hand milking remains a vivid memory.

If the innovations now in place at UConn become the norm, future generations of dairymen will never experience the delight of a soggy cow’s tail swiping across one’s face at an early hour as the milking unit machine is attached, or better yet sitting on a milk stool with a pail between your legs as old Bossy gives you a quick wake up swipe.
Dr. Steven Zinn, chairman of the Department of Animal Science, served as master of ceremonies for the event. He recounted many of the trials that he and others endured in bringing the new system to fruition. Zinn said that it was a collaborative effort by the Department of Animal Science, the Office of the Dean of the College of Agriculture, Health and Natural Resources (CAHNR), the Provosts Office and the UConn Foundation. Among the invited guests were Gov. Dannel Malloy, Commissioner of Agriculture Steve Revitczky, Provost Craig Kennedy, Interim Dean of the CAHNR Cameron Faustman, State Rep. Gregg Haddad and staffers representing Sen. Chris Murphy, Congressman Joe Courtney and Sen. Richard Blumenthal. Many of the participants stressed the importance of the CAHNR to the overall economy and wellbeing of the state.
The credit for initiating the concept of a Voluntary Milking System (VMS) at the university goes to Mary Margaret Cole in her role as the executive program director for the Department of Animal Science. Her responsibility is overseeing all of the livestock activities on campus and ensuring they are conducted in such a way as to provide the best possible interaction for both students and researchers. Zinn suggested that when this idea hit his ear he responded in the way any good administrator would, saying that he would study the request. The new system became operational in May of this year.
Zinn gave credit and thanks to all of those who, over time, became enthusiastic supporters of the project. Such responses are not always the case when major changes are proposed within a university system. Thanks were also extended to the Delaval Corporation and its local representative, Handfield Dairy Equipment of Franklin, CT, a company that the dairy department has dealt with for several generations, for the installation.
Introducing a herd of cows to a new system can be a challenge but pitting a herd against a group of well-trained academics and highly experienced dairymen proved to be no contest. In a matter of weeks, the cows were all cooperating at the expected level with the reward for cooperation a carefully calibrated measure of mixed ration. The amount fed is based on many factors, including production, age, stage of lactation and body condition, among others.
With the VMS, cows are milked by the robotic system when the individual cow has the urge to be milked. Prior to this system, cows were milked when it was deemed appropriate by their owners. The VMS is programmed to allow an individual high producing cow to gain access to the milking area up to six times a day. On the opposite end of the scale, the cow producing at a marginal level will be milked on the more conventional two times a day schedule.
Each cow is fitted with a transponder that is capable of storing a large amount of information, from identifying the individual cow and her status to doing the teat dip after milking and all of the steps in between. It is reported this is done with a greater than 99 percent accuracy.
A 3,000-square-foot addition at the west end of the existing dairy barn holds the two milking areas. These are located on either side of the barn’s existing center alley and consist of a holding area, the milking area itself and an exit alley to allow the cow back into the main barn once milking is completed. All gates are fully automated, allowing a cow access if the milking area is empty and allowing her to exit once she has been milked.
Those cows that are not up for milking at a given time are gently ushered out. The UConn herd is a mixed Holstein-Jersey herd, so as cows of different sizes make their way through the milking stall the size of the stall adjusts automatically to fit their size.
To reduce the system to its basics, a cow has the urge to be milked so she enters the holding area adjacent to the milking stall. If unoccupied, she enters, and if the system accepts her as an animal to be milked her teats are washed prior to milking and the units are attached. Not only are the teats washed but there is a stimulating effect incorporated into the system that stimulates oxytocin release, ensuring maximum milk letdown. As each quarter is milked out, the unit detaches automatically. When all quarters are milked out, the teats are given a post milking dip. There are many subtle, built-in interactions going on the entire time the cow is in the milking stall designed to increase cow comfort and udder health. Many of these might escape the attention of the human milker, as many are too fine to be detected by a busy milker.
For anyone wishing to learn more about robotic milking, the UConn College of Agriculture, Health and Natural Resources together with a number of co-sponsors will be holding a conference on Friday, Oct. 26, 2018 at the W.B. Young Building to present the latest information about this new technology. For information and to register see s.uconn.edu/roboticmilking or call 860.486.2413.