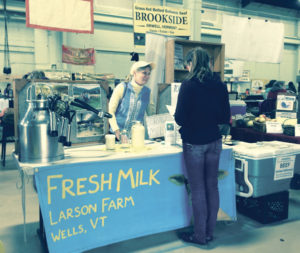 “The one constant in this business is change.”

Despite having the same profession his ancestors have had for over a century, sixth generation dairy farmer Rich Larson knows that little else stays the same.

Originally dairy farmers in Sweden, his family eventually immigrated to the U.S. and began a new operation in Connecticut. In 1976, after studying dairy science at the University of Connecticut, Larson relocated to Wells, VT, and founded the Larson Farm. Situated on 300 acres, the farm today actively uses 125 acres for dairy operations.

“We were a commodity dairy until 1993,” Larson explained, “but by then the handwriting was on the wall. Dairy operations were getting bigger, and there were fewer of them. There used to be over 3,500 dairies in Vermont. Today, I think there are about 600.” With declining milk prices and profit margins getting smaller, Larson felt he couldn’t realistically compete in that sphere. He decided his farm needed to change its focus.

“We started concentrating on producing raw milk. There is a very good client base for that here,” he said. Vermont allows for the sale of raw milk on site at a dairy as well as at farmers markets. At the same time, a number of local cheesemakers began purchasing Larson’s raw milk. After a dozen years of using this business model, Larson saw the need for another evolution. Realizing the advantages of vertical integration, in 2015 Larson Farm opened its creamery and on-site farm store. “We started the creamery with both raw and pasteurized milk, gelato and yogurt,” he said.

The farm store has seen its operations grow and change tremendously in the past six years. “The farm store has been very successful. We really expanded this past year due to the COVID-19 shutdown. Onerous restrictions really hit the farmers markets hard, and for a long time people were avoiding grocery stores. Our customers were absolutely thrilled!” Larson said. “They could come to just one location to get local farm grown, nutrient dense foods.” Drawing from producers in a 25-mile radius, Larson’s farm store sells vegetables, honey, bread, herbs, pork, eggs, fish, salami, coffee and cheese. He laughed, “They could get everything they needed during the shutdown – except toilet paper! We couldn’t help people when there was a run on that!”

The cheesemakers in particular were grateful to have Larson carry their products. “They saw a dropoff of something like 60% to 70% in their sales during the shutdown,” he noted. Quarts of plain grass-fed organic yogurt are the store’s surprise best seller. “The yogurt brings us a lot of repeat customers.”

Taking advantage of the burgeoning agritourism industry, the Larson Farm has introduced a farm stay option. “Our farmhouse was built in the 1930s and is recently renovated, but retains its period charm. There is a large fully equipped eat-in kitchen, living room with wood stove, and upstairs, three bedrooms and a full bathroom. The floors are all narrow hardwood. From the large screened-in porch on back, you can sip morning coffee and watch the sun rise over the mountain,” Larson said.

In 2021, the Larson Farm looks to continue its never-ending transformation. Larson pointed to new infrastructure improvements, such as doubling the facility’s yogurt processing space as a step toward a more successful future. His products are already sold in eastern Massachusetts (namely the north shore of Boston) and south along the Connecticut River. Larson is setting his sights on breaking into the Hudson River Valley area. “You have to go where the money is. And you have to go where the discerning customers are,” he said. “I know that I can’t compete with a lot of the low prices out there. We win people over with our quality.”