BEECHER FALLS, VT — Gov. Phil Scott and members of his administration visited Essex County — one of the three counties that make up the Northeast Kingdom (NEK) — on Monday, Feb. 24, for its “Capitol for a Day” initiative to spend a day in each of Vermont’s 14 counties.

Having the governor and cabinet spend a well-planned day of visits and appointments outside Montpelier is designed to give local constituents, municipal leaders and other partners a chance to connect face-to-face with commissioners and staff.

“We need to understand how policies impact Essex, Orleans, Caledonia and other counties,” Scott explained when he opened up his 9 a.m. cabinet meeting of 20 commissioners, deputy commissioners and staff at the Beecher Falls Volunteer Fire Department (BFFD) on the grounds of the Ethan Allen furniture factory, sawmill and kilns near both the borders of Canada and New Hampshire in a section of Canaan.

The BFFD spokesman, one of only four volunteers who still works for Ethan Allen, explained that attracting young permanent volunteers is impossible because “there’s nothing here to keep them.” Career and Technical Education students come to learn how to tune and repair the engines and other mechanical equipment and to qualify as First Responders, but when they graduate they move away.

The BFFD responds to fires and medical emergencies in two states and Canada.

“Today we’ll do a lot of listening and share this region’s hardships,” Scott said. “Families are struggling to get by, and youth don’t stay.”

After each discussed their plans for the day, cabinet members split up into several groups to meet with educational leaders, check out infrastructure and telecommunications projects, visit April’s Maple café and sugarhouse on an 800-acre sugarbush, and to see town clerks, healthcare facilities and recreational opportunities. 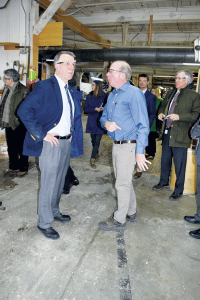 There, via Skype, Ethan Allen president Farooq Kathwari spoke to the Scott cohort from corporate headquarters in Danbury, CT. He apologized for not being in Vermont but explained that he was holding a top-level meeting that could result in developing new products that could impact Beecher Falls. Last year, jobs were shifted to Vermont from a North Carolina factory.

Kathwari said he’s pleased with Vermont’s top-notch qualities: natural resources, mountainous beauty, worker talent and craftsmanship plus a focus on environmental responsibility and work safety that has led to a pride in workmanship.

“We all need to put our heads together to come up with solutions,” Kathwari concluded.

Wood reported that between 101 and 103 employees are on payroll at Beecher Falls, that serves as a support plant to the Orleans factory 50 miles to the west where 287 employees work.

“Here we have an active log yard, a sawmill and 10 kilns in operation, and rough panels are made in the factory and then shipped to Orleans,” he explained. “This number could grow by nearly 20 employees this year. Since we have a strong workforce, our goal is to increase our machine capacity.”

The relatively low-grade logs — mostly soft maple, but also red oak and white birch — that are hauled to Beecher Falls are harvested in eight states, but these raw materials are mostly cut in Vermont and New Hampshire.