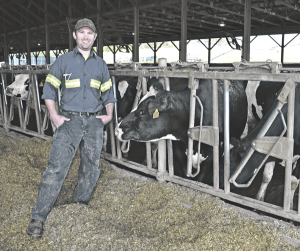 Her parents, Bonnie and Richard Hall, started as owners of the “home farm” in 1963 when they were very young, Clara explained in a farmyard interview that included her mother and her twin infant daughters. Even then, her parents were primarily concerned about the future of their farm, their families and their employees.

“Working with the Vermont Land Trust, which uses permanent land conservation as a way to make land affordable, made a huge difference, allowing us to acquire more farmland that we ever could have otherwise,” Bonnie explained.

Fifteen years ago, Bonnie and Richard’s nephew, Tucker Purchase, became the third owner. Later, Ricky Hall, the oldest of their three children, became the fourth owner, followed by Clara as the fifth. About 1,000 Holsteins are now milked on the home farm.

Isabel Hall, who is Ricky and Clara’s younger sister, might in the future also opt for the ownership track, Bonnie pointed out.

The longstanding mission of the Fairmont Farm ownership team is “to be a profitable dairy farm with the utmost consideration for the safety and happiness of our people, the cleanliness of our environment and the health of our animals.” Over the last five years, in which depressed milk prices have mostly dominated, capped by the disruptions of COVID-19, the ownership team has invested energy and dollars into two entrepreneurial efforts: a genetic enterprise and by diversifying the species of animals it breeds and raises to meet a growing demand for local meat for home-cooked meals.

“Our family is passionate about breeding and raising great cows,” Clara explained. “When we purchased ‘The Haven’ satellite farm in 2014, one aspect that excited us was that it would become a great facility for a genetic enterprise. We’ve focused on just a few select cow families at a time.

“Right now, we keep six ‘matriarch cows’ that have exceptional qualities,” she continued. “We use technologies with these Holsteins like IVF and flushing to speed up our genetic progress and to increase the number of these offspring in our herd. We’re lucky to have a large selection of recipient animals capable of carrying embryos from these matriarchs.”

Clara is happy to report on the success of this enterprise. “We have three cows that have made a huge impact in our program: Co-op Moonboy Rescue-ET; VT-Pond-View Atwood Lady; and VT-Pond-View Gold April-ET,” she said. “Rescue has over 200 offspring, including over 10 bulls that have been sold to stud companies. Both Lady and April have over 50 offspring, including those with All-American nominations. Currently, we are working with some new families, including both Ms Apple Andralyn-RED-ET and Craigcrest Rejoices Sydney-ET.  In 2018, we held our first genetic sale, ‘Favorites of Fairmont,’ and planned to hold one every two years. Unfortunately, due to the pandemic, this year’s sale was postponed.”

Fairmont Farm’s diversification enterprise is centered on its other satellite farm – “The Dairy” – in Craftsbury. The 400 Holstein cows there are now primarily bred with beef cattle semen, and their calves raised for sale in the direct-to-consumer beef market.

“We’re also raising pigs and lambs for this regional market,” Clara said. The nearby cities of Barre and Montpelier have a combined population of 16,000, plus there’re several good-sized towns, she noted.

The ownership team formally meets at least once every week, Clara and Bonnie explained. Each owner has specific areas of responsibility, but sometimes there’s overlap, because of deep interest or knowledge.

Fairmont Farm leans heavily on Cornell Cooperative Extension and the University of Vermont occasionally, Clara said. They seek advice from nutrient and other vendors, bank loan officers and other consultants, including family members who are not owners.

“We crop over 3,500 acres of land in 11 cities and towns in Vermont, and we own nearly 1,700 acres of conserved land on which we must live up to specific conservation easements,” she explained. “Our cows are housed in barns that include fans and sprinklers, cool, clean sand beds, plentiful water, nearby food, fly control and scratching posts. Cows are milked three times a day, bringing them under regular scrutiny. Milking parlors are operated 21 hours a day, with three hours devoted to cleaning – one hour between each milking.”

Clara said Fairmont Farm is an Agri-Mark member. “Our milk goes down the road to the processing plant in the town of Cabot to be made into Cabot products,” she said.

Fairmont employs approximately 35 employees, many of whom are long-term. “We keep much of our business local and support other nearby businesses,” Clara said. Fairmont has made substantial investments in both technology and practices that are good for water quality and soil health, and to mitigate the ill effects of climate change. Relatively recent investments include nearly 100% no-till planting since 2008, stormwater management, manure management designed to reduce soil compaction, manure injection technology and manure storage with sufficient capacity to allow it only to be spread under optimal conditions.

Fairmont Farm grows 60% of its cows’ diet by putting up high-quality haylage and corn silage, with the balance made up of high-quality purchased grains.

Fairmont Farm and the family ownership team was named the 2017 Vermont Dairy Farm of the Year, an award sponsored by the New England Green Pastures Program, which each year recognizes an outstanding dairy farm in each of the six states.