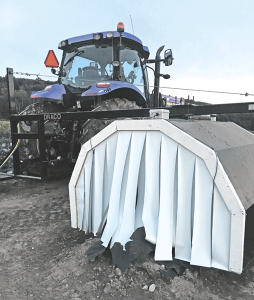 UV light is presenting farmers with new opportunities for controlling diseases as a complement to or replacement for pesticides. The germicidal effects of UV-C have been widely known for a century, explained Nick Skinner, a research specialist at the Lighting Research Center (LRC), part of Rensselaer Polytechnic Institute.

“It is widely used to kill pathogens in water and in HVAC systems. It is also used for pasteurizing products like apple cider without using heat,” he said. “We believe that the application of UV-C to crops would have similar results, and results thus far have been very promising.”

Farmers are concerned that pathogens are becoming resistant to conventional fungicides, presenting financial and environmental challenges. Research trials conducted by the LRC have shown it to be effective for killing powdery mildew and downy mildew. It is also expected to be effective against other fungi, bacterial and viral diseases on surfaces and possibly certain insects.

“Resistance isn’t believed to be a problem with UV-C since it works by causing random changes to the DNA of the pathogens, making the development of resistance very difficult,” Skinner said. “This is very important for conventional and organic farmers alike.”

The LRC has received grants from multiple organizations including the New York Farm Viability Institute and the USDA to investigate how to effectively dose crops with UV-C. These research initiatives have resulted in several unit designs for use on fruit and vegetable crops grown in plasticulture, according to Skinner.

UV lights cause damage in the DNA that make up pathogens. Many organisms have developed defenses against this type of light because it is the blue light emitted by the sun. To be effective, UV-C treatments should be performed after sunset and when there is a period of darkness (ideally up to four hours) after the treatment.

The “Dragon” UV array developed at the LRC is tractor-mounted so that the unit passes over each crop row as the tractor drives by. More than 90% of the lamp optical output is UV-C light, but some visible light is emitted that can be seen as a blue glow, according to Skinner.

Each crop requires testing to determine an “optimal dose.” Based on field trials, a dose of 200 joules per square meter (Jm2) once per week is effective for strawberry powdery mildew and is a decent starting point to optimize management.

“The length of applicator and dose determine the tractor speed,” he added. “The germicidal action of UV-C occurs only during treatment, and so during times of high disease pressure two treatments per week may be required for optimum control.”

In Geneva, NY, researchers at Cornell AgriTech recently announced a partnership with a Norwegian-based company called SAGA Robotics. Together, researchers are working on developing the first commercially available autonomous robotic units, specifically for vineyards. However, Skinner said that for $5,000 – $6,000 and 40 – 60 hours of construction time, farmers can build their own UV light treatment equipment right on the farm.

“The Lighting Research Center has published plans and illustrated instruction documents for several unit designs of varying size and shape on the lightandplanthealth.org website,” he said. “The unit designs featured were engineered to be constructed from readily obtainable materials in a modest farm shop. Anyone interested in trying UV-C on their farm should start with these resources.”

The return on the investment

“We have seen very good results treating powdery mildew with UV-C, and there is preliminary evidence that UV-C exposure may induce a prophylactic effect against downy mildew in some crops like cucurbits,” he said. “However, the efficacy of UV-C against other pathogens has not yet been studied widely, but efforts are being undertaken to study these effects currently.”

Prior to operating any UV equipment, personnel should understand how to work safely around UV equipment. The LRC has developed and published a UV safety document at lightandplanthealth.org. Safety doesn’t need to be hard or complicated, but it does need to be respected.

“Operators should be familiar with the safety measures for working with UV-C sources. UV-C can be injurious to exposed skin and especially to unprotected eyes,” Skinner said. “The use of PPE can make the use of UV-C safe.”

The LRC and other institutions that are actively researching UV use on crops are presenting project results as they become available. Skinner encouraged farmers interested in the technology attend a presentation and speak with the presenter to learn more.