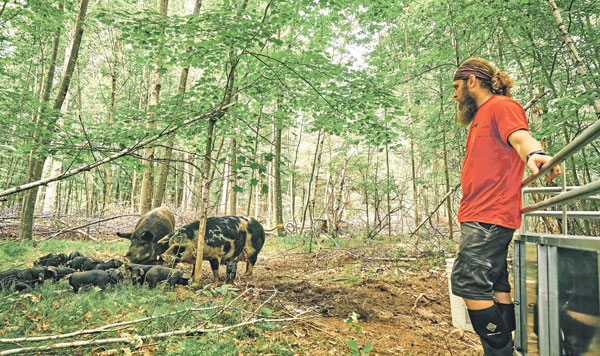 “We bought a 40-acre farm because that’s how much acreage we determined was necessary to raise our eventual goal of 150 pigs,” said Danielle Larese of BOTL Farm. Danielle and her partner, Nick Weinstock, purchased the property in 2016. Nick farms full-time and Danielle works remotely as a civilian scientist for the federal government. Located in northeast Connecticut, the part of the state known as the Quiet Corner, their town of Ashford is about 30 miles northeast of Hartford. Pastured pork is the main economic driver at BOTL Farm, but Danielle and Nick also raise 15 sheep, 15 goats, 100 production layers and 140 layer chicks.

The farm is divided into two 20-acre parcels by the Mount Hope River. Currently, they only farm the east parcel. At one point, there was a road between the parcels, and although they’ve improved the lane, they recently received NRCS funding to make further improvements. This will provide better tractor access to the west parcel and allow them to meet their pork production goals. In 2021, they will market about 40 pigs.

The eastern parcel is enclosed by a unique perimeter fence designed by Nick, who has a professional background in construction project management. “The fence is a combination of a physical fence and electric fence,” Danielle said. The physical fence consists of four-foot-high cattle panels mounted on galvanized T-posts. The electric fence has eight strands of low-tensile wire divided into three zones.

Nick said, “The bottom zone has an electric strand inside and outside of the cattle panel and is only a few inches off the ground. We can turn the line off completely for a snow or grass load. Line two is also its own zone. The remaining four lines make a zone. The upper two, which extend to six feet, are for predators coming up and over the fence.”

The 20 acres is further divided into permanent half- to one-acre paddocks with four single strands of low tensile fence. Nick uses portable electric netting to make daily paddocks. Only 3.5 of these 20 fenced acres are open. When they arrived on the property, these open acres were dominated by multiflora rose, autumn olive and poison ivy. “With just animal control, though, we’ve converted over to a very diverse grass, forb and sedge stand,” Nick said. “We have a lot of orchardgrass and red clover with some white clover.” He would like to improve the diversity of the pastures through frost seeding, but he is currently focused on raising the pH by spreading lime at a ton and a half per acre per year until pH is stabilized.

They are slowly, selectively clearing the other 16 acres to be managed as silvopasture. After attending a class in silvopasturing and walking through the land with a forester, Nick is more consciously managing this wooded resource. Currently, he is focused on removing shrubs (primarily the multiflora rose) and selecting trees that will eventually be saw logs. He’s also interested in cultivating a forest species that will produce a marketable good, such as nut or maple trees. “So far,” he said, “we’ve been grazing the sheep and goats together, followed by the pigs, rotating them through the woods just as we do through the fields. The multiflora rose is mostly gone, grass is established behind and it’s opening up nicely without removing larger trees.”

After years of moving water in 250-gallon totes, in 2021 they installed a poly water line along the main lane with spigots every 200 feet. By attaching jumpers to the spigots, they can now fill water tubs located in all of the grazing paddocks. Their house well is the current water source, but they plan to drill a farm well.

All of the livestock on the farm is Animal Welfare Approved by A Greener World (AGW), based in Oregon. The pigs are Magalista and Berkshire crosses. Currently, they have three sows, though this will increase to five in 2022, and eventually to eight. They breed using AI (typically Large Black semen) with a target of 1.5 litters per year. The target finishing weight is 200 to 300 pounds, which takes six to nine months to reach. To achieve this, they feed 1,000 pounds of corn-free and soy-free organic feed per finished pig.

In addition to their Animal Welfare Approved status, the sheep and goats are also Certified Grassfed by AGW. The goats are Kikos, a meat breed originally from New Zealand. The sheep, mostly the Icelandic breed, are also raised for meat, though they do pull the fiber and have it made into socks. They also sell finished lamb skins. During the non-grazing season, the goats and sheep eat a ration of purchased dry hay and alfalfa silage.

The layers are rotated into areas that need fertility improvement. Their shelter, a completely gutted 30-foot camper trailer, can be moved with their one farm tractor (a Kubota L48). “The eggs are labor intensive, but they’re extremely high quality and people get hooked. The eggs help to introduce customers to our other products,” said Nick.

Rather than having one large barn, Nick designed a universal shelter that the sheep, goats and pigs utilize. “They’re four-foot-high wooden structures with a seven-by-seven-foot footprint. The end walls are half-capped for wind and weather protection,” Nick said. With a pallet built into the top, they are designed to be picked up with the tractor forks.

Danielle added, “The goats use them the most. The pigs rarely use them, and the sheep usually only if it’s freezing rain.”

With a recent grant from the Food Animal Concerns Trust, Nick and Danielle set up an animal handling system. Each time the livestock pass through the center area of the farm, they run them through the handling system. This includes weighing, hoof trimming, body condition scoring, FAMACHA scoring and fecal eggs counts (if needed). They also use the system for sorting out animals for weaning or sorting for slaughter.

Danielle and Nick direct market about 90% of their meat products at three farmers markets. Customers can also order from the BOTL Farm website for an on-farm pickup. One of their long-term goals is to shift some of their farmers markets sales to on-farm sales. “There’s no extra time on market days,” Nick said. “Our plan is to always have enough product left at the end of the farmers market season to encourage people to come to the farm stand.”

It’s also their goal to utilize as much of the animals as possible. Their slaughterhouse, located in Westport, MA, provides all the standard cuts and makes their sausage, but Danielle and Nick take all the extras home – bones, heads, organs and fat. At a nearby commercial kitchen, they produce bone broth and render lard. When they found that three-pound packages of frozen pig testicles didn’t sell well at market, they sliced them up and made dog jerky. Recently, they’ve been experimenting with creating a marketable lard biscuit.

“There are ways to sell this stuff,” the pair said. “You just have to figure it out. We grew these animals for their flavor, and we think we should be utilizing the whole animal, one way or another.”