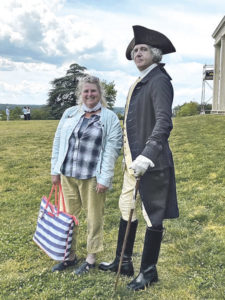 Jody Jess is a champion of heritage breeds. She has raised Kerry and Dexter cattle, heritage breeds that have a strongly documented Irish lineage, for 13 years. She is the secretary and registrar of the board of directors of the American Kerry Cattle Association (AKCA). She currently raises 22 Kerry cows and heifers at her Buckhill Homestead Farm in Westminster, MA, and eight Dexters, with one Dexter steer being raised for beef. She sells pork from her Gloucester Old Spots and honey from her eight hives.

Because she runs a preservation farm, working to trace the bloodlines and genetics to preserve the breeds, as well as testing for diseases, “I do a lot of genetic testing at UC-Davis, to verify the genetics, mailing tail hairs. I’m always at the post office mailing samples, second day air,” said Jess.

In 2014, she was waiting in line at the Ashburnham post office to mail a sample when a USPS employee, John Riach, who she had gotten to know very well, was hanging up a poster of a new stamp. She asked, “Who designs the stamps?” Riach replied it was citizens just like her.

The subject matter had to be something to do with the U.S., so it couldn’t be Kerry cows, because of their Irish lineage. She immediately considered suggesting other heritage breeds, many of which are promoted by the Livestock Conservancy. Riach provided her with the USPS website to apply.

The challenge was writing the submission in such a way that did not promote the breeds, but still highlighted their importance. Among her suggestions were a rabbit, a chicken and ducks, something people identify easily. In 2015, she received word that her suggestion was accepted to be considered to be a stamp. “I was ecstatic. Not everyone who sends a suggestion gets chosen.”

In 2019, the Livestock Conservancy called Jess to inform her that the USDA had contacted them about the 10 breeds the USPS decided to place on the stamps. Then COVID hit. Finally, in 2021, Jess received a formal invitation from the USPS to attend the First Day of Issue Dedication Ceremony to celebrate the USPS’s Heritage Breeds Commemorative Forever Stamps, held in Mount Vernon, VA, in May.

“I was surprised to hear the USPS considered the Heritage Breeds stamp to be a historical stamp during the unveiling, because it had a historical connection to George Washington and his livestock, which I didn’t even know when I sent in the suggestion,” said Jess.

George Washington is credited with starting the donkey breed from large donkeys imported from Europe in the late 1780s. Washington, Henry Clay and others had obtained jennies and jacks from overseas with an eye to producing a strong working mule. Washington offered stud services from his large jacks in 1788. American farmers bred their work horses, such as Percherons, to Washington’s donkeys and other donkeys that were large enough to breed with draft animals.

Of her suggestion being chosen, Jess said, “Knowing my breed would not be chosen wasn’t important. What is important is for everyone to see we do have heritage breeds; it wasn’t about the 10 breeds on the stamps, but all heritage breeds in the U.S. I did it for all the breeders. I know what hard work all these breeders do because I do it too. People don’t realize how much work it is.”

Jess is committed to teaching people about heritage breeds, as well as the value of genetic documentation which she puts into practice by rescuing Kerrys and Dexters and other heritage breed animals to save their genetic heritage before they are crossbred. “You cannot get the genetics back once you crossbreed them, as you are losing half your genetics in every breeding. You are doing preservation – that’s why you test so much.”

She routinely tests her animals for Johne’s disease, bovine tuberculosis, bovine leukosis and brucellosis. “You want healthy animals. If you don’t breed healthy animals, all you’re doing is spreading disease around,” she stated.

Meanwhile, she is setting up a portable dairy with a 16-gallon bulk tank and a processor to take around to teach people about dairies and milking cows. She is also establishing the Little Black Dairy LLC. She greatly enjoyed her day at Mount Vernon and plans to go back again when she finds more time.