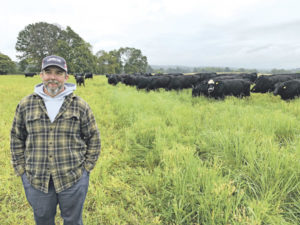 Graziers throughout the Mid-Atlantic are familiar with the summer slump that comes with managing pastures dominated by cool season grasses. The slump presents itself not only as a drop in forage production but also, in fields dominated by endophyte-infected fescue, as fescue toxicosis, which affects the physiology and production of cattle.

Luckily, grazing experts have been studying the issue and have determined that perennial stands of native warm season grasses can provide an alternative forage for cattle in the summer while also providing wildlife habitat and other benefits.

In fact, the NRCS is now using its Working Lands for Wildlife (WLFW) program to promote the establishment of native warm season grasses for forage producers both to provide a warm season forage base and to provide habitat for the northern bobwhite quail.

This program developed out of research done by Pat Keyser, director of the University of Tennessee’s Center for Native Grasslands. In Virginia, State NRCS Forage & Grassland Agronomist J.B. Daniel – together with the help of producers and conservation professionals throughout a number of local, state and federal agencies – has adopted and promoted Keyser’s research to encourage producers to use financial support designed to support the conservation initiative of building habitat for the bobwhite quail to also provide better warm season forage options for cattle producers.

Both Keyser and Daniel joined a recent webinar to discuss the history of their research and the ongoing implementation of that research into real-world policy to support farmers to establish stands of native warm seasons grasses (NWSG). Virginia cattleman Keith Tuck also joined the presentation to discuss his experience with establishing 40 acres of NWSG over two years.

For example, a drought can severely impact the success of a stand of summer annuals. But an established stand of NWSG likely will fare better under similar conditions if properly managed.

As part of his research, Keyser tested a number of NWSGs at four Tennessee locations: switchgrass, Eastern gamagrass and a big bluestem-Indiangrass blend.

Some of the lessons learned in the three-year study were practical. “Switchgrass is a fast-growing, robust grass,” Keyser said. “We managed it better in year three than in year one, when it got too stemmy.” What’s more, because NWSGs are driven by day length, their growth inflection point corresponds closely with the solstice (this is especially true of switchgrass).

In terms of production, cattle in Keyser’s study managed an average daily gain of 1.74 pounds on switchgrass, 1.06 pounds on Eastern gamagrass and 2.11 pounds on the big bluestem-Indiangrass blend.

Keyser also tested interseeding red clover in NSWG but found that its impact was minimal (as clover was primarily available in May and June when the cattle were already achieving their maximum daily gain).

He also doesn’t advise interseeding into established cool season grass stands, as you likely won’t have good establishment success. “In the eastern U.S., most of us suffer from lack of summer forage,” he said. “We need warm seasons grasses. Commit the field to being a warm season grass pasture.”

Over the years, Keyser has undertaken other research projects as well. One lesson is common throughout – sites with better management lead to better performance in the animal herd.

When it comes to using NWSGs in the Mid-Atlantic, historically conservationists have promoted them to producers for use in field edges, as buffers, along streams or on marginal areas – not part of a farm’s productive farmland (although some producers had on their own tinkered with using NWSG as forage).

“We were told native warm season grasses were only good for wildlife,” Daniel said. “We were told it took three to five years to be established.” But when research showed NWSGs could be established within one year in many cases and that livestock grazing was not destructive to native ground birds, the national NRCS asked Virginia to became a pilot state for using the WLFW to develop a program of establishing and managing NWSGs on producive pasture land.

In about 80% of cases, NWSGs can be established in one year, and Daniel and others in Virginia are currently studying which cultivars of various NWSGs work best for hybrid production-habitat purposes.

Tuck, a cattle producer from near Virginia’s Smith Mountain Lake, planted 16 acres of the “Carthage” variety of switchgrass in March 2019, after spraying down the preexisting sod the previous autumn.

“We tend to have a lot of dry summers,” Tuck said. “The summer slump is real for us. We tried summer annuals first, but we got tired of the renting the drill, tired of taking the time to plant it every year.”

Tuck planted his switchgrass seed on March 30, 2019. The first three weeks he didn’t see many sign of establishment. He deliberately stayed away for two weeks. After five weeks, the grass was coming up. “It was looking good,” he said. “I breathed a sigh of relief.”

As the season progressed, foxttail and crabgrass also emerged with the swtichgrass, so mid-summer, after consulting with Daniel, he clipped the field as high as he could. That December, too, he grazed the dormant stand. “It helped my hay reserves,” Tuck said of the grazing. “We were in a severe drought.”

This past year, Tuck put his cattle on the switchgrass for a first grazing in June, moving the forward fenceline when the stand was 12 to 15 inches. No back fencing was needed because the cattle kept moving forward. He grazed it a second time in July and a third time in September.

“It gave my pastures a break,” Tuck said. “We got some good regrowth.”

Last spring, Tuck planted another 27 acres of NWSG, a mix of big bluestem, little bluestem and Indiangrass. After planting he applied a mixture of glyphosate and five ounces of Plateau® per acre to kill winter weeds and provide early season weed and grass suppression. By summer, foxtail, crab grass and Johnson grass were emerging, so – as he did with the switchgrass stand – he clipped the new stand to 15 inches in early August.

“A month later, it looked terrific,” Tuck said. “It’s a very nice stand. I’m shocked at how nice it looks. This summer we’ll have 40 acres of native warm season grasses. We do fall calving and wean in May and sell calves mid- to late-July, so these grasses will help me get through the summer slump with the calves. They should get good gains post-weaning. The rest we’ll use for cows to graze. I’m looking forward to the upcoming summer.”

For more information about how you can incorporate NWSGs into your operation, check with your local NRCS agent and/or Extension agent.