Up to the sixth generation at Shaw Farm 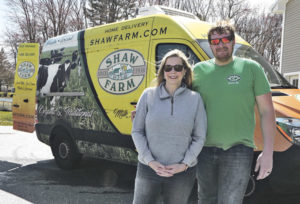 Shaw Farm has been producing milk for 113 years. Fourth-generation farmer Warren Shaw and his two Holstein milking herds, one conventional and one certified organic, produce 5,000 pounds of milk a day that is either bottled in their milking plant, made into ice cream (over 75 flavors), home delivered to 350 families or delivered to local stores and other farm stands.

“My great-grandfather (Mark Shaw) bought the first pieces of land and started the commercial piece of the farm with a small herd of cows in 1908. They immediately started producing; they didn’t ship the milk out,” Warren said. He has carried on that tradition at the farm in Dracut, MA.

Warren grew up on the farm with his sisters Susan, Linda and Ruth, and his parents, Nancy and Warren Shaw. His mother still lives nearby.

“I’ve been here most of my life, so I have taken the farm from an old family dairy to an updated, 113-year-old business that more closely resembles a startup. The challenge in this business and the piece that attracts me the most is the drive to succeed,” Warren said.

His son, Mark Shaw, the fifth generation, lives on the farm and is now part owner, in charge of agricultural operations. His daughter, Lyndie (Shaw) Zolkos, oversees home delivery and wholesale accounts. His daughter Sarah (Shaw) Pratt oversees accounting, while her husband Robert Pratt is their wholesale driver. His grandson, the sixth generation, Matthew Zolkos, works in ice cream manufacturing, with other daily operational responsibilities. They have 10 full-time employees and 20 part-time employees, some seasonal.

Third generation herd manager Wally Beidron resides on the farm with his wife Peggy. He has lived on the farm since he was eight years old, as he is the son of former farm manager, Walter Beidron Sr., who retired after working more than 50 years. Beidron is responsible for breeding cows for the highest and best quality milk output.

They grow certified organic grass for silage on their own 150 acres. They rent more acres to grow high quality corn for corn silage to feed their conventional milking herd of 70 milking cows.

In 2007, they started a product line of certified organic milk, raising an organic herd to answer customers’ demand, that now consists of 20 cows, making it a total of 90 milkers altogether. The organic herd is fed only organic grass – no corn. Both herds receive organic grass silage. The cows are housed in the same barn. “The organic cows have to go out every day, while the conventional cows stay in. The organic cows are milked first. Their milk is processed first, in the same bottling plant as the conventional cows,” said Shaw. The conventional herd is milked afterward.

The farm’s existing processing and bottling plant was upgraded in 2009. It now consists of a 3,000-square-foot space, next to their 6,500-square-foot farm store, all enclosed in one building. Bottling plant manager Jim Sheridan started working part-time at the farm at age 12, mentored by Walter Beidron Sr. Shaw Farm’s milk carries the Shaw Farm Dairy label.

As part of their commitment to going green, the farm store has geothermal heating and air conditioning. Their three-year-old, 400-kw ground-mounted solar array “contributes revenue as well as providing cost avoidance as we use much of the power ‘behind the meter,’” said Warren.

About 70% of their manure supply contributes to the electrical energy output of Vanguard Renewables waste-to-energy anaerobic digester at Crescent Farm in Haverhill, MA. Unfortunately, while the digester produces liquid fertilizer as a byproduct, other food wastes are incorporated within it. Therefore, Shaw Farm cannot use it on their fields, as it’s not an organic product.

Other improvements include a new barn in 2003, and additional farmland acquisitions.

While Shaw Farm made and sold quarts of ice cream, they started an ice cream stand in 1999, where they serve more than 75 flavors, which makes it a lovely destination for a Sunday drive. For more information, visit shawfarm.com.