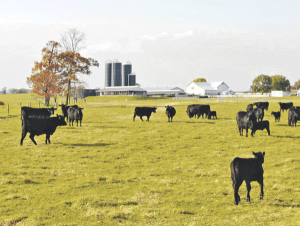 EPDs are a great tool for cattle breeders, but there’s more to developing a breeding system than looking at numbers.

For years, beef cattle breeders have taken advantage of crossbreeding and the resulting hybrid vigor to develop good cowherds. Dr. Megan Rolf, assistant professor of genetics at Kansas State University, said the benefits of crossbreeding can be summarized by two main categories: heterosis and breed complementarity.

Heterosis is the advantages in production seen over the average performance expected from two purebred lines, while breed complementarity matches the core traits of two breeds to complement strengths and weaknesses of each other.

A more familiar term for heterosis is hybrid vigor, described as the superiority of a crossbred animal as compared to the average of its straightbred parents. So with purebred parents A and B, the performance of the A x B cross is slightly better than expected from an A x A cross or B x B cross.

“The more different the parental breeds are in terms of ancestry, the more heterosis you would expect to get from that mating,” said Rolf. “Heterosis is also influenced by heritability of traits.”

Heterosis results when alleles from two different breeds are paired in offspring. Using a common cross, Rolf illustrates her point: “An Angus bull has four pairs of Angus chromosomes,” she said. “The female is a Simmental, and has four pairs of Simmental chromosomes. If we make that mating and look at the F1 progeny, the Sim-Angus calf has one set of chromosomes from the Angus bull and one set from the Simmental cow.” So at every location in the genome where Angus alleles are present, Simmental alleles are also present.

Breaking it down further, Rolf explained backcrossing, which in this example involves using an Angus bull to breed F1 females. The progeny will be a first generation backcross. Some locations in the genome will have Angus alleles with Angus alleles, so some heterosis is lost in those portions of the genome, but heterosis remains in about 50% of the genes.

“The mating of crossbred animals does result in the retention of some heterosis,” said Rolf. “This is related to the probability of alleles from those different breeds pairing together. The alleles don’t just disappear after that first generation of crossbreds.” Rolf added that the level of heterosis expected versus how much is actually realized may be different due to the relationship of different breeds.

“In some cases, the heterosis estimates compared to the benchmark data from the 1990s or early 2000s has actually gotten a little bigger,” said Weaber. “What we expect is an additional pound to a pound and one-half of additional birth weight due to heterosis.” Weaning and yearling weights are substantially higher.

Weaber said extensive research shows that heterosis is not available from within breed matings. “Dr. Larry Kuehn of the Meat Animal Research Center (MARC) did some interesting work looking at ‘estimating the genetic distances between breeds based on 50K genomic data’ through the 2,000 Bull Project,” said Weaber. “The project created an extendagram that looks at the relationships between breeds. In some cases, there is ‘clustering’ of breeds of similar type.”

The traditional Continental European breeds including Saler, Limousin, Charolais, Braunvieh, Simmental and Gelbvieh comprise a branch. Angus, Red Angus and Chiangus comprise a branch referred to as Angus. Another branch is for Herefords, and includes an inbred population. Maine-Anjou and Shorthorn, which have had an appendix registry, comprise a branch. Another branch includes Brahman and other American breeds such as Brangus, Beefmaster and Santa Gertrudis – all blends of British and Continental breeds. The branching and length of the branch represent the level of genetic difference between various breed groups. “Herefords, particularly Line 1 Herefords, are very different from Maine-Anjou,” said Weaber. “Brahman are the most different – we know that Brahman and the Bos taurus breeds separated about 10,000 or 11,000 years ago and are very genetically different.”

Weaber’s point is that cattle breeds are a relatively recent divergence in the cattle world. While breeds such as Angus and Red Angus are different in terms of genomics, they are not different enough to generate heterosis. In other words, there is no substantial variation in the chromosomal material or genetics of those individuals.

Referring again to MARC data, Weaber said there is useful summary information through the germplasm studies regarding strengths of various breeds across a wide range of traits. “Included is a discussion about end-product and carcass merit traits, traits we would typically call moderate to highly heritable,” he said. “Heritability is between 0.3 and 0.5 typically, meaning that somewhere between 30% and 50% of the variation we observe between individuals is under genetic control, so we have lots of opportunity to make improvement through selection tools. But we see across those breeds substantial differences in a variety of carcass merit traits, particularly yield grades – how much trimmable fat there is in relation to lean muscle tissue in carcasses.”

The other main aspect of carcass evaluation is intramuscular fat, or marbling, that affects quality grade. The percent choice and prime is most often used as a summary measure of those animals’ performance in the more valuable quality grades. Weaber noted that yield grades 4 and 5 are discounted when they exceed plant average.

“Very low marbling animals are discounted as well,” said Weaber. “There are substantial differences between the British breeds and the Continental breeds for these two sets of traits. In general, the British breeds tend to have a little more carcass fat, subcutaneous fat and intramuscular fat so they grade a little better in terms of percent choice and prime, but there are more yield grade problems as those cattle finish the feeding period.”

Part 2 will discuss breed complementarity and how it applies in crossbreeding programs.