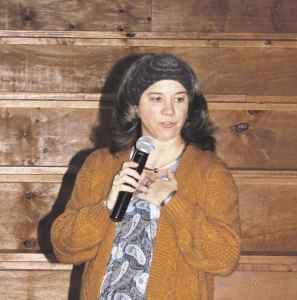 WATERLOO, NY — Has bindweed affected your farm? Dr. Lynn M. Sosnoskie recently spoke on “The Biology, Ecology and Management of Bindweed” at the New York Certified Organic meeting hosted by the Martin Auction Barn. Sosnoskie is an assistant professor of weed ecology and weed management for specialty crop systems with the Cornell University School of Integrative Plant Science at Cornell AgriTech, Geneva, NY.

Though now working with IPM, Sosnoskie had previously worked and researched in California with completely conventional growing systems. She believes that the difficulty of conventional systems experience with chemically managing bindweed only underscores the necessity for researching multiple means of suppressing bindweed.

In California, bindweed presents a significant issue and similar varieties grow in most other regions of the U.S. as well.

Suppressing it “is more important than previously thought,” Sosnoskie said.

Farmers there have found that using shallow tillage has helped with weed control as has moving to drip irrigation, as surface soil wetting reduces annual weed seed germination and seedling establishment.

“The number of weed seeds when switching to drip irrigation is down,” Sosnoskie said.

In California, farmers may not receive much rain from April to December, but bindweed still flowers.

“We have to disrupt the root system,” Sosnoskie said.

She has seen regrowth of bindweed even after application of herbicides like Round-Up in late summer.

“We had to use a chisel plow 15 inches deep to sever the deep roots from surface roots and disk,” she said.

In the East, the black bindweed (Fallopia convolvulus) variety is prevalent. The annual is also called “wild buckwheat.” While not as problematic as a perennial, it still challenges farmers to eradicate it. There’s also the similar-looking hedge bindweed (Calystegia sepium) and field bindweed (Convolvulus arvensis).

Part of what makes the bindweed family so hard to get rid of is that the seeds can stay dormant in the soil for years — even decades, according to Sosnoskie. That persistence makes it hard for research to offer many solutions for bindweed since most studies don’t last that long.

“A lot of study duration is short, 30 to 90 days after emergence,” Sosnoskie said.

They also grow deep roots with underground roots that spread throughout a field. Just cutting off the top doesn’t work. The weed can store reserves in its roots that permit it to re-grow months later, even after a crop has long since been harvested at the surface level.

Sosnoskie said it appears that infrequent soil disturbance can make bindweed worse, as fragments of the established root systems can be redistributed to other fields on equipment once the soil is disturbed. The timing of soil disturbance may make a difference, as some studies show the greatest sprouting capacity occurs from May through August. Early planting, if possible, can help prevent the spread of bindweed fragments that have a large number of buds on them.

Some orchards address the issue by grazing livestock on the bindweed, since food safety wasn’t a concern because of the location of the produce in trees. But Sosnoskie said horses are sensitive to bindweed.

“My thoughts are to start clean and stay clean,” she said. “It will be difficult to control in conventional crops and more so in organic crops. A lot of the work done on this hasn’t been done on populations in the Mid-Atlantic states.”

She added that making sure equipment isn’t spreading bindweed is also key for halting its spread on a farm.