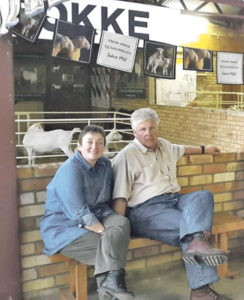 Some farmers are experimenters – they start with raw materials and an idea and test a method. If their hypothesis works, success! If it doesn’t, they tweak the formula and try again.

Other farmers prefer to follow a tried-and-true template to help them achieve their goals. Offering a template for sheep farmers are Karin and Manie Wessels of Mamre Consulting, based in Frankfort, Free State, South Africa. They recently shared the formula to their success via webinar presented by the Maryland Extension Small Ruminant Program.

While the Wessels’ farm is located about 100 miles from Johannesburg, the lessons they’ve learned and shared over the years can be useful to anyone raising sheep. They started with 26 ewes about 12 years ago, building the business along the way. In order to achieve their goals, they developed an intensive breeding system using project management principles.

“What we do is lamb every month, basically because of the need for cash flow,” Manie explained. “Farming with cattle, you will get income once or twice a year. With our intensive lambing system, we get income every month, slaughtering and selling every month … because sheep cost money every month.”

He added that if you lamb only twice a year, you fall into a system where everyone sells lambs at the same time. Because they sell every month, they can negotiate a premium – they’re providing a quality type of lamb consistently. The Wesselses require their ewes to produce five lambs in a two-year period for their system to work. And they need to manage this system very carefully, with very detailed recordkeeping.

“Starting with this system, it was chaotic,” Manie said. “It seems like it is impossible to manage, but we created a project plan, and now we run eight of these plans simultaneously.” It’s an Excel-based system, based on the physiological stages of ewes. The spreadsheet covers activities and dates – certain things you have do at specific times.

The farmer’s budget needs to be developed before the synchronization of the ewes begins. If there isn’t enough money to support the start of the system, Manie suggested farmers don’t start the process, because once it’s started it can’t be stopped.

“This is a simple solution to a very complex management problem,” he said. “We synchronize some of the ewes every month. We mate, lamb, wean and slaughter every month. We’re getting income every month. With this plan, we have increased productivity and positive cash flow with a project approach.”

“It’s such an easy way of managing your sheep. It’s like baking a cake – if you stick to the recipe, the cake will taste the same, even if the icing is different,” Karin added. “With this plan, there’s never a time you won’t know what you should be doing.”

How the Mamre System Works

First, each ewe must be marked and numbered. Electronic ear tags are helpful in this system. The project actually begins four weeks before the synchronization process. The weaning of lambs must be complete, the ewes must stop producing milk and they must be fed to a healthy weight so they can be put to the rams (with an ideal condition score of 3.5 or higher). Important inoculations must be done at this point, as well as general health checks.

Preparing the rams is also critical. As the rams play an important role in this system, they should be tested yearly for diseases and fertility. Their feet, testes, teeth and body condition score must be checked before they’re put to the ewes. “This doesn’t need to be done every month – every six or eight months may be enough,” Karin said. “It’s disastrous to the system if your rams are not fertile, though; they need to be fit and with 2.5 to 3 body condition score.”

Before you start the synchronization of the ewes, make sure their lambing date will suit your schedule. If you know you’ll have to travel for a wedding, for example, wait a week or two to begin. To synchronize, use CIDRs (inserts that contain the hormone progesterone to induce estrus). After the appropriate amount of time, remove the CIDRs. It’s at this point the Wesselses inject the group of ewes with PMSG (pregnant mare serum gonadotropin) to further stack the deck in favor of pregnancy. The rams are put with the ewes 36 hours after PMSG injection. Karin said keeping the ratio of one ram to five ewes is key. The rams will stay with the ewes for 36 hours to ensure they all lamb within the same five to seven days.

“With this system, it’s easy to do laparoscopy, AI or embryo implanting, especially if you have a very good ram,” Karin said. “The same is true of flushing with a good ewe.”

After a few weeks, it’s important to ultrasound scan the ewes. It helps to identify sub-fertile ewes as quickly as possible, and it helps with the identification of twins and triplets. Karin noted that since not every ewe will fit in this system, scanning assists in identifying problems more quickly.

Like every other step in this system, preparation for lambing is critical too. Six weeks before a group’s lambing date, the ewes are separated from the herd and put in a small “camp” to start the feeding program for lambing. They need a calm, quieter place for ideal fetus and udder development.

With synchronization, the lambing period of the group lasts about a week. The Wesselses have their ewes lamb in lambing pens with pine shavings that help with fluid absorption and fly control. “I was previously a midwife, so I really enjoy the lambing period,” Karin said. They vaccinate the lambs after they receive their colostrum. The ewes stay in the lambing pens for eight to 10 days; the ewes with single lambs are taken out first. Those with twins are taken out two at a time once they’re settled. The ewes with triplets or quadruplets stay together in a small camp away from the other sheep for a longer period of time. Lambs are introduced to creep feed as soon as possible and are weaned at eight weeks. After that, the ewes go back to the beginning of the project plan for their next synchronization date.

“Some people argue ‘but the ewe must rest.’ What part of the ewe needs rest? You have to keep a muscle in exercise, and a uterus is just another muscle,” Karin said. “Using this system, they eat very good food and never have to struggle. Our ewes get to 10 to 12 years old and still produce twins every eight months. If you treat them well, they will treat you well.”

Karin said this is ultimately a really easy program to follow. It’s easy to operate and written according to the Mamre Project Plan. All dates and activities are programmed among the groups of sheep. It also makes budgeting and cash flow issues easier to manage.

Manie and Karin farm mostly Dormer ewes, but they believe this system would work for most types of sheep, but especially smaller breeds. Those willing to learn more about this intensive system of lambing are invited to visit their website, mamreconsult.com.