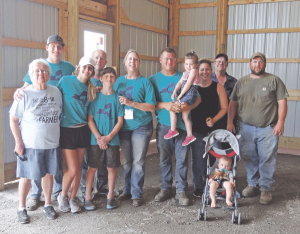 “This is our 40th anniversary here,” Brian True stated. “I was a senior in high school when we moved here. We had 50 cows and just a couple hundred acres.”

True Farms became established in Perry, NY after moving their Holstein herd from Spencerport, NY, in 1979.

Brothers Jeff, Brian and Glen True formed the original partnership. “Jeff’s father Blair and his mother Ruth wanted to grow the business so their sons could be involved. So, they bought the farm that we’re in now,” explained Stacia True, Jeff’s wife.

Brian and his adult sons, Chris and Brad, work on the farm with Stacia and Jeff, while Ruth is still at the helm.

True’s Holstein dairy herd and farm grew over the years, and Stacia said the Brown Swiss herd has also been growing since she became part of the family.

“When I married Jeff in 1997, we had two Brown Swiss on the farm — Peggy and Penny. They were twins. They were always together. I really liked the Brown Swiss and so did Jeff.”

“As a matter of fact, for my 30th birthday, that is what he bought me — a Brown Swiss calf,” Stacia smiled.

In 2010, Jeff went into partnership with ‘Larry Hill’ and brought 35-head home to the True Farm. Resultant cattle are noted with the ‘One True Hill’ prefix.

Jeff holds the position of District 1 Director for the National Brown Swiss Association.

Stacia said the farm herd now consists of approximately 1,100 head, “with 150 Brown Swiss, about 30 Jerseys, and the rest Holsteins.”

“Our Brown Swiss all live in one pen, because we feed them a higher protein TMR,” she explained.

Stacia said Brown Swiss have higher components and complement the Holsteins in the milk tank.

“We’ve been slowly increasing the Brown Swiss over the years because of the increased butterfat and protein,” he commented. “That’s what the milk companies are paying for — components.”

In 2013, True Farms was one of only six national recipients to earn a Platinum Award from the National Dairy Quality Awards, based on milk quality.

Stacia said besides boosting components, there are additional benefits to incorporating Brown Swiss in the herd.

Besides the added-value, True reported the Brown Swiss tolerate heat extremely well and have an excellent disposition.

“They don’t get as stressed out during the summer as the Holsteins do — and we really like their personality,” she said.

In fact, Trues believe the Brown Swiss personality influences the Holsteins, and although one pen is exclusively Brown Swiss, most other pens have a few Brown Swiss sprinkled in.

“We feel like the Brown Swiss bring a calmness to the pens,” said Stacia.

True Farms has two locations, with one being within three miles of the other.

Breeding is done A.I., with live cover occasionally used for a hard breeder.

The farms use a Double-11 Herringbone parlor and a double-10 parallel. They milk 3XD.

All calves are kept in individual pens for the first three days of life, then transitioned into groups of 20 and group housing.

Chris said the feeders have proven to be efficient, tracking and providing documentation of each calf by scanning RFD tags and cutting back on labor.

“DeLaval is probably our biggest local supplier,” said Chris. “And they take care of all of the parlor maintenance.”

The Perry Veterinarian Clinic connected True Farms with a pharmaceutical company, who set them up with SMARTBOW® from Zoetis.

Chris said they are using these “on trial.” Calves wear ear tags that are tracked for activity. 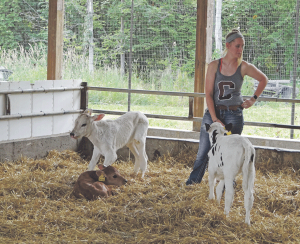 “We’ve been trying to hash all of the good and the bad out. We’re getting some decent information off of them now.”

The farm employs approximately 50 people, and Chris said labor has been a big issue in the past.

“We’ve got a pretty good crew now. We’ve had a lot of turnover in the past. The ones that are here have a lot of respect for each other. Our herdsman has been here 16 years. He’s our main guy.”

Chris said the new Farm Labor Bill will have a huge impact on agriculture in New York State.

“I think it was a down-state decision and I think there’s going to be serious consequences that come out of it.”

Brian said weather has presented challenges this year. “We finished planting on June 12 of June 2018, but not until the 2nd of July this year.”

Brad reported black-stem this year in the spring alfalfa.

The farm is cropping nearly 1,500 acres of owned and rented land.

“We plant corn silage and alfalfa,” said Chris. “We put about 300 acres of BMR corn silage in this year, about 800 acres in corn and 400 in hay. And, we do some double-cropping with triticale.”

“Cover crops have been very good,” reported Chris. “We use wheat and rye on about 400-500 acres with cover crops.”

Brian said although cost of everything is always an obstacle, a fire in October of 2018 that burned down the shop, caused a great loss.

“She burned right to the ground,” Brian recalls. “We lost all tools and everything in the shop.”

Brad reports a loss of all documents and records for planting were part of that loss.

“We planted with no operator’s manual,” said Brad. “Our service and parts manuals were also burned. All fertilizer settings for our planter burned up. All of our field data on GPS burned up. Our primary tillage tractor …”

“It’s been a terrible battle,” interjected Brian. “You just have to stick with it and ride out the storm.”

“We’ve had some Brown Swiss do very well on the national level,” commented Stacia. “And we’ve enjoyed that. It’s been a lot of fun.”