Tree farm transitions to next generation 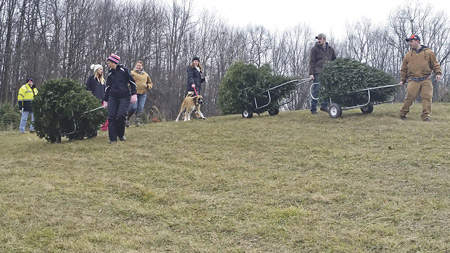 Timing is everything. Cathy and Robert Brown began their Three B Tree Farm in Norfolk, NY in the 1980s with the idea that they could use the profits to help their children through college.

“We were very green at it; we didn’t realize at the time how long it took to grow them,” Cathy Brown admitted. “By the time they were big enough to cut and sell in 1990 they were all done with college!”

But the farm has come full circle and in is the midst of transitioning the farm operation to the couple’s son, Scott, as the elder Browns are in their 70s and craving their second retirement —Cathy from nursing and Robert from Alcoa. After their first retirement, they bought their second tree farm in Jordan, NY, which has 20 acres planted to trees. The Norfolk location has about 15 acres.

When recalling the mistakes they made when new to the business, Cathy advises anyone beginning in tree farming to join an organization. They’re members with the Christmas Tree Farmers Association of New York.

“They can give you the right background and tell you all the things we didn’t know,” Brown said. “It won’t take you quite so long to grow the trees. We learned from a lot of mistakes and a lot of the older tree farmers also say the same thing.”

The family carefully monitors how many trees they cut to ensure sufficient replacement and ecological stewardship. Usually, the season lasts five weeks; however, Brown said that this year, they closed down after three so as to not over cut. 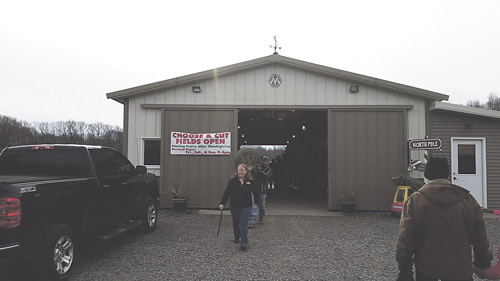 “We have found there are a lot of new generation people coming in,” Brown said. “They’re going back to tradition and want real trees.”

Usually, any cut trees are given away to needy or military families about a week before Christmas and the normal end of the Christmas tree season. Any further leftovers and trimmings are composted to use on the farm.

The farm participates in Trees for Troops, a program of the Christmas SPIRIT Foundation. The program has facilitated the donation of 17,400 Christmas trees nationwide to 70 military bases and 250 to international bases through farm and patron sponsorship. Of those, more than 650 were delivered to Fort Drum in New York, where Trees for Troops presented its 200,000th tree to a family in Fort Drum.

Three B Tree Farm also supports Dollars for Scholars with local third grade children at Jordan Elbridge Elementary. Each year, the third grade class comes to the farm for an educational program and an opportunity to help plant trees.

This is the first year that child-planted trees are large enough to sell. All the profit from those sales goes into a scholarship matching funds program for students going into agriculture or nursing. Usually, the children plant between 90 and 120 trees but Brown said the farm contributes the same amount each year regardless.

The family plans to expand the farm with a gift shop to make it a little more of a destination, “but we don’t have the land to do a whole lot,” Brown said.