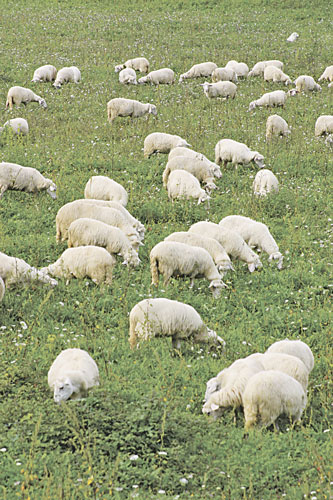 Regenerative grazing means purposely using the action of grazing animals, combined with the power of forages, to promote pasture health. It increases soil organic matter, enhances the diversity of soil microbes, increases the soil’s ability to sequester carbon and its ability to retain moisture. By using small paddocks, frequent rotations, grazing tall and leaving much of the plant trampled on top of the soil, regenerative grazing nourishes animals, soil and plants.

Tall grazing allows the grasses a long growth period, enabling beneficial root exudates to enhance the soil microbiome. Combined with increased stocking rate, so the residue left from the trampling of the biomass in the paddock rapidly decomposes, it increases soil organic carbon levels.

“It basically feeds them. They are now waiting for you, cycling nutrients,” Scott said of the microbes. “There are plenty of nutrients in your soil. You just have to make them plant-available.” And with regenerative grazing practices, “agro-ecosystems are improved, resulting in increased pasture production.”

Scott was previously grazing sheep utilizing intensive rotational grazing management, using temporary fencing to create 42 paddocks across 32 acres of pasture. Each day, the animals were moved into a new paddock.

The biggest expense on the farm was fertilizer costs, which were $120/acre/year. Irrigation costs, and the need to irrigate the land for pasture production, were also a concern. He routinely applied 160 units of nitrogen each season, across four applications. Irrigation was done at the rate of one-quarter inch per week via a sprinkler system.

Seeking alternatives to these overhead expenses, he became aware of the work of Dr. Christine Jones, who promotes carbon-based agricultural systems. He was also introduced to the work of renowned grazer Gabe Brown, and decided to try regenerative grazing strategies. Scott described the decision to implement regenerative grazing as “a watershed event in the history of our farm.”

Once he opted to change the grazing management, he began by documenting his soil organic matter – already a decent 5 percent due to 30 years of intensive rotational grazing – and with the input of Jones, reduced the amount of applied nitrogen to 72 units/acre for the next two years. The third year, he reduced that amount to 35 units. Haney soil health tests were run every two years.

“The Haney tests basically tracked right with what we saw right on the ground during the whole transition. Our soil and mineralization was increasing,” he said. “We kept close track of the stocking rates we had, and also grass production.”

By keeping good records on the soils, the pasture production and the grazing pressures, Scott was able to see how changes in management equated to better pasture forage quality and density as well as soil health improvements.

The first year with no added nitrogen resulted in good lamb gains and no decrease in grass production. They now wait one more week for spring turnout, and by doing so can keep the animals on winter stockpile, grazing into mid-late January – instead of ending at Christmas – and also increasing the number of ewes grazing on stockpile.

They’ve been able to decrease the number of days on irrigation, even during a drought year, without seeing moisture stress. They have now decreased the irrigation from a seven- to a 10-day cycle, resulting in savings in energy as well as conserving water.

“We can feel the resilience that is building on our farm,” Scott said. “We have that nice trampled layer of grass that the sheep leave behind. That keeps the moisture in the soil and does good things for you. We do not have to totally depend on inputs all the time.”

His soil health using the Haney test has increased and is now 26, simply through regenerative grazing over the past few years.

“You can increase your soil organic matter much more than most people think,” he said.

While Scott is satisfied with the positive soil health gains as well as the decrease in inputs needed and the ability to graze more animals for a longer grazing season, there have been a few concerns.

The internal parasite loads have increased, particularly that of the barber pole worm. He hypothesized that the trampled grass may be providing a welcoming habitat for the worm with its moist, warm environment. His previous rotational grazing strategy was focused on eliminating the barber pole worm – and it was working – but now the worm is gaining a foothold.

He opted to seek a biological fix, and tried fenceline weaning. With this strategy, which entails keeping the lambs in a pasture adjacent to the mothers, lamb stress is reduced, making them less susceptible to illness. Since implementing fenceline weaning, the post-weaning FAMANCHA scores of the lambs, which indicate the presence of barber pole worms by scoring the color of the eyelids, has improved significantly. He only deworms the animals that score as being infected, and this number has decreased by about 50 percent with fenceline weaning, he said.

Regenerative grazing has enhanced the ecological health of the farm, as well as the economic viability, through increasing soil health and pasture production and decreasing the need for fertilizer and water. It has also allowed him more free time, with less time – as well as labor and money – spent on inputs.

“Attack your big costs on a farm and try to reduce them,” Scott said. “Most often, this means overhead expenses. Look to biological fixes instead of chemical or physical inputs. Take a look at the big picture. Copy what nature does.”