Transforming from corporations to cultivations 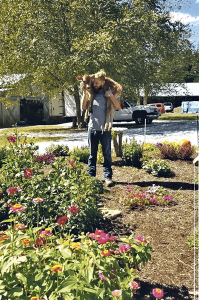 Cindy Hamrick used to fly so much she practically needed a cape. Working for years in corporate technology and engineering, she calculated she was averaging over 150,000 air miles a year. Yet despite the success she met in this field, Hamrick wasn’t satisfied; she found herself wanting something deeper, something more.

“I feel that people have a fundamental connectivity to the land,” she explained, “and when working with the land, you get a level of satisfaction and completeness that you just can’t get anywhere else. I really wanted to put in a hard day’s work and not have it feel hollow.”

A native of Indian Land, SC, Hamrick, along with her sons Brandon, Adam and Chase, founded Carolina Farmhouse Dairy Farm, located in Bahama, NC, in 2016. But her transformation from corporations to cultivations began years earlier.

Almost a decade prior to founding Carolina Farmhouse, the Hamrick family began growing fruits and vegetables at their home. “I never had any sort of formal farming training. I became what I like to call a ‘YouTube-farmer,’” Hamrick said. In addition to making the connection with the land she wanted, she was also strengthening her relationship with her sons. “I didn’t like the fact that my job kept me from seeing them as much as I wanted to. This was a way of addressing that and having us do something together.”

It soon became apparent to Hamrick that an outright career change was inevitable. “I sought out mentors everywhere,” she said. “I even worked full-time for two years at a local cheese farm, to better prepare myself for what we wanted to do next.” Next was a farmstead yogurt business, the very first in the Tar Heel State. Shying away from such monikers as “owner” and “general manager,” Hamrick readily describes her position at Carolina Farmhouse as “matriarch.”

Carolina Farmhouse Dairy spans 15 acres of pastures and woodlands. Her herd consists of 38 milking cows, but it’s growing fast. “We had 15 calves last year,” she said. The dairy maintains a staff of four to five workers in the creamery, and three employees for milking cows.

“You have to find a niche,” Hamrick said. There are plenty of dairies in the region producing milk, cheese and ice cream. But nobody else, she said, is churning out yogurt. Filling that niche in the market enabled her farm to grow faster than she imagined it could. In its first 21 months, Carolina Farmhouse Dairy jumped from two cows to 30. Just before the holidays in late 2017, the farm had doubled its original production.

In just three short years, the dairy has met with such success that it’s already evolving into a bigger and better version of itself. “We’re actually in the process of rebranding,” Hamrick stated. “We’re right in the middle of changing our name to ‘Carolina Culture Dairy.’ We really want to drive home our yogurt offerings.”

Those offerings include six flavors of traditional, unstrained, European-style yogurt, which are sold in pints or quarts. They also make four flavors of drinkable yogurt smoothies and five flavors of kefir, a cultured, fermented beverage that tastes a great deal like a yogurt drink. Because kefir is fermented, most people who are lactose intolerant can actually drink it.

Carolina Culture will soon be distributing its products throughout the Carolinas and southern Virginia. Carolina Culture works with Farmer Foodshare, a local co-op committed to creating markets for local farmers and delivering fresh, healthy food to hungry people in need.

Hamrick is proud to report “Our farm is Certified Animal Welfare Approved by A Greener World (AGW),” a non-profit organization dedicated to identifying and promoting agricultural systems that have a positive impact on the environment, society and animals. “Our cows are grass-fed and very well cared for,” Hamrick added. “That’s very important to us.”

As Carolina Culture’s product lines and distribution expand, so does its infrastructure. “We’re converting an old horse barn on the property,” said Hamrick. “I’ve already gutted it, and by the time it’s finished it’ll house our larger production facility. We’ll sure be needing it – our retailers keep telling us they want higher volumes of our products!”

Despite the long days, never-long-enough seasons and physically taxing labor, Hamrick loves her work and doesn’t doubt for a moment that she made the right choice in leaving the corporate world behind. “I might be more tired, but I’m so much more at peace. It’s a much more rewarding type of work,” she said.