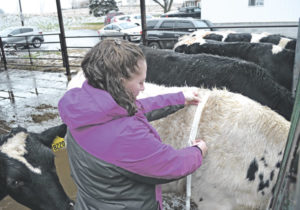 Now that heifers are no longer relegated to an old shed on the edge of the property and fed whatever the milking herd refuses, they’re performing up to their genetic potential starting with their first lactation. But managing heifers for optimum milk production still requires careful attention to growth throughout calfhood and through at least two lactations.

“We’ve done a lot of genetic selection since World War II and we’ve changed this cow a lot,” said Dr. Jud Heinrichs, Penn State dairy Extension and research. “We had to give the calf everything the cow made in order to keep the calf alive. She didn’t make a lot of milk in her lactation and was dry about eight months a year.” Classical work in the 1920s, ‘30s and ‘40s examining growth charts and growth curves set the stage for where we are today.

Heinrichs laid out some facts about heifer growth and maturity. “From birth to the day of puberty, calves grow at the fastest rate they ever will, in both height and weight,” he said. “From puberty, they grow slower. At some point, about 282 days post-conception, they calve. Maturity for a Holstein is about 54 months of age, so it’s third lactation plus before they’re fully mature.”

Early-stage calf growth is primarily muscle and bone, and the diet should reflect that. Once heifers reach puberty, which is determined by their first heat cycle, growth includes more fat deposition. This is also when heifers begin mammary development, which makes proper feeding even more critical.

There are four stages of mammary growth. The first is from birth to around post-weaning to three months; the second is the allometric growth phase, which in response to hormonal changes prior to puberty; the third is post-puberty; and the fourth is the final development that occurs between post-puberty and calving.

Heinrichs referenced a Michigan State University study on “The Biology of the Heifer.” “The mammary gland is growing a little faster, accruing more DNA than the heifer is,” he said. “After puberty, it’s about the same. But there’s a time period from about four months of age to puberty when the heifer’s mammary development is taking place about three and a half times faster than she’s growing.” This is the time during which the heifer is growing faster than she ever will in her lifetime, and there’s rapid mammary gland development. This growth ultimately impacts the future functionality of the mammary gland.

“From the day of puberty until prior to calving, the mammary gland will grow at a parallel rate with the heifer,” said Heinrichs. “Once puberty takes place, the sky is the limit as long as we watch body condition. Mammary development that takes place the last couple of months before calving is completely different.”

Beyond puberty, growth rate does not affect production as long as the heifer’s body condition score is around 3.3 to 3.5. Fat heifers will likely be a problem, but any issues are not the direct result of mammary development. Heinrichs said there’s an impact on milk yield in heifers that are beyond 3.5 condition score during first lactation milk production.

He noted there’s a study about every 30 years on how body weight at calving influences first lactation milk. The most recent study is from 1986, and the conclusion was to aim for about 85% to 90% of mature body weight to get maximum milk production in first lactation. Milk production in smaller Holsteins that weigh 950 to 1,000 pounds at calving will be compromised because they simply don’t have the capacity for sufficient dry matter intake.

Just prior to a heifer calving, the calf, membranes and fluids add up to about 9.9% of the heifer’s body weight. A pre-calving body weight of a heifer that meets the requirement is around 1,200 to 1,300 pounds, depending on the herd. All is achievable. “I don’t have to put them on a high-speed train to get this body weight,” said Heinrichs. “I can do it pretty easily.”

Tracking height and weight is critical. They provide a measure of whether heifers are growing at the appropriate rate. Heinrichs said most farmers don’t measure skeletal growth, but it’s important because heifers that are average or tall for their age have better first lactation milk yield while slower-growing, shorter animals lag.

Studies show that short calves have the lowest milk production, and those heifers are also more likely to be culled before the first lactation is complete. Higher calf growth rate means better odds of surviving the first lactation, so genetically superior, healthy first lactation animals will last longer in the herd and be more productive.

Heinrichs said heifers should be at 80% of mature height at breeding time and 95% of mature height at calving. However, he cautioned against pushing heifers too much prior to puberty. “Holsteins should not gain more than 1.8 pounds per day prior to puberty,” he said, adding that that takes her from birth to nine to 10 months of age. “The data are consistent – faster growing heifers before puberty always produce less milk than they should genetically produce.”

Holsteins continue to grow during their first lactation and into the second lactation, and reach mature size about halfway through the third lactation or into the fourth lactation (usually around 54 months).

Cassie Yost, Penn State Extension dairy educator, recommended weighing and measuring developing heifers regularly. If the farm doesn’t have scales, heifer weigh tapes are an inexpensive, easy to use alternative. “They can provide an estimate and a means to follow heifer weights as they grow,” said Yost. “There are tapes small enough for calves, and we can use them on heifers as they mature.”

Measuring height is also important, and can be done at the same time weight is recorded, preferably in a headlock for safety. For heifers being raised outside, a height stick or measuring tape can be mounted on a post, and when the animal walks past the post, record her height.

A customizable chart for monitoring heifer growth is downloadable at extension.psu.edu/customized-dairy-heifer-growth-chart.