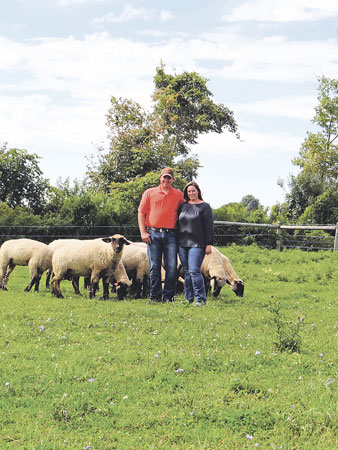 “Genetics do play a huge role in our particular operation,” say Ashley and Adam McFarland, owners and young farmers at Top Notch Livestock, Jordanville, NY. “Our goal for our small seed stock operation is to supply youth and 4-H kids in the northeast with quality show hogs and lambs.”

Ashley, a 4th generation farmer, grew up in the heart of the Finger Lakes in Cayuga County, on a large sheep farm.

“We raised 350 ewes, Dorsets, Montadales, Cheviots, Hampshires, and Rambouillets. I began showing at our County Fair when I was 4-years old. I also competed on a national basis.”

She studied Animal Science at SUNY Cobleskill, continuing her education at Ohio State University, where she eventually met her husband Adam, who had grown up in New Hampshire and was also studying Animal Science, with a focus in animal nutrition.

Both Adam and Ashley were very active in FFA and 4-H as youth, and while Ashley had experience with raising and showing sheep, Adam had raised and shown hogs.

“Adam grew up on a small swine operation in New England where he focused on purebred breeding stock,” explained Ashley. “After college Adam ran a 5,000 head gilt facility in central Ohio. But, after a few years he decided he wanted to move east and get back into show pigs.”

So, in 2014 the young couple found and purchased their small farm in Jordanville and brought in some sheep from Ashley’s home farm.

“Two years later we decided we were ready to get into the hog business. We started off with Hampshires and have since added cross-breeds.”

A short time later, when the young couple became active in their new county’s 4-H auction, they say they realized there were nearly no youth involved in raising lambs or hogs in their area. So, they decided to put together an “Earn-an-Animal Project.”

In 2017, McFarland’s donated one lamb and two hogs to 4-H kids who applied for their Earn-an-Animal Award. 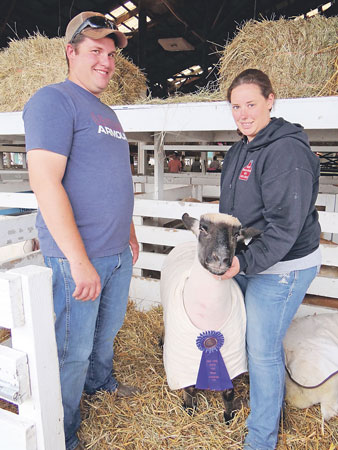 “We both like to give back to youth, since we were in those shoes many years ago and we see it as being very important. Being involved in the livestock industry throughout my youth allowed me to peruse my career in agriculture by working for Cornell University as the Livestock Specialist for Central New York.” remarked Ashley. “Our market is breeding stock and youth market projects.”

McFarland’s search for specific genetics in their livestock giving them the highest percentage of quality from conception through weaning and into adulthood.

Conformation is one feature examined.

“Conformation is key,” said Ashley. “We always look at the ground and go up. If they have a good solid foundation it tends to work its way up to the rest of the body. For our particular animals we look for a square animal that does not drop off in the rear end, length of loin, breed character, and height.”

Ashley says sheep can be difficult to raise and while supplying the correct nutrition is critical, finding and securing a market can also be challenging.

“Sheep are one of the most challenging species to feed due to their sensitivity to copper,” said Ashley. “This is a challenge across the country with every sheep operation.”

Ashley advises new sheep farmers to get involved with sheep farming groups, research breeds to find what interests them, and connect with established breeders.

Getting into the sheep business may not be profitable at this time.

“Currently market prices are not as good as they have been — the future is looking even lower,” Ashley confirms. “If someone is planning on getting involved in the sheep business, I highly suggest they find their niche market first.”

McFarland’s begin lambing in October and lamb until March.

“Some are grass fed, organic, grain fed, etc., or production versus seed-stock. Sheep do require a lot less acreage than cattle. A flock of 100 ewes could easily be kept on 30 acres.”

McFarland’s continue to be active in their county’s 4-H Livestock Program, donating animals in 2018 “to help grow the auction and get more youth involved in sheep and swine.”

They anticipate a larger application pool for their award program in 2019.

“There are a few requirements, but currently, there are five applicants that have earned a hog or lamb. All five have been extremely successful with their projects,” says Ashley, who also provides the youth with showmanship, fitting, and nutrition clinics.

The 2018 Summer Show results point to the success of their programs with youth. 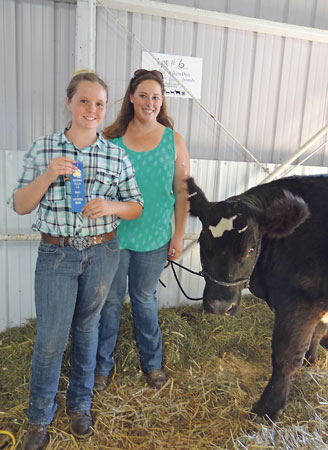 In the Cooperstown livestock Show, Champion Commercial Ewe and Reserve overall went to Laken Dyn with a ewe purchased from McFarland’s in the spring of 2018. Reserve Champion Commercial Ewe also went to Laken Dyn. Champion Market lamb went to Luis Reitz with a lamb earned through the 2018 Spring Earn-an-Animal Award. Reserve Champion Market Lamb went to Luke Loveland with a lamb purchased from McFarland’s.

“Since moving to Jordanville, our goal has been to ‘give back’ to the youth across New York State.”

McFarland’s continue to work closely with Ashley’s family, Dave and Darlene Pinckney, Mathew, Christopher and Melissa Pinckney, with the genetics that have produced winning sheep in the show ring.

“It has allowed the entire Pinckney family to win Supreme Champion Ram three years in a row with a Cheviot buck at the New York State Fair, Champion Cheviot Ewe and Ram in the Junior Show, as well as receiving Supreme Champion Ewe at the 2018 Keystone International Livestock Expo,” Ashley says with obvious pride.

“Without the help from both of our families we wouldn’t be where we are today with our small seed stock operation, we look forward to what the future has in store for us.”