Tony the Longhorn and Itch get new shoes 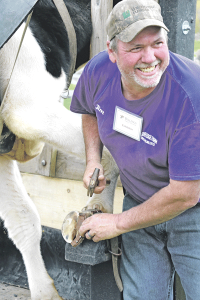 Shades of our American cowboy heritage were present recently when Tony the Longhorn steer was present at the Draft Animal Day in Woodstock, VT. From the size of his two-foot-long horns, and his 1,500-plus-pound bulk, it is easier to get an appreciation of the cowboys’ bravery, herding hundreds with bullwhips, faithful brave horses, little sleep and the promise of a fat paycheck. Unlike the cattle being driven to market for beef, this steer is 15 years old, and has been owned by Jim Palmer of Silver Ledge Farm in Gorham, Maine for most of those 15 years.

There are no gold-tipped caps at the end of his horns because no one makes a set big enough to fit him, noted Palmer. “A friend of mine had him and didn’t know how to handle him,” Palmer said. “He became a lawn ornament. When he passes away, he’ll be buried on our farm.”

He has four other pairs of oxen, including a team, Itch and Scratch, that he drove in that day’s parade. His wife Heidi Palmer showed her own pair of Jersey calves, Maine and Maple. Heidi has worked for 48 years with the 4-H Working Steer Program all over New England.

“A steer is trained to a yoke. At age four, the steer becomes an ox. In Third World countries, you only use what is available; they’ll train a female to a yoke,” said Palmer.

Palmer treated Draft Animal Day attendees to a rarely seen event: ox shoeing. The bleacher was packed as Itch was set in the stocks for his shoeing. He showed the crowd a set of metal Atwater shoes stamped with the year 1827. Ox shoes are shaped like a half moon without the moon’s distinctive sharp tips. “An ox pulls with their shoulders, and all four feet. A horse pulls with his hind feet,” Palmer explained. Therefore, usually only the ox’s front feet need shoeing.

Itch was set in the stocks, with his hind end strapped up to help give support for his weight. “If he goes to lay down or anything like that, this helps to hold him up. I modified this to suit my fancy,” said Palmer as he adjusted the ratchet straps. For trimming he used a rasp, a hoof knife and a trimmer, just like for a horse. “If you have to resort to using a grinder, you risk harming their feet because it’s friction,” he noted. The nails are the same as used for securing a horseshoe, but there is a smaller area on the ox’s outer foot that you can nail to – sometimes less than a quarter of an inch – as opposed to a horse’s hoof, which has a half-inch area to work with. One trick with the nails is to twist the ends of the head of each nail that sticks out and then crimp them to stop them from coming out.”

It was Itch’s first time in the stocks. “He’s a young steer, so it’s a little more of a challenge,” said Palmer.

“It doesn’t hurt him. It makes his feet feel better – a pedicure for a bovine,” said Heidi.

Itch did test the strength of the straps as he kicked, the straps holding his hind weight. As many cattle owners know, their legs can kick in all four directions.

Palmer had braces on the stocks to provide some cushion when the animals kick, minimizing the risk of injury.

The weight of the steer was held by the stocks and not on Palmer’s shoulders – the way that happens when a horse leans all his weight onto a farrier once he picks up a foot and the horse tries to adjust his standing weight. 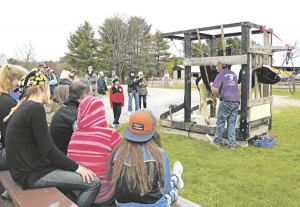 Because oxen have cloven hooves, they are subject to wear and tear injuries in the middle of the hoof. “I had a steer that had a tear that started up his foot. I put a closed shoe on to heal his foot. Some of it was corrective, some of it was for traction,” said Palmer.

With another ox that had a stone bruise, which usually is a black spot on the bottom of their hoof that is very painful, he nailed a shoe onto his hooves to protect them to save the ox from getting hurt any further.

Unfortunately, it is easier to get shoes on then to get them off. Palmer is very clear with owners who want the shoes off later about the difficulty. He shoed one mammoth steer and let the owner know that getting the shoes off would be hard. (The shoes fell off after three weeks, saving him the job.)

Palmer had the unique gift of being able to the difficult job of holding up one of Itch’s hooves and engage the crowd that listened eagerly, talking with him as he worked. One attendee said that he owned a water buffalo. Palmer knew all about water buffalo too.

Itch talked to him too, making noises in his throat that he wasn’t happy, but he stood the test.