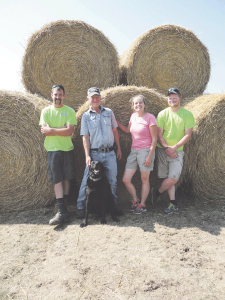 “This is just a small part of what we do,” said Alan and Crystal Tomion about Tomion’s Farm Market, established nearly 18 years ago in Yates County between Penn Yan and the Ontario County line.

Tomion Farm works nearly 1,200 acres of diversified small fruit, fresh vegetables and cash crops. According to the family, the farm is probably best known for the U-pick business and farm market, but there is much more going on than that.

“Strawberries are our number one U-pick crop,” said Crystal.

“That’s what we’re probably best known for: U-pick strawberries — and potatoes,” agreed Alan. “My dad sold potatoes out of a chicken coop in the front yard when he was 18 or 20. My grandfather farmed and my great-grandfather farmed — all in this area.”

In a separate business, Alan’s brother continues with potatoes on 40 acres. Both brothers have U-pick businesses.

The family business is operated and managed by Crystal, Alan and three of their four sons. Trevor, their eldest, lives in California, while Paul, Jeremiah and Lucas all live and work on the farm.

Paul manages the carrots and sweet corn while Jeremiah manages the hay and strawberries. Lucas works with the hay and wherever needed while cultivating his own U-pick pumpkin business and meeting the demand for his meticulous work on two-cylinder tractors. 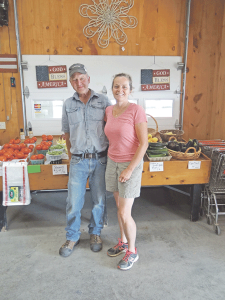 One tractor Lucas restored was donated to NYS FFA’s tractor raffle during the 2017 Empire Days.

“All four of our boys were members of FFA,” said Crystal. “Jeremiah was the president of the Marcus Whitman School District FFA for two years. My kids learned a lot in FFA.”

Paul, who returned after gaining off-farm experience for a few years, described some of the challenges the farm has faced. He recalled past problems with army worms.

“We got them heavy in the wheat a few years ago,” he said. “It was black out there, but luckily we caught them in time. We sprayed it and they dropped.”

Paul said he had sprayed for army worms in the sweet corn. “It costs about a dollar an acre to go through. It’s cheap insurance to get it done,” he said.

The family recently purchased a carrot and sweet corn business. Equipment, contracts and all, came from a retiring friend.

“That’s something that you don’t run into every day,” realized Alan. “The equipment was already there, all set up and ready to go.”

Paul said although the future looks exciting, he anticipates new challenges in requirements for harvesting carrots. “Now, we cut the tops off with knives. They would like to switch to crowning them, which uses a saw blade,” he said.

“It cuts off a lot of carrot,” agreed Paul, “so basically it cuts your yield — and you have to go a lot slower harvesting.”

He said crowning is used in western states and would require their harvester to be retrofitted.

Processors are interested in implementing this method. “It limits what they have to process at the plant,” explained Paul. “It makes it easier for them.” Tomion Farm works with Seneca Foods and Farm Fresh processors.

Paul said he is seeing herbicide resistance with weeds in the muck land where carrots grow best.

“We’ve got resistance and it’s impossible to kill them,” Paul remarked. “We’re limited. We’re just using Lorox (linuron, Group 7) and Capoarol (prometryn, Group 5). That’s all that’s labeled. The big thing is that there are only so many things labeled for carrots that kill weeds, so you’re very limited on what you can do.”

Rotations are strictly observed, and so far things are well with the sweet corn. Hayfields vary in content, with some acreage of pure alfalfa and some specific grass mixes for horse hay.

“Some of it we sell to neighbors to chop,” explained Alan. “We small-bale, we make big bales, round bales – whatever anybody wants.” Leftover hay goes to the auction, as does leftover produce.

Some cover crops have been successful, while some have not. One disaster took place when Tomion Farm tried radishes as a cover crop. “It was the first time and the last time we’ll do that!” said Alan. 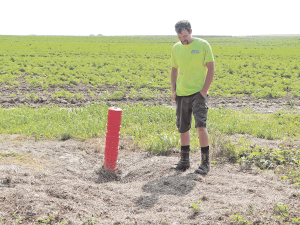 “It was a radish and clover mix,” explained Paul. “It plugged the tile lines. They were plugged solid with roots. Balls of roots. It looked like silk, almost. You couldn’t fit any more roots in there!”

Paul pointed out where four feet of water had drowned out portions of the strawberry field because tiles were plugged and it was such a wet spring. “See where it’s all dead?” Crystal asked. “That was water damage.”

Neither Paul nor Alan had previously heard of any problems such as this occurring. But once the damage was done, folks began to report similar experiences on other farms.

Alan said their farm, as with most farms, face obstacles and challenges every day. Not only is the family close-knit, but Crystal said their community is too.

“We have a close-knit communication here between neighbors and neighboring businesses,” she remarked.

Tomion Farm supports as many local and community businesses as possible. “We try to utilize them all,” said Crystal.

Although the farm does little advertising, they do have a Facebook page and try to keep up to date with a website.

Crystal said she grew up on a small farm with a few cows and horses and worked a bit on a dairy farm in her younger days.

“But most of my farm knowledge came from right here,” she concluded.