To make this farm better 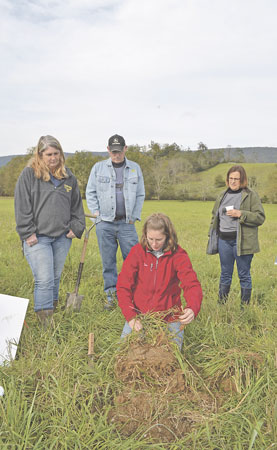 If digging clods of soil from random paddocks in a grazing system provided a picture of soil health, is it worth the effort?

When beef cattle farmers Margaret and Alan Jaymes converted their dairy and crop farm to a grazing operation, they received assistance from NRCS, USDA soil specialists and have seen first-hand how grazing practices affect soil fertility. Part of the work done involved soil sampling throughout the farm to determine fertility and soil health.

The Jaymeses recently hosted a field day and pasture walk on their Franklin county, Pennsylvania farm. The farm is comprised of rolling hills with very little flat ground, presenting numerous challenges for maintaining equal soil fertility among the paddocks.

Jaymes’ goal from the start of the conversion to full-time grazing was to improve the farm. “Our philosophy is to make this farm better than when we started here and make the soil more productive so it can do what it needs to do,” he said. “We’re interested in improving the soil so when we leave this place, the next person will have a good farm.”

The former dairy farm had been intensively cropped and well cared for. Jaymes had been milking cows since 1980 and built the herd to 100 cows. “It wasn’t fun anymore,” he said. “What Margaret and I are doing now is fun. We have about 20 brood cows, 20 calves, some young stock and a bull.” 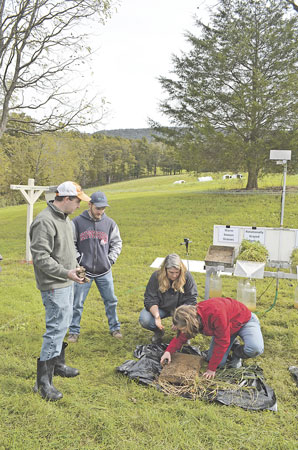 The conversion to pasture began when Jaymes established permanent pasture on a portion of former cropland. He currently maintains 40 acres of pasture, with some still in cropland that will be converted to pasture. “For a lot of it, I simply seeded cool-season grasses,” he said. “I also have warm season grasses, including switchgrass.” Jaymes added that switchgrass can be difficult to establish, but makes great grazing.

Jaymes established one of the first paddocks with no-till oats and switchgrass. “I didn’t get a good stand,” he said. “I mowed the weeds down, and the next spring, I could see some sprigs of switchgrass coming up. I had more weeds than switchgrass for about two years, but it got better every year. I like that in July, when everything else is burning up, switchgrass is taking off. The cows come in and love it.” Jaymes first used Cave-in-Rock switchgrass and later planted Blackwell.

When Jaymes initially pastured cattle on that stand, he grazed it twice — in late June and again in August, and for only a short time. After learning that grazing switchgrass early and before it starts growing, Jaymes realized that practice could reduce competition from cool season grasses. He tested the idea this season, adding the switchgrass paddock to the regular rotation, and has continued to use it in the rotation. Jaymes allows the cattle to graze that stand to about 12 inches, and clips it once or twice a year depending on growth and weed pressure.

When Jaymes found Canada thistle spreading in some paddocks, he found it could be managed with cattle. “I noticed seed heads were missing, and figured cows had learned to eat it while it was young and tender,” he said. “Timing could help eliminate Canada thistle if cows are put in at the right time.”

A limiting factor in the beginning was water access in every pasture, but every paddock now has water. Jaymes says providing water in each paddock eliminates cattle trails and grass trampling, and also saves him a lot of time and labor.

As participants walked through the paddocks, NRCS soil conservationist Lindsey Bream explained the importance of building and checking soil health. “When it comes to soil health, the best thing you can do is walk your fields and start looking at the soil,” she said, breaking up freshly-dug soil samples. “Look at the clod — look for soil falling apart and look for earthworms. Look at root direction — roots should grow straight down and not sideways, which can indicate hardpan or rock.”

Bream discussed some of the obvious changes in soil structure throughout the sample, and pointed out a visible change in color that indicated a higher presence of organic matter. She also noted that while the root systems of different plant species in a pasture vary, each contributes to soil health.

“The most important active soil biology is in the top two inches of soil,” said Bream. “When soil clings to roots, the plant is photosynthesizing effectively, which releases a lot of exudate from the plant and contributes to soil biology.” 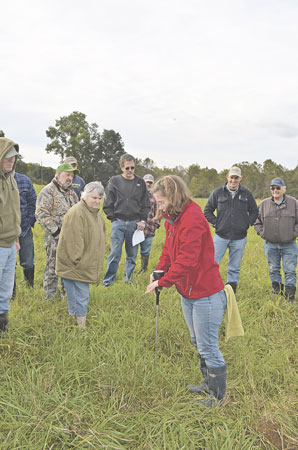 Jaymes says when he started converting cropland to permanent pasture, he plowed first then sowed a small grain crop prior to planting orchard grass. He noticed good stands on hilltops, but hillsides stands were poor, and some remained bare all winter. “I tried a new practice,” he said. “Last winter I started rolling bales out here,” he said. “It made all the difference in the world, and I actually got some grass growing this year. It’s the best thing I could have done.”

Titus Martin, NRCS grazing specialist, says hillside soil and grasses improved as a result of Jaymes rolling out bales for winter feeding. “Cows don’t sleep on a hill,”’ he said. “The only manure deposited on the side of the hill is while the cow is standing, walking or taking a break.”

How does soil health improve if cows aren’t depositing manure? “When the cow gets up, she doesn’t take everything with her, and that protects and feeds the grass,” said Martin, referring to cows’ habit of dropping manure upon rising. “Cows like to eat where no other cow has been. With hay on the side of the hill through winter, we can build soil on the side of the hill he builds soil.”