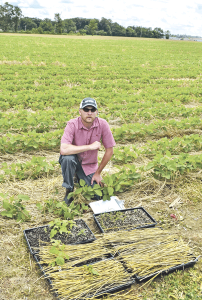 Farmers are adopting a new twist on no-till – they’re planting green. The concept involves planting a cash crop into a cover crop prior to spraying or rolling the cover crop down, resulting in an overlap of the life cycles of two crops. The system begins in autumn with a carefully planned cover crop, so now is the time to begin planning for planting green.

“I like to think of managing the weed seed bank rather than controlling weeds in the crop,” said Wallace. “Most fields have 15 to 30 different weed species, but you might not see every species in any given year. That’s because weeds are capable of remaining dormant in the soil. Dormancy has evolved to tell those weeds ‘conditions are not conducive for germinating.’”

Wallace explained certain factors are responsible for turning off the dormancy genes and telling weed seeds to germinate, and all the factors are related to disturbance. “We have selected for weeds that are very adaptable to disturbance,” he said. “There are four general factors that get weed seeds to germinate in the soil: fluctuation in soil moisture, soil temperature, changes in gases in soil (such as a spike in oxygen after soil is aerated during plowing) and amount of light and light quality.”

Planting green influences all the cues for weed germination, and Wallace said farmers who adapt this practice are likely to see, over time, a shift in the types of weeds – usually to the most problematic weeds.

Wallace said weed ecologists have learned that larger weed seeds have more energy reserves to get up and through the soil. “During the full-tillage era, we were distributing weed seeds through the soil profile,” he said. “We were dealing more often with larger-seeded species like morning glory, bur cucumber and velvetleaf. In transitioning to no-till systems, we’ve selected for smaller weed seeds that can only germinate close to the soil surface. Those are the most problematic weeds – they’re prolific seed producers, produce a lot of small seeds and most likely to develop resistance.”

The majority of resistant weed species are small-seeded, including two troublesome pigweeds – Palmar amaranth and waterhemp – and marestail. “Marestail is the smallest-seeded weed species we deal with,” said Wallace. “Seeds are germinated almost entirely on the soil surface.”

Wallace compared germination in smaller seeded varieties to larger seeded species relative to crop residue. Annual morning glory is a larger-seeded species, and in a tray with no crop residue, there were notably more plants. “The plants came up faster and the plants are bigger,” he said. “In the tray with heavy residue, light was inhibited and there were significantly fewer plants.”

Weed seeds rely on energy reserves to rise through the soil surface before they can start to photosynthesize. With heavier crop residue, weeds rely more heavily on energy reserves. In general, this is why heavier residue provides better weed suppression over time, and potentially prevents selection for herbicide resistance.

Wallace explained why marestail (horseweed) is a difficult challenge. “It’s a winter annual,” he said. “We see a flush of marestail in late fall and a flush in spring. The competitive interactions important with marestail depend a little less on what you do at planting and more about how quickly cover crops are established in fall.”

The challenge then becomes “If marestail persists in the cover crop, and we know it’s glyphosate resistant and we think it’s resistant to ALS inhibitors as well, and we know it’s very hard to control in the crop, how do we make sure there’s an effective burn-down application in the cover crop?” Wallace suggested managing marestail early for best results. “It becomes more challenging to get the herbicide down through the residue to control marestail when it becomes bigger,” he said.

Wallace provided some tips for effective burn-down programs, whether planting green or tilling the cover crop early. “In general, most farmers who are making it work are using cereal rye or winter wheat ahead of corn or beans,” he said. “The most effective burn-down herbicide for a grass cover crop is glyphosate, but there are few considerations to make sure glyphosate remains effective.”

When the cover crop is burned down in early spring, the environmental conditions during glyphosate use will determine its effectiveness. “Glyphosate is systemic,” said Wallace. “It works best on actively growing cover crops for good translocation through the plant. A good rule of thumb is to use it when there are several days at 55 to 60 degrees during the day. Those are conditions for actively growing winter cereal cover crop and the burn-down will be glyphosate.” Wallace added that a tank mix is often appropriate for burn-down, but cautioned that glyphosate and clay-based herbicides are antagonistic in the tank.

One resistance management approach for limiting difficult weeds such as marestail or pigweed is the use of residual herbicides. “We have more effective products to use for those species to control them as they’re germinating, but there are some challenges in using residual herbicides,” said Wallace. “If you’re letting the cover crop get big, and either planting then coming in with burn-down product at or after planting, or rolling it, consider adding a residual herbicide.”

But how much herbicide is getting down into the soil profile and to the weed? Wallace said that when spraying into live, green cover, the burn-down product should have good enough coverage to kill the cover crop and the residual herbicide should get down into the soil. “We think part of the residual herbicide is tied up in the residue,” he said. “We may not be completely losing efficacy, but it may be delayed until there’s water to work it through the residue. We think there might be a difference between water soluble herbicides and how they work through the canopy.”