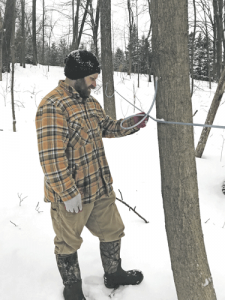 As winter snow melts and daylight lingers into evening, nearly everyone looks forward to the warmer days of spring. Some are also hoping for a run of late winter cold nights coupled with moderate daytime temperatures to help get the sap flowing for maple syrup.

Mike Ryczek of Agawam, MA, began tapping trees for sap in 2004. Since Ryczek, his wife Rosann and their two sons don’t own forested acreage, they collect sap from maple trees on four properties in their area. Although Ryczek started with a bare bones system to reduce sap to syrup, he has since added equipment and now collects from 275 taps.

Like most endeavors that involve nature, sap collection is controlled by what’s happening outside. “We watch the weather,” said Ryczek. “After a long cold spell, when we have long spurts of above-freezing weather during the day and the nights are cold, that’s when we tap. We like to see average nighttime temperatures in the twenties and daytime temperatures in the forties.”

Ryczek keeps temperature and weather records from year to year so he’s prepared for sap collection, but he still has to maintain a close watch on current temperatures. “We take a sample every day we boil,” he said. “That way we have a record of the first boil and the last. At that point, we can figure out when to tap trees.”

One of the main challenges for those who collect and run sap through tubing is destruction of tubing by wild animals. Ryczek’s main issue is squirrel damage that occurs during summer, so part of the prep work in autumn and early winter involves checking tubing and replacing or repairing breaks. In one location, Ryczek replaces about 500 feet of tubing each year.

When Ryczek started collecting sap, most of the trees he tapped were Norway maples. Storms have since taken many of those trees down, and today he relies more on sugar maples for sap.

Most years, Ryczek starts tapping the first week in February and continues through April 1. “Some years we can boil all the way through April,” he said. “We don’t know what each year is going to bring until we’re there. It takes a lot of time, but the vacuum system helps with collection.” Although it’s impossible to predict the flow, he often collects around 200 gallons of sap per day. 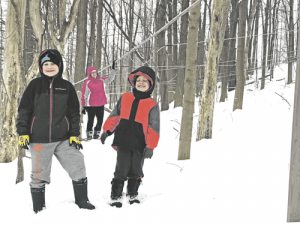 Even when weather conditions are just right and sap collection is going well, a deep cold snap can sideline the process for days at a time. “When I start the vacuum system after cold weather, there are chunks of ice in it and the system can become clogged,” said Ryczek. “Slush comes down the line, fills up the releaser and the whole system just stops.” Although sap flow from the re-start is initially slow, Ryczek said after the cold spell, the trees seem to “recharge” and he gets a much better flow.

In 2006, Mike and Rosann used locally sourced lumber to construct the building dubbed “The Maple Hut,” where they boil sap, bottle syrup and share the process with the public. When they built the structure, their goal was to make it look as old-fashioned and authentic as possible. The Maple Hut houses equipment, including a two-by-six Leader Patriot boiler and a reverse osmosis machine.

“Reverse osmosis removes water and can take the sap from two percent sugar content to about ten percent sugar content,” said Ryczek. “At that point it doesn’t take as much wood for the boiler and we don’t have to spend as much time out there boiling.” He recalled collecting 400 gallons of sap one day, and after sending it through reverse osmosis to remove excess water, 200 gallons of sap remained. “Before we had the reverse osmosis machine, we’d be out there from five in the morning until two the next morning boiling sap,” he said. “We save about seven or eight hours of boiling.” After boiling, Ryczek bottles the syrup in bulk and fills bottles throughout the season.

“We try to spend as much time as possible with everyone’s questions,” said Ryczek. “They can see the process and taste the syrup.” The most often-asked question is how much sap it takes to make one gallon of syrup. To help illustrate his answer, he shows people a 55-gallon drum and explains that it takes about that much sap for one gallon of syrup. He also invites guests to taste the sap, and most are surprised to find that it has almost no flavor.

In addition to selling bottled maple syrup, Rosann makes maple sugar candy. “That involves using the lightest syrup possible and boiling it down a little further,” said Ryczek. “Then she pours it into molds.” The Maple Hut also houses a cotton candy machine, and the sweet treat is always a favorite among visitors.

Visit the Maple Hut on Facebook for more information.