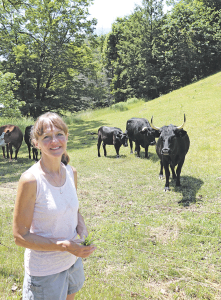 When Laura Scott calls her Dexter cattle, they come running. On a beautiful June morning, they gamboled, ambled and ran down a slope to the fence to see what she had to offer them. A rare and hardy heritage breed that originated in Ireland in the 1800s, they are small and compact, about three to four feet high, the size of a small pony, and very inquisitive. They are a dual purpose breed, used for milking or beef.

Because of their compact size, they calve easily. “They have small babies and are fantastic moms. They let us handle the babies, let us get right in there with them,” said Scott. Hardy foragers, they thrive on half the feed of a larger animal. At the moment, her herd of 11 long-legged Dexters are keeping the field down for her neighbor Douglas Clark in Buckland, MA. According to the Livestock Conservancy, which tracks endangered breeds, they were named after a Mr. Dexter who promoted the breed in Ireland.

Scott’s cattle in Buckland are part of their Double D Dexters herd. The others are in nearby Goshen.

Her daughter Colleen Routhier keeps eight short-legged Dexters at the Double D Farm in Goshen. She milks her Dexters, and makes mozzarella out of their milk. She also raises Lippitt Morgans. Dexters can produce one and a half to two gallons with 4% butterfat daily.

For the first time, three generations of the family participated in the 2019 Strolling of the Heifers. As Scott pushed her granddaughter Audrey in a stroller, and her daughter-in-law Kaleigh carried her grandson Chase, Colleen and Scott’s other granddaughter, Leah, walked the short-legged Dexter calves through downtown Brattleboro, VT with the rest of the calves, cattle, tractors, farmers and floats. “I love that parade. As you walk through town, you hear the ‘ahh’ of the crowd,” Scott said. “We will definitely do it again.”

Scott has been raising Dexters for over 20 years. “When my son was nine, he wanted to be a farmer, and all the cows were huge. I read an article about Dexter cattle written by a Canadian woman who raised them,” she explained, and they fit the bill: they were small, hardy foragers and handled easily, when handled properly.

Serendipitously, they found a woman in nearby Gill who raised them and sold them a heifer. She was very impressed with her son, Dustin. A short while after meeting them, the breeder contacted them again and said that she would really like to see Dustin go further, and offered them a confirmed bred heifer that was due to calve that September. At the time “Dexters were on the critical list,” said Scott.

Dexters are now on the Recovering List of the Livestock Conservancy. They come in three colors: black, red and dun. Heritage breed Dexters have horns, and do not have polled genes. “A lot of the Dexters have our pedigree, without polled genes. For traditional breeding, we try to keep it as pure as we can,” said Scott.

Two decades later, along the way, a polled gene was bred into some of the other existing Dexters because owners do not want to deal with horns.

“An awful lot of people are raising polled animals. I can understand that. I breed mine for the purest of the pure,” said Scott. 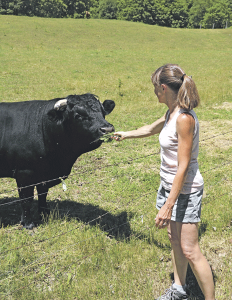 For safety’s sake, “we did de-horn this year just because we have young kids around,” said Scott. “I don’t think any of our animals would hurt us intentionally. They might go after a fly, and it would happen unintentionally.”

When they first got the Dexters, they showed them at Hancock Shaker Village, which hosted a Rare Heritage Breed Show. Twenty years later, her son Dustin is no longer involved with the Dexters. He and his sister Colleen are firefighters in Northampton.

Scott sells Dexter stock, and sells Dexter/Holstein calves to people wanting to raise beef cattle. She is boning up on butchering, because they are considering butchering some of their stock for their own meat supply this year. Dexters take from 24 to 28 months to mature for the meat market. Bulls reach 250 pounds of lean carcass weight within a year.

They asked their neighbor, Doug Clark, to name one of their bulls. He named it Rokie, after his father. Rokie is now in New Hampshire at Riverbank Dexters, owned by veterinarian Matt Mason. Because Dexters are very smart and trainable, he uses Dexters while training the Australian shepherds and border collies he also raises. “He really liked our stock because they are calm,” said Scott.

One of their cattle, Pippa, named after the Duchess of Cambridge’s sister, is due to calve any day now. Scott pointed out the bangs on another cow’s poll named Mikayla, also ready to calve. “They say if they have a messy poll, it’s going to be a girl. If it’s straight, it’s going to be a boy. Perhaps that’s an old wives’ tale,” said Scott – but she noted this saying has proved correct occasionally. If it proves correct this time, Mikayla is going to have a boy, because her poll bangs are straight across, as though a barber has trimmed them.