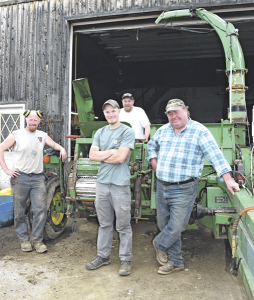 MILAN, NH – Rick Flint, whose grandfather Lloyd Flint started farming in the Androscoggin River Valley, is pleased (but surprised) that his sons – Josh, Caleb and Daniel – would like to stay on the Flint Farm in Coos County. His daughters, Kathleen and Hannah, remain involved with the farm but at the moment neither sees it a career path.

Once his sons began to indicate their growing commitment to becoming fourth-generation dairy farmers, Rick set about increasing the size of his herd plus the amount of hay and corn he grows to sustain them.

Because of the severe disruption caused by COVID-19, Agri-Mark recently required its cooperative members to ship, on average, 5% less milk, Rick explained. “So, we’ve had to cull the herd beyond what we’d like to, and gotten low prices for them with the market so flooded,” he said.

Working together as a team appeals to the Flint brothers. “We like the lifestyle: there’s a good balance of work and social life. We all have our areas of special responsibility, and yet we can all pitch in and do almost everything,” Caleb explained.

The Flint Farm has some 400 acres, but a lot of it is wooded and not farmable, the owner said. “We’re cleared some, but it’s really more effort than it’s worth to both clear and stump it,” Rick said. “We also have the use of another 300 acres; we rent a lot and are allowed to use some, often by friends or extended family. But it turns out ‘rock-picking’ land that you don’t own doesn’t really pay off.”

Rick has focused his efforts at Flint Farm on improving both the quality of the cows that he and his family breed and raise and on the quality of the crops they grow to make haylage and corn silage. “I have 200 acres of grass and 200 acres of corn, and both these high-quality crops are stored for winter use in four bunker silos. We spread the cows’ manure on our fields, although we don’t have a modern manure management system. At most, we can only store two weeks’ worth of manure in a pit before we spread it. We also buy a lot of fertilizer. We plant our corn as early as we can so it can really mature, and we cut our hay as early as we can so there’s more protein in it. This far north, we have short seasons.

“We’re pretty independent when it comes to breeding the cows,” Rick continued. “Our milk has high butterfat content and protein – that’s what we breed for. We do all our AI ourselves; we buy semen once a month.”

Rick is a 1979 UNH graduate, with bachelor’s degrees in animal science and business administration. He’s now bowed out of the milking rotation entirely; his sons count on him to keep the books. Rick admits, however, that he hasn’t learned how to use all the electronic tools now available.

Three of the next generation also earned UNH degrees: Josh, Caleb and Hannah (who is a feed representative for Poulin Grain). Daniel earned an associate’s degree in diesel mechanics from White Mountains Community College.

Rick’s wife Karen, an R.N., worked for 20 years running Yankee Gardens, a fresh garden vegetable/bakery shop. “When the mills were up and running, we grossed about $100,000 a year, but only about half of that after they were shuttered,” Rick said. “The number of tourists, RVers and second-home owners on this side of the county traveling through weren’t enough to support the shop, despite all of Karen’s effort and hard work. Now we plant a few acres of sweet corn and sell the fresh ears on the honor system at a small stand.”

About 20 years ago Rick installed a then-popular pre-fab “solar barn” that is easy to keep clean and is light and bright, although hard to “button up” in the harsh North Country winters. Cows are also housed in a second, older barn. “If we’re going to grow our herd, we’ll need to add onto one of the barns,” Rick said, noting, however, that this is a tough time for dairy farmers to even draw up a solid business plan.

Some 10 years ago the family built its own new milking parlor: a double-eight parallel. Flint Farm milks at 4 a.m. and 4 p.m. One worker does the milking, and the other “pushes the cows” and does the cleaning and feeding. Flint Farm has two full-time employees – Eric Seller and Molly Sloane (who is also Daniel’s girlfriend).