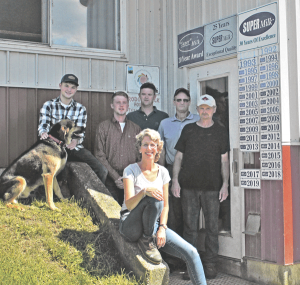 Thirty years can seem like a long time. On the other hand, for a farm that has been operating since 1853, it can seem like just the blink of an eye.

The Empire State Milk Quality Council (ESMQC) has been bestowing its Supermilk award for 30 years. In that time, thousands of dairy farms have been recognized for the quality of their milk, but just 16 have earned the distinction every year for the past three decades.

Gettyvue Farm is one of those choice few.

For 167 years, Gettyvue has been operated by the Getty family in Granville, NY. Seventh generation farmer Brian Getty now runs the farm along with brothers Kevin Getty and Terry Getty and sister Diane Getty Smith.

“We’ve been here since our ancestors left Scotland and Wales,” said Brian. “Most of us have stayed in New York, but some went to Pennsylvania. We like to joke that they ended up with the better weather.”

Gettyvue actively milks a herd of 200 cows on its 420 acres, which has also seen use in growing crop corn and alfalfa.

“We think the Supermilk award is great. It’s a big honor around here. I think seven of the 20-year winners were from the Washington County area here. But we would like to see the standards raised even more,” Brian said.

Brian boasted that in addition to being a 30-year Supermilk award winner, Gettyvue is also the only farm in the Northeast to win the National Dairy Quality Award (NQDA). The NQDA honors dairy producers from across the U.S. who have successfully placed high priority on producing milk of the highest quality. The farm is a two-time gold winner (in 2013 and 2019) and a one-time silver winner (in 2005).

Gettyvue Farm was also named a 30-year Dairy of Distinction by the Dairy Farm Beautification Program. This award is granted to dairy farms in New York and Pennsylvania that maintain the highest standards of quality and care for their herds.

Gettyvue’s high quality milk is one of the main reasons they’ve been chosen to be suppliers of the Stewart’s Shops chain of convenience stores. Headquartered in Ballston Spa, NY, Stewart’s Shops has over 300 locations. The chain only sells dairy products from a shortlist of 24 select providers.

The Gettys are also busy making plans for the future. A family farm with a nearly 170-year history tends to have a lot of momentum behind it. Winston (Brian and his wife Winifred’s son) and Jacob (Kevin’s son) are now the eighth generation of the family to have an active hand in the farm’s operations.

Brian is also seriously considering mechanical upgrades. “Robots are the next step,” he commented. “My mother took a look at the automatic milking machines years ago. They used to be very clunky, very awkward. But the robotics they have out now is pretty advanced stuff. We’re going to keep doing what we have to to keep producing the best milk we can.”