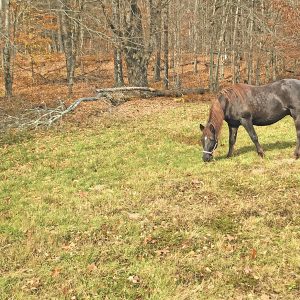 The fall foliage has been spectacular in our part of the country this year – brilliant reds and oranges, glowing gold, yellow and bronze with just enough evergreens to fill out the color palette, along the bright blue October skies and bright white clouds. But did you know that some of those leaves, beautiful as they are, can be toxic? Horses, ponies, donkeys and mules who eat fallen, wilted or dried leaves of some species of maple can be fatally poisoned. An article covering this topic by the editors of Equus Magazine and revisited by Helena Ragone, Ph.D., was brought to my attention and seemed important to mention.

Maple poisoning has been attributed mainly to the red maple (Acer rubrum), also known as swamp maple or soft maple; however, research has shown that other trees, such as sugar maple (A. saccharum), silver maple (A. saccharinum) and their hybrids might also be toxic and cause poisoning in equines.

The fresh green leaves of maples seem to be less of a problem, but wilted leaves that have fallen can cause a problem if consumed by your horse. In addition, the bark and small twigs/branchlets might also be toxic if eaten in quantity by horses and other equines.

Having heard the term “maple poisoning” in the past, I contacted our local large-animal veterinarian, Dr. Joseph Nebzydoski, to ask if he’d seen any cases in our area. He had not, but offered that it would probably take a significant quantity of ingested maple leaves to cause a problem.

From his research, Dr. Anthony Knight, a large animal vet, plant toxicologist and professor emeritus at Colorado State University, stated that it is the dosage that causes the poisoning. “Red maple toxicity is not common, simply because most people feed their horses well and pay attention to what their horses are eating,” he stated. “A horse may eat a few maple leaves on occasion, but an adult horse would need to eat one to two pounds of the dried or wilted maple leaves to be affected by the toxin. It is the dose that makes the poison.”

The red maple is easily identified by its leaves, which are toothed or serrated, with three lobes separated by serrated V-shaped valleys. The leaves are green in spring and summer with shallow notches, bright red stems and a whitish underside; in autumn, they turn a bright red.

While the ingestion of green and growing red maple leaves does not have an apparent negative effect, it is the wilted leaves that pose a danger to horses. When summer storms cause branches to come down into grazing areas, or when autumn leaves fall, the potential for maple toxicity exists. As little as a half-pound of leaves can be toxic to small ponies or miniature donkeys. Symptoms of maple poisoning can appear within just a few hours up to four or five days after ingestion.

The damage is caused by toxins in the leaves that damage the hemoglobin that carries oxygen in equine red blood cells. These cells may rupture and clog the kidneys with waste products. The liver and spleen remove the damaged cells from the blood faster than they can be replaced by the bone marrow, and this causes severe anemia. Due to oxygen depletion in the blood, other tissues and organs begin to fail; the horse will exhibit pale yellowish gums that gradually turn dark muddy brown, and will pass dark red to black-colored urine. Other signs to watch for include lethargy, refusal of food, rapid heart rate and increased respiratory rate, dehydration and colic.

Knight recommends that if you see or suspect that your horse has ingested wilted maple leaves, remove the horse from the source of leaves and contact your vet immediately – don’t wait for symptoms to appear. Treatment consists of administering large amounts of intravenous fluids and possibly blood transfusions, and recovery is dependent on the quantity of leaves that were consumed and how promptly the horse receives care.

A study at North Carolina State University in 2006 showed that of 32 horses affected with red maple poisoning and admitted to hospitals, 29 were anemic, 24 showed serious systemic inflammation, 12 suffered kidney dysfunction, 13 had colic, nine developed laminitis and 19 (or 59% of these cases) died.

Horse keepers should be aware of the types of trees growing in and around their horse’s turnout area, and fence off maples if possible, especially if the horse is a cribber. Make sure your horse has enough pasture or free-choice hay so it is not tempted to nibble on branches or leaves. Remove any maple branches and leaves that fall and make it a habit of inspecting turnout areas after storms and high winds. By being mindful of your horse’s turnout situation, providing enough food and inspecting pastures and paddocks on a regular basis, you can limit the chances of maple poisoning.