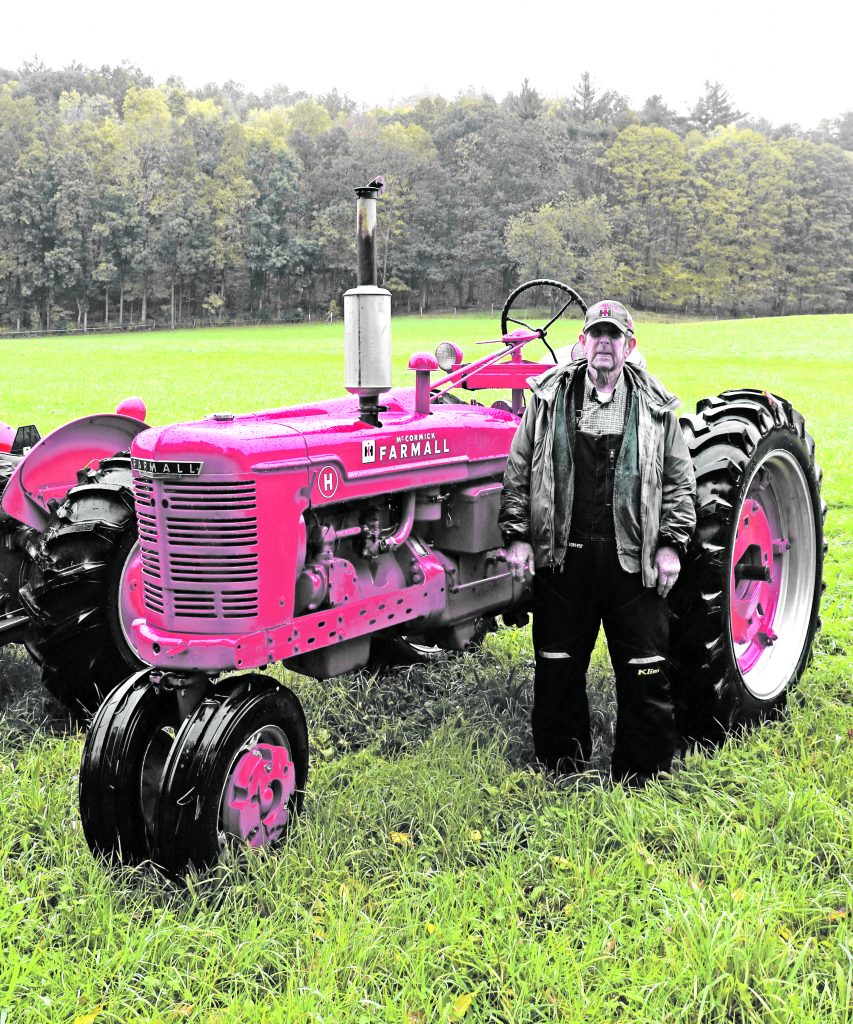 by Laura Rodley
Despite pouring rain, 17 antique tractor enthusiasts hit the road during the third annual Franklin County Chapter’s Massachusetts Farm Bureau Federation’s Antique Tractor Ride, covering 29.5 miles in scenic Western Massachusetts. The riders departed from and returned to Shelburne, MA.
President of the Franklin County Chapter of MFBF for the past decade, Ashfield resident Lenny Roberts, who owns Roberts Brothers Lumber Company Inc. in Ashfield, gathered with the farmers before the ride, warming their hands over a fire in an oil drum. “We are promoting agriculture in Massachusetts. We would appreciate everyone buying local products, looking at the farm next door to them and buying from them, instead of going to grocery stores, and buying from their local sawmills rather than going to Home Depot,” he said.
Dave Freeman of Freeman Farm in Heath, MA, rode a 1972 Massey Ferguson 255 Orchard tractor, which sits low to the ground to be able to ride underneath branches in an orchard. This was just one of 14 working tractors that he uses on his farm, where he and his family raise beef.
Freeman said, “We had a beautiful ride despite the rain. We rode up behind Gould’s Sugarhouse, along back roads behind Davenport’s Farm, along Old Greenfield Road, South Shelburne Road, behind Kubota Tractors and back to Foxbard Farm” – where they had a cookout, serving beef that was produced at Foxbard Farms and donated to the group with all the fixings.
Larry Malinowski of Foxbard Farm, assisting farm manager Kurt Benson in raising Black Angus beef cattle, drove a John Deere tractor.
The entourage departed at 9:30 a.m. and tried to average traveling at 15 miles per hour. Along the way, they stopped at Apex Orchards high in the hills in Shelburne and feasted on cider and donuts.
“We returned at five minutes to one, the same time the sun came out,” said Freeman.
The rider that hauled his tractor the farthest for the event was Russell Glidden of Framingham, MA. He has participated in antique tractor rides for the last 10 years. He owns Russell Apiaries, managing 10 hives. He owns two tractors.
Jim Richardson raises pigs, hay and lumber on 300 acres on Richardson Farm in Shelburne, MA. He drove an Farmall H tractor that belongs to Bob Warren over Bardswell Ferry Road in Shelburne, just a short jaunt to join the event, with no need for trailering.
The riders were primarily MFBF members. A fee is paid upon sign-up to join the ride, a portion of which is donated to 4-H. “We always make a donation to 4-H,” said Freeman.
Visit www.MFBF.net for more information.