They saved my life 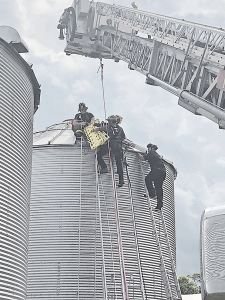 On a sunny day in late May, longtime Ohio crop farmer Jay Butterfield was going about his regular farm duties, including working in one of the farm’s grain bins. When Butterfield found that the auger in the bin was clogged, he used a plastic rod to dislodge it. Butterfield was successful in his effort to free the soybeans, but he also dislodged the crusty surface he was standing on.

What happened next quickly became life threatening. Butterfield fell through the crust and found himself immersed in soybeans. The already dire situation became worse for Butterfield when he realized his shoestring was caught in the auger, causing the beans to fill in around him.

Butterfield yelled for help, and although no one heard him, his brother-in-law was nearby and checked on him. He found Butterfield in grave danger and immediately called 911.

Chris Johns, assistant fire chief for Ross Township in Ohio, said when the call came in, the county technical rescue team was immediately mobilized. The team is comprised of members of all the departments in Butler County, and has the equipment, knowledge and experience necessary to perform a safe grain bin rescue.

“They’re very well trained, and very well qualified,” said Johns, adding that the technical rescue team did the majority of the actual rescue. “They’re the guys I’d want there if something like this happened to me.” Johns added that much of the equipment, including a tower truck, were from neighboring companies who work together.

“On dispatch, we knew it was serious, so we called for our mutual aid companies to get them on the road,” said Johns. “We knew we had more people coming.” About halfway through the three-hour rescue, Johns counted about 55 rescue personnel on the scene, and more arrived as the effort continued. 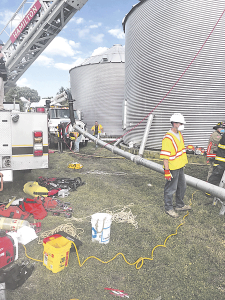 When Johns arrived at the farm, ladders were up on the grain bin and responders were inside the bin with Butterfield. By then Butterfield was up to his chest in beans. One of the mutual aid companies used a long tube to feed fresh air to the inside of the bin. As soon as they could safely reach him, rescuers tied Butterfield’s wrists with a handcuff knot to prevent him from going down further into the soybeans.

One of the risks in entering a confined space is toxic gases. “Our chief has a lot of experience, and the first thing he did was put a gas monitor down into the bin to monitor air quality before we sent anyone in,” said Johns. “When we do the readings, we lower the gas monitor down a little at a time to get readings at the upper level, middle and lower levels.”

A key piece of equipment used in grain bin rescues is a grain tube, a series of oblong, curved metal plates that create a tube when assembled. “We put the plates around the victim,” said Johns. “It creates a barrier between the victim and the grain, then we put a battery powered auger down there to suck the grain out from around the victim. It helps the victim breathe easier and helps us gain access to him.”

One aspect of any rescue is reassuring family and neighbors who gather, desperate to see the farmer out of danger. Although an outsider may have viewed the procedure as too slow, every team member had a role. “We had to explain to people that we had to look at the big picture and do it methodically and slowly so it’s a good outcome for both the victim and the rescuers,” said Johns. “The guys we had on the scene were very experienced.”

Johns said a medic and a captain from a neighboring department acted as a liaison for the family to keep them updated on what was going on. “The farmer was alert and oriented the entire time, which was a big relief for us,” said Johns. “But we knew it was still a critical situation.”

Despite rescuers’ efforts, the progress wasn’t fast enough. Butterfield continued to sink deeper and was soon spitting soybeans out of his mouth. “That’s when we decided to use Plan B,” said Johns. “We needed to cut the bin open and get the soybeans out. When we’re cutting with all that grain and dust in there, we worry about a dust explosion, so there were two hose lines on the bin while they were doing that operation. If there was a dust explosion, there was already water there.” 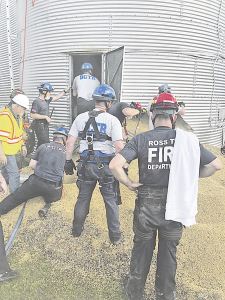 As an experienced team member used a reciprocating saw to cut holes in the grain bin, a steady stream of water helped keep the metal cool. Johns said the crew started cutting two holes to get the grain out faster. “They cut about four to five feet up, and we called a vacuum truck,” he said. “When the grain started coming out, we put the vacuum truck up to it to start sucking the grain out from around where they were cutting to get the beans out of the way.”

Johns said the area is rural and most companies are comprised of volunteers. “There are a lot of farms, and a lot of the volunteers are farmers so they know what they’re going in to,” he said. “They do a lot of training on farms, and are very well trained for this kind of incident.” Johns added that if Jay had been alone, without someone outside the bin to call for help, the outcome would have likely been completely different.

In one of several television interviews conducted after he returned from the hospital, Butterfield said, “I thought ‘this is my last day on earth – they saved my life.’”