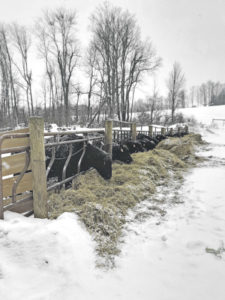 I have the privilege and the pleasure of having a vet for a wife so what I know and what I do is from her knowledge and skill. From time to time people drop off an orphan or down calf needing some support. Many beef cows are on a low nutritional plane, even in the last trimester. This can put the calf in a weakened state when born. Here’s what we do to get them up and running if they had a slow start.

It was a windy, 10º weekend and any calf hitting the snow-covered ground that day would have trouble unless they were penned up inside. One came over but we were ready with a clean, dry pen with plenty of straw. The red lamp hung in a corner in case Junior wanted some warmth. She was a small Hereford cross, about two days old and shivering cold. We never “assume” they had colostrum or had enough milk to get going. Right off, we take internal temperature to check for hypothermia and/or infection. Her temp was elevated so she had some infection. Her lungs were clear and she had good suckle – no need to use the stomach tube. Passing the tube on calves is always good to know, as many are too weak to suckle and forcing them tires them out or sends milk down the trachea. In the case of this calf, she got medication and antibiotics to keep from getting worse. She also got a bottle of high quality milk replacer as well as an electrolyte/glucose combination that kept her hydrated as well as energetic. The total volume mixed was a quart and a half.

That evening, she got another feeding of the same. The next morning, her temp was down and she was ready for more milk. She would lay against the wall of the pen and always under the red lamp; she wanted heat. In three or four days she was getting two quarts twice a day with re-sorb at noon. Her nose was frostbitten and peeled off like a big scab. That took about a week or so to heal. Everything is normal now and she is growing by the day. She is about a month old and not looking back.

If you see a calf hit the snow soaking wet in low temperatures, don’t wait. Get them in a pen in a hurry and help dry them off. Dry equals warm, and they can better stand the elements once the haircoat stands up. Dip the cord to help seal it off. Get the first milk into them soon. Colostrum is medicine in itself, but after 24 hours the calf can’t absorb it. We always use vitamin E and selenium (Bo-Se) at birth. If the mother isn’t attentive or is a first timer, be watchful. If the calf is not able to stand, help with nursing or milk out the mom if they have a strong suckle and bottle feed. Many don’t suckle right off – we tube some for one or two days till they get a suckle. It buys them some time and they get warm and fed till they can nurse on their own. Many calves are lost because of starvation and sometimes Mother Nature needs a helping hand, especially in winter. Timely intervention can mean the difference between life and death. If you are unsure, always consult a vet with experience with cattle and calves.

Much can be done to save a calf if you’re willing to put in the time and give help where needed. We don’t calve in the winter anymore but time it with the growing grass in May and June. It’s better for the calves and less stressful on the moms too. We feel the cow spends all her time making a calf so we should be willing to help get one going once it’s born. After all, domestic livestock is dependent on humans for most everything. For all they do for us by providing food, it just seems right to take care of them in return.