The sons coming up at Newmont Farm 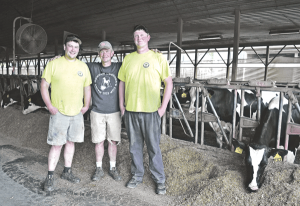 FAIRLEE, VT – Newmont Farm LLC, whose name combines the home states of both its founders, was a small operation in 1988 when it was bought by Walter Gladstone, who grew up on a 40-cow dairy farm in upstate New York, and his wife Margaret, who grew up on one three times as large in Montpelier.

Walter earned an associate’s degree in ag science in 1982 from SUNY Cobleskill and a B.S. in animal husbandry in 1984 from Cornell. Margaret graduated from University of Vermont in 1985 with a degree in elementary education. They married a year before they purchased the farm at a foreclosure auction. (Margaret’s brother and family own Fairmont Farm in Montpelier, one of the state’s largest dairy farms.)

Now, two of the three Gladstone sons – Will, their oldest, and Matt, their youngest – are active owner-managers. Middle son John opted to cut his own path.

Will knew before he entered high school that he wanted to be a dairy farmer. He graduated from Vermont Technical College in 2008 with a degree in dairy farm management, and he became a Newmont owner in 2012. He manages the herd and works with the employees who handle the cows. His fluency in Spanish is an asset.

Matt graduated in 2013 from SUNY Cobleskill with a degree in ag engineering, and he manages and maintains the equipment at Newmont, becoming an owner in 2019.

“Those who work on the farm are the backbone of everything we do on this farm, from milking, cleaning, harvesting and repairing equipment,” Will explained. Although there is overlap, the farm is divided into four management areas: cattle, equipment, field work and bookkeeping.

Each owner is a working manager. Walter now specializes in field and crop management and oversees the employees who work outside. Margaret runs the farm’s busy office, including managing payroll and sending out and paying bills. The couple also own and operate a small Morgan horse farm at which four to six high-quality foals are born every year.

Newmont’s milking team is made up two groups of three milkers who work 12-hour shifts. Milked three times a day, the herd averages about 92 pounds a day.

An outside contracted team is responsible for cleaning the barns and feeding the herd and also helps with growing crops and spreading manure.

The cows are fed once a day. A nutritionist regularly visits the farm to ensure all the different groups of cows are being fed the right nutrients based on age and what stage of lactation they are in.

“We buy all our grain, and we grow all our own corn silage and haylage on our farm and here in the Upper Valley,” Will said.

The family-owned farm has stayed up-to-date on the technological advances that allow cost savings, greater efficiencies and data-based decision-making.

“Our calves at birth are now given a numbered ear tag that contains a microchip that not only serves as a lifelong ID but also allows important individualized information, ranging from milking time to quantity of milk produced, to be automatically synced,” Will explained, noting that this particular technology is now quite common. “A monitor can read a cow’s tag and make sure she’s put into an appropriate pen for a particular need, such as breeding or vaccination.”

Newmont now meets 50% of its electrical needs from its own solar panel project. That’s equal to what would be consumed by about 135 homes.

Will has spent time working to making sure the Newmont cows are as comfortable as possible and has bedded them on sand. Last year, after touring other dairy farms to see what their owners have done to reduce their costs, he introduced “sand savers” – specialized mattresses designed to use less sand and provide a comfortable base. Nonetheless, separating the manure from the sand in a recycling effort remains very labor-intensive, and Will continues to look for ways to make using this amenity far more passive.

The Newmont barns are also outfitted with swinging cow brushes that the cows themselves activate with a sensor. The brushes stimulate blood circulation, resulting in higher milk production.

Other innovations used at Newmont include using drones to help manage both crops and crop inventory, relying on their own weather station and eliminating the use of bulk tanks. “Within the last few years, we have directly loaded our milk and bypassed the bulk tank,” Will said. “Under what’s called ‘direct load,’ the milk is cooled and a monitor keeps track of the amount of milk loaded.” Agri-Mark picks up the milk to deliver it to Cabot.

An important diversification at the Newmont Farm is the 200 acres of high-quality pumpkins they plant, making it one of the state’s largest producers. They also grow a couple of acres of sweet corn to sell to customers as well as a variety of frozen beef.