The resilience of Pomeroy Dairy Farm 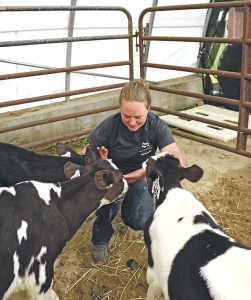 Brother and sister Randy Pomeroy and Rachel Monahan are waiting for the fourth inspection of their brand new onsite processing plant where they plan to make cheese. They’ve already passed the first three inspections at their Pomeroy Dairy Farm in Westfield, MA. They hope to have the processing plant up and running this summer.

The approximately 10-by-15-foot processing plant is set inside a building that was once a restaurant. On the other side of their repurposed restaurant is the boiling room of their sugarhouse, where shining metal evaporator pans are covered until the next sugaring season. They produce 100 gallons of syrup a year.

They plan to rebuild their large circa 1970s milking barn, which burned to the ground on March 4. “There were 70 cows in it. They all got out. We have smart cows,” said Monahan. “It was a beautiful day, and we had let the cows out.” As the gate was open, the cows could go in and out.

“We were all around at 4 p.m. It was just before milking. We lost the whole barn. It was a very dry barn,” which was fodder for the flames, she said. “We are very grateful that we had let the cows outside – very thankful for that. It saved our milking cows.” They did lose five calves, however.

The fire was started by a heat lamp that was being used to warm a calf that had been born in the snow.

One cow, Pansy, who was very used to being inside in her own stall, kept trying to go back inside the burning barn, as animals are known to do in a fire, so a friend put a halter on her and kept her out of the way the whole evening.

Along with the firetrucks that came from five towns, they had help from about 50 friends and family who showed up, ready to truck their cows to a neighbor’s barn about three miles away. That barn had been set up with a milking parlor at one time, but was being used for beef cattle. “Our family moved the beef cattle out and moved our cows in,” Monahan said.

Handfield Dairy Equipment from North Franklin, CT, who supplies and services their milking parlor equipment, cleaned up the milking parlor and got it up and running. The inspectors came out the next day to do routine inspections as required by the state before shipping milk. “They let us ship milk almost immediately so we could keep on going,” Monahan said. “We didn’t miss a single milking, since we were able to milk that night.”

She and her brother travel to the other barn for milking daily. They milk about 40 cows and have a bounty of young stock: 70 calves and heifers.

At their 500-acre farm, they have a calf barn, a hay barn and three heifer barns. The hay barn is fairly new, as their old hay barn burned and was rebuilt in 2007. They grow their own stock hay and corn on about 200 acres.

The siblings’ farm was started by their great-grandfather Ralph Pomeroy. His sons Lewis and Seth Pomeroy kept it going. Their father Harlow Pomeroy chose to work with his father and uncle. When Harlow passed in 2013, her brother Randy returned to the farm. Monahan followed shortly thereafter, in 2014. Randy has a degree in agricultural engineering from SUNY Cobleskill in New York and Monahan studied pre-vet/animal science at North Carolina State and UMass.

When asked if she was going to set up a crowdfunding account, as do many farms or people faced with unexpected catastrophic events, she answered, “Rather than doing a crowdfunding, or GoFundMe page, we hope to get our milk processing plant up and going this summer and have people support us by buying our cheese.” People already buy their syrup, and the milk truck routinely picks up their milk like clockwork. Cheese seems right on target.

To get updates on when the processing plant will open, check out their Facebook page at Pomeroy Dairy.