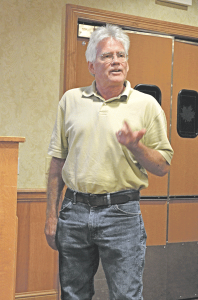 Do you remember crop insurance of yesteryear? In the early days, the concept had to be a hard sell, and then re-sold the following year. Farmers annually had to be talked into buying crop insurance, and found themselves trying to come up with reasons to buy it, playing the odds of natural disasters avoiding their farms during those years. That segued into the cost of doing business to the point where most farmers buy it now as a matter of course, factoring in those costs.

That same scenario is now at the farmer’s doorstep with animal plagues of the avian flu ilk (and more recently, African swine fever). Though neither of them have strayed into Pennsylvania lately, preventive measures that were once in place in the face of threats are now seeking permanence. It is the equivalent of a veterinary border patrol – only this time, it isn’t so much costs we’re dealing with as it is culling infected animals.

“The primary watchwords are going to be 1) detect disease, 2) contain it and 3) control it,” said Veterinary Medical Officer Paul Pitcher of USDA-APHIS. Pitcher spoke at a Penn Ag seminar recently under the auspices of the Pennsylvania Pork Producers Council’s Executive Director Jessica Darr.

“Eradicating infected animals is also on the agenda,” Pitcher said. “This should stabilize animal health in Pennsylvania and in the U.S. It should also solidify the food supply in the economy of the meat producing industry. We want to protect health and safety and the environment at the same time.” Pitcher’s agenda also includes facility in the continuity of business dealing with non-infected animals or products.

Pitcher noted that Foreign Animal Disease Investigation (FADI) must be relied upon to detect ASF. “This is where a veterinarian who has been trained to recognize this disease goes out and investigates suspicious situations, collects samples and submits them to the lab, along with what he’s seeing on the farm,” Pitcher said. This allows them to come up with a diagnosis. ASF Surveillance, rolled out in June by Veterinary Services, is another method of diagnosing. Clinical scoring is carried out by veterinarians and other professionals, even down to barn managers. Pigs are studied, postmortem exams are carried out and tissue samples are collected. These lab findings also contribute to the emergence of a diagnosis. Though considered to be outside of the formal system, it enables a broader, realistic look at what is going on.

Following that, isolation of those pigs is key. Segregation should help minimize contamination. Decontamination has to begin as soon as possible. The virus can survive at room temperature for 11 days in manure. It can also survive for a month in contaminated pens, and for a month in freezing conditions. “Lysol spray, believe it or not, is highly effective against ASF virus,” Pitcher noted.

Moving onto control, Pitcher said, “You’ve got to prevent contact of infected pigs with other pigs. Nationally, there will be some sort of a ‘stop movement’ order issued. That could be at only the regional level if the disease is found only in feral swine.” But it could also be statewide if found either in feral swine or non-commercial, outdoor swine – or nationwide if it’s discovered in commercial swine. That’s effective for up to 72 hours.

“There’s nothing hard and fast about that time frame. It just gives us a window to understand where the disease is so we have time to respond before we move it somewhere else,” Pitcher explained. When they say “Stop Virus Production/Shedding,” that means tracing to find contacts (farms, markets, plants), whether these pigs came from another farm, went to another farm, went to a livestock market – and then those infected sites will be depopulated as they’re found.

“We are an export market for swine,” said Dr. Andrew Hoffman, dean of the veterinary school at the University of Pennsylvania. “Tariffs have hurt us, but we do have people trained to deal with swine fever. The real problem with swine fever if it ever gets here is what to do with the bodies. That’s going to be a real challenge.”

At-risk susceptible pigs must be removed, Pitcher suggested. “These are pigs that are not yet infected. They are potentially exposed, but we want to get them away from any possible exposure by slaughtering them as quickly as we can,” he said. That includes lightweight pigs as well – underweight pigs midway through their grow-out. In controlling animal movements in some areas, doing this under permit only is being studied. This would involve pre-movement testing, a premises ID number, no links to other infected/exposed sites and a bio-security plan.

“We’re using the Security Pork Supply Enhanced Biosecurity Plan as a template,” he said – what he calls the gold standard of such plans. “It’s practical, it’s site-specific and standard operating procedures are available at each site.”

Referring to a photo of one such site, with directional arrows in place to show entry and departure points for personnel and vehicles, Pitcher noted a bit of skepticism. “I’m apprehensive about how close these arrows are together. What would happen if a guy is dragging a dead sow all the way around here, down the side of this road to the dead animal disposal area, and then a feed truck comes in and uses this same road to fill the feed bins? That’s something we might be a little concerned about.” Nor did he see a reason to have access points at both ends of the barns. One access point is enough.