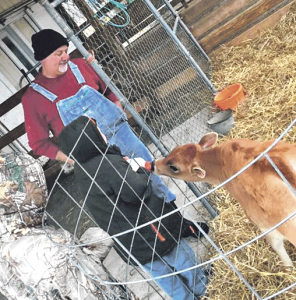 Speed and patience may not seem to go hand in hand. For one man, a lifetime in one career demanded the former, but a more recently discovered calling necessitates a great deal of the latter.

Robert Stovall has spent much of his professional life in a hurry. For a fire engine operator in the City of Monroe’s Fire Department, being quick is all in a day’s work. “Driving a fire truck means I have to get us there fast,” he laughed. “Safe, of course, but fast.”

Stovall’s other occupation, however, requires him to take his time in order to make sure things are done just right. He is “The Cheese Guy” at Brown Creek Creamery. Cheesemaking takes a lot of work, but it also takes time. Stovall conceded, “You can’t rush cheese.”

Located 50 miles outside of Charlotte, NC, Brown Creek operates on an eight-acre spread of land in the Town of Wadesboro.

The origins of Brown Creek begin in 2013 with Jeff Poplin. A dairyman for many years, Poplin decided to go into business for himself. After purchasing land, milking equipment and a registered herd of Jerseys, Poplin found he had more milk than he knew what to do with. That’s when Stovall, who is married to Poplin’s daughter Jennifer, got involved. In 2014, a barn owned by Robert and Jennifer was moved to the farm’s location and the structure was quickly converted into a creamery. Brown Creek Creamery officially opened the same year.

For its first few seasons, Brown Creek featured an on-site farm store where customers could pick up their favorite cheese selections and Brown Creek’s butter and fudge (a favorite seasonal offering) as well as eggs, beef and pork from nearby farms. “We actually had to close the farm store. We needed the space for a packaging room. Our online ordering and deliveries have really taken off,” Stovall said. Orders placed by Monday morning are available for pick-up at the creamery on Saturdays. Brown Creek has also started making deliveries. “We’ve delivered our stuff over 100 miles from the farm,” he noted.

Another significant development (and major revenue generator) for Brown Creek was the introduction of its herd share program. Stovall explained, “Last October, the state legislature passed a law that allowed for people to buy a share of a dairy herd and for the sale of the raw, unprocessed milk. It’s for people who want a fresh, more creamy milk that comes directly from the cow without additional processing. Processing milk kills off harmful bacteria, but it also gets rid of a lot of good bacteria as well. There are more vitamins in raw milk. And when the raw milk is coming from a herd like ours, which has healthy, well cared for cows, and a facility like ours, where everything is always kept very clean, there is extremely little risk.” 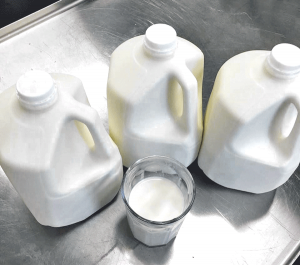 Those interested in a herd share pay an annual buy-in fee of $50. This entitles members to buy shares (one gallon of raw unpasteurized milk costs $6) on a weekly basis. A maximum of four shares can be purchased weekly. Shareholders can pick up their orders at the farm either weekly or bi-weekly. The herd share program operates year round.

Looking toward the future, Stovall estimated that he’ll retire from the fire department in another five to eight years. He said he had always figured that by then the creamery would have grown enough for him to work there full-time. It seems, however, that some of his tendency to get there in a hurry has rubbed off on Brown Creek.

“The creamery is growing much faster than I predicted!” Stovall admitted.