The queen of Kerry cattle 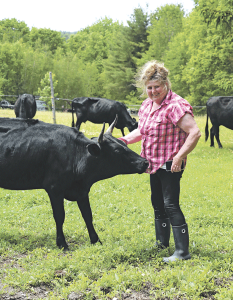 If you drive up a dirt road in the hills of Westminster, MA, you might see a herd of Kerry cattle and think you’ve driven straight into Ireland. Owner and full-time farmer Jody Jess of Buck Hill Homestead Farm has raised Kerrys for nine years, and Dexters for 12. She has a herd of 20 Kerrys and another of seven Dexters.

“Kerry cows are the oldest European dairy cows, and the first grass-fed,” Jess, a champion of the endangered Heritage Breed, said. “I was milking Dexters, and they weren’t giving me the milk I wanted.” As breeders of Dexters and Kerrys keep in touch, a friend of hers who raised Dexters suggested that she might like Kerrys, as she wanted to keep them in milk longer.

The small, fine-boned Kerrys can calve up to 14 or 15 years old and weigh 780 pounds (bulls weigh 1,000). Dual purpose (for both beef and dairy), they have white horns with black tips and are all-black cattle. A bit of white on their udders is accepted by breed standards. A Kerry gives two to three gallons of milk daily if you milk consistently with a calf on, Jess noted.

She is currently secretary of the American Kerry Cattle Association Inc. (AKCA), the driving force behind of a band of Kerry breeders who formed a nonprofit in 2016 to preserve the Irish Kerry cow and promote the breed, and to have a more local contact with which to register their cattle. “It takes a herd of breeders to save a breed,” she said. “You cannot do it alone.”

According to Jess, until 2008, all U.S. breeders registered their Kerrys in Ireland, which is where the breed originated. In 2007, U.S. breeders received a letter from the Kerry Society in Ireland requiring them to register with Canadian Livestock Records Corporation (CLRC), effective 2008. This caused consternation amongst some breeders, creating a roadblock, as some chose not to register their cattle at all if there was no U.S. registry.

Meanwhile, because a few American breeders’ registration records were not kept up, and some herds were lost, registered numbers dwindled. The cause for Kerrys was taken up by Heritage Breed groups like Livestock Conservancy. Currently, Kerrys are listed third on their critically endangered list.

“When we started our group, there was only 45 to 50 cows in the U.S. and Canada, not counting the calves. Our numbers still fluctuate, around 45 to 50. No sooner than we go up, some die off or are lost,” said Jess.

Kerrys are raised only in Britain, Ireland, the U.S. and Canada, with 15 to 16 breeders in North America. Jess knows all the Kerry cattle owners and can list their names and how many cattle they have. “There are less than 250 in Ireland. They are almost globally extinct,” she noted. In Ireland, the Kerrys’ milk is made into the world-famous Murphy’s Ice Cream.

Jess milks her herd by hand, staggering the milking schedule. She is not set up or registered as a dairy. She uses her cow’s milk and feeds it to her Heritage Breed Gloucester Old Spots. She is taking a break from milking due to having carpal tunnel syndrome, although she’s doing all her other infinite farm chores.

She just purchased a homemade portable dairy in a box truck from a friend of hers on the Cape who used it for her own goats and Dexters. When refurbished, it will be a portable dairy with a pipe that allows the milk to flow to a holding tank.

She hays 10 acres, and has been busy fencing in a pasture owned by a neighbor. Another appeal of the Kerrys is that they exist well on mixed grass and no grain. “It’s a goat of a cow,” she joked.

Farming is in her blood. She lives and farms on land where her grandparents had a 167-acre dairy farm until the 1940s.

What she loves best is “how willing the Kerrys are to learn, how caring and loving they are,” she said. “When they don’t know you, they are skittish. When they get to know you, they’ll do anything you want by command. When you pat them, they moan. They don’t love being moved. They like being home, in one place.”

She started the Kerry It Forward program. If she has an extra heifer, she will breed it and find it a new home. People contact AKCA, are vetted and then get the cow and its offspring. They are contracted through AKCA, in case something happens to her. She used to have a Dexter It Forward program too.

She was scheduled to lead her Kerrys with members of her Heritage Hands 4-H group through Brattleboro, VT, during the annual Strolling of the Heifers, but the event was canceled due to COVID-19. She attended in 2017, 2018 and 2019. They had planned to bring Sweetpea, Sheila and Caren; with such sweet dispositions, she calls them “the golden retrievers of cows.”

This is the first year out of four that she hasn’t headed a group of 4-H’ers. Her group of eight was running ragged between her group and a cattle/oxen group in New Hampshire, so she put her group on hold – then COVID-19 happened.

“All my presentations fund testing for Kerrys. We work with UC-Davis Veterinary Genetics Lab. They have done a breed assignment test with the Kerry, using DNA markers which can identify them as pure Kerry,” Jess explained. Tail hairs are sent to a geneticist, Dr. Cecilia Penedo.

“A friend of mine in New Hampshire gets a lot of grants and donation funding for Newfoundland ponies, an endangered Heritage Breed pony, but there’s nothing for cattle,” she said – which makes her love them all the more, and work even harder.