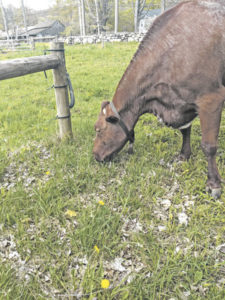 The pick-and-roll is a classic offensive play used in basketball. First comes the pick – player A has the ball and a teammate, player B, will put their body in front of the defender who is guarding playing A. Player B then rolls to the basket. Player A then passes to player B for an easy shot.

According to Samantha Glaze-Corcoran, the pick-and-roll is an apt metaphor to approaching pasture renovation. Glaze-Corcoran is the southern New England coordinator for the New England Grazing Network and a postdoc at UMass Amherst where she conducts on-farm research on soil health. She was a presenter in the Spring 2021 Maine Climate and Ag Network Webinar Series: Pasture Management in a Changing Climate.

In her metaphor, climate change is the opponent. According to Glaze-Corcoran, climate models show that temperatures in the Northeast will increase during summer and winter. They also show that precipitation events are predicted to be more intense and damaging, but there probably will not be an increase in total inches of summer precipitation. The coupling of warmer summers and no increase in precipitation will result in more and longer drought periods.

Glaze-Corcoran equated the first steps of pasture management – getting pH, fertility and weeds under control by clipping or spraying – with setting up the pick-and-roll. This is always the first step of the play. In basketball, this set up usually allows player B to score; in pasture renovation, the set up often yields sufficient improvements.

Sometimes, however, player A can’t pass the ball to player B, and a different play ensues. Likewise, sometimes a farmer’s attention to issues doesn’t yield the intended results, and they must consider an alternate play such as reseeding. “It’s a variation on the play, but you always start by setting up the pick-and-roll. You always start by dealing with your fertility, pH and weeds,” she said.

Continuing with another sports metaphor, Glaze-Corcoran said that an athletic game has two elements – defense and offense. “I think about pasture as our defensive strategy,” she said. According to her, studies show that converting land to pasture can store more carbon than annual tillage systems, and storing, or sequestering, carbon plays a critical role in mitigating climate change and increasing pasture productivity. “Also, when soil carbon is lost there’s a ton of consequences: it affects our microbial communities, fertility and yields. It also impacts water infiltration and water holding capacity, which is going to be super important with more intense and less frequent rainfall events. It also affects our long-term drought resilience,” she said.

She considers how the pasture is managed and renovated as the offensive strategy. This includes practices such as increasing legume populations, improving grazing management and reseeding with improved grass varieties. “All of these things further enhance annual carbon sequestration,” she said.

Specifically, Glaze-Corcoran cited a study that used a model to predict how different pasture compositions would respond to a variety of future climate change conditions in the Great Lakes region. The study concluded that the percentage of legumes in a pasture is the main factor (other than the climate scenario) influencing the net return per cow. Also, the study recommended maintaining a minimum of 30% legumes. Pastures with at least 50% clover and 50% rye grass were predicted to be the most resilient under all of the climate scenarios in the study.

“Legumes are really the most valuable players in pastures,” she said. She suggested frost-seeding as a simple way to increase legume populations, though acknowledged that it’s not always the most effective. She also recommended no-tilling clover into pastures.

In thinking about offensive strategies, Glaze-Corcoran said it’s important to “watch tape” – referring to athletes watching previous performances. “When you watch tape, you’re trying to figure out what the other teams’ plays are but also the inefficiencies in your own plays. You can think of this as where have you left holes in your defense and what are your offensive strengths,” she said.

As farmers “watch tape” and think about how to approach pasture improvements, they should consider soil test results, historical lime and fertility habits, weed pressure and weed types, seeding history, stocking rate and time and weather conditions during grazing.

While Glaze-Corcoran did not discuss more intensive renovation practices such as stand termination or re-seeding, she stressed that once new pasture is established, it’s important not to linger. “In basketball, you’re not allowed to hang out in the paint; you can get a penalty,” she said. (The paint is the rectangular-shaped area underneath the basket.) “The same thing applies to new pasture. We have to give it time to establish, and we have to take a bite and move.” New plants need to be eight to 10 inches before grazing or they can be clipped and allowed to regrow at this height. She also recommended avoiding grazing when new stands are wet.

Glaze-Corcoran concluded with a final sports analogy: “Think about playing for legacy. It’s not just the one game, it’s not just the season. Investing in pasture renovation has a cost, but if we put in those efforts, we can have pastures that can combat and respond to climate change, and keep our farms active and profitable for decades and generations to come.”