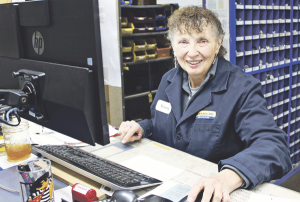 CLINTON, NY — Legendary football coach Lou Holtz framed success as, “Your talent determines what you can do. Your motivation determines how much you are willing to do. Your attitude determines how well you do it.”

Talent, motivation and attitude are tenets that aptly describe Clinton Tractor and Implement Company’s parts professional, Lavonne “Vonny” DeGroat who recently retired from serving the agricultural community for over 30 years.

Whether you were a farmer, highway superintendent, landscaper or homeowner, interacting with Vonny at the counter to get a specific part or solve a problem she has been paramount in keeping the machines running and the labor force moving.

Born and raised in Madison County around the rural hamlets of Peterboro, Madison and Canastota, she expressed that farming was in her blood at an early age. “I came from humble beginnings where we had to be very conservative with our money and make use of every precious resource. We always had small livestock, a garden and worked out in our kind community.”

Her story of rural independence and grit took a turn at age 16 when she was reprimanded by her school teacher for being absent. “My mom asked me what she should write on the excuse. ‘Tell her the truth; I went deer hunting to help feed my family.’”

Apparently, honesty wasn’t the best policy and Vonny didn’t return. “At that time, our neighbors were very good to us as I found work locally at a grocery store in Canastota and would add seasonal work pulling onions out of the mucklands north of our home.”

Later she married dairy farmer, Elmer DeGroat, and moved to the Peterboro area where they milked 50 cows on 190 acres of Honeoye soil and raised two sons, Duane and Mark and her daughter, Lori. It was there she found her interest in heavy metal; her own machines. From an old Farmall H to field equipment and everything in between, she always kept a meticulous “notebook” on her machines and developed an extensive parts inventory system on the fleet. She would take this notebook into the local dealerships to get parts which made it easier for the counter folks to help more efficiently.

As downturns in the agricultural landscape persisted and the dairy was dispersed, Vonny looked for another career path in addition to raising a family and cash cropping. Being mechanically inclined and keeping judicious records, many farmers commented, “You would make a great parts person!”

For over 12 years, she was a staple in the parts department at White’s Farm Supply in Canastota, NY. “This is where I received my on-the-job training. Back then we used a lot of hard copy machinery manuals and bulletins and an early computer system to get the customer the parts they needed. Phone time used to be an all-day affair,” said DeGroat. The rapport she cultivated with customers, employees and the vast, diverse lines of equipment made her an unparalleled local resource.

As farm girls sometimes do, she took herself off the market to work on the farm and pursue other interests until karma came calling when she was helping her daughter Lori, and son-in law, Scott, look for a tractor for their 60-acre farm in Livonia, NY. The search for a New Holland compact diesel just happened to unite her with Clinton Tractor & Implement Company in Clinton, NY. “Shortly after, I got a call from the Calidonna family asking me to consider working in their parts department. Since I’d worked with them since it opened in 1953, when we farmed full-time, it was my natural inclination to work for a family of nice people. I mean you couldn’t work for better people,” said DeGroat.

That decision didn’t come without changes — for Clinton Tractor that is. “With my experience, I talked to them about better organizing the parts department and streamlining many aspects of it. Imagine my surprise when they went in “whole hog” into computer system manuals, ordering and inventory management,” said DeGroat. “It was an adjustment for everyone at first but it gave the busy customer a timely response to their needs and it integrated well with the other departments.”

The “Parts Prodigy” has seen a lot of changes in her last 16 years of tireless work. “It’s baffling to see the size of the machines and the amount of horsepower used today. You can do so much more, and faster,” said DeGroat. “We rely on having a good-sized inventory for equipment commonly used. Our parts suppliers and shipping carriers are fantastic and punctual in the age of ‘just in time’ stocking.”

Regardless of the process, the grandmother of seven is on her feet all day helping customers, starting at 5 a.m., when she is polishing the counter and putting parts deliveries away. Owner, John Calidonna said, “I can set my watch to her detailed habits. She is so reliable and so steady with a knowledge base and integrity that is hard to match.” 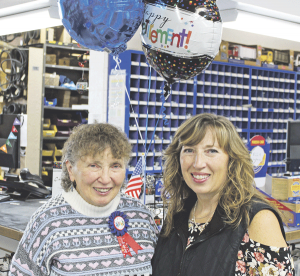 Patrons were confused as the staff of over 50 at Clinton Tractor “shut down” for an hour to honor Vonny for her 16 years of impeccable service and to wish her well. Accolades were frequent.

Mark Nower, a 28-year employee with Clinton Tractor and Implement Company said, “Vonny has a work ethic that is second to none.” Farmer, Dean Edwards, praised her for being one of the nicest people to work with.

“Vonny is straight up honest, who invariably can help customers, answer phone calls, weld, pound out bearings and delight our grandkids all in a day. Go try to buy that somewhere,” exclaimed John Calidonna. “She will always be part of our 4th generation family. She improves and inspires people’s lives.”

What’s the next chapter for the retiree? “I’ve got a lot of catching up to do around the farm and I’m looking forward to refurbishing some old cane chairs. I’d like to spend more time with my family and grandchildren in addition to vacationing in North Carolina.”

“I’m thankful and blessed to have worked with great people and customers in the farming community and being considered as family. I live by a simple ideal: Your life is made up of two dates and a dash. Make the most of your dash.”