The mission at Manning Hill Farm 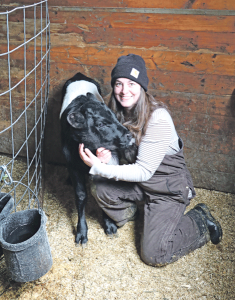 Manning Hill Farm sits at the end of Old Manning Hill Road, where a farm once flourished in the 1800s. When partners Sarah Costa and Sam Canonica purchased the Winchester, NH, property in 2006, they named it Manning Hill Farm (MHF) and brought it back to life.

“It was kind of a dream of mine and my partner’s, that we had growing up, to have a farm,” said Costa. Together, they made that dream come true. They are full-time farmers, producing, bottling and marketing their own milk. “It’s been 10 years already. It’s crazy – I don’t know where the time has gone,” she said. The cows produce 500 to 600 gallons of milk a week.

They built their dairy by buying nine Dutch Belted cows in 2010. Their herd is now 80 in size, with 30 milkers. The rest are young steers and calves of various ages. They raise their bull calves to be grass-fed steers, or sell them as matched pairs to 4-H teamsters to train as oxen. They also sell heifer calves. Besides milk, they sell grass-fed beef, pork from Heritage Gloucester Old Spot sows and a Tamworth boar, eggs, whole roasting chickens raised from heritage breed chickens and firewood.

Why start with Dutch Belteds? “We did a lot of research. We figured since we were bottling our own milk, not sending it out, that we needed a niche cow to fit our niche market,” Costa said. “Our whole dairy business is based on grass-based production. We rotationally graze our cows.” The cows are fed a little bit of grain when they come into the old barn to be milked, to get their minerals.

Besides being excellent foragers, the Dutch Belted breed is extremely efficient in turning all consumed nutrients into milk. Due to their small size (cows are 900 pounds) and friendly disposition, they were a good fit for fledgling farmers. They are known for their longevity and easy birthing capabilities. At MHF, cows produce calves and milk even as teenagers, rather than aging out at four or five.

Usually having black fronts and backs with white middles, or red with white middles, they are also known for their beauty. They caught P.T. Barnum’s eye, who raised a herd in the 1840s and showed them in his circus. The Livestock Conservancy Organization lists Dutch Belted in second place on their critical list.

This New Hampshire couple are committed to protecting and promoting the breed by raising more purebred Dutch Belteds. At first, their cows were artificially inseminated with registered Dutch Belted semen. After a decade, they have two of their own purebred, registered, A2/A2 breeding bulls. Dutch Belteds’ milk has very small fat globules which adds to its taste, makes it easy to digest and requires no homogenization.

There are 126 acres of pasture and hay fields at MHF. In 2018, they bought another old dairy, acquiring another 180 acres. They rent a further 200 acres along the Connecticut Rivershed.

Canonica harvests at least 1,000 round bales a year. They feed second-cutting square bales to their calves and sell them to local farmers, stored in the loft of the original gambrel barn. They fertilize hay fields with manure and organic wood ash, and manage them using best management practices worked out with the USDA-NRCS.

Having their own bottling plant makes MHF unique. “When we started the business, we decided that’s how we would market our milk – that we bottle our own milk and have our own processing plant,” Costa said. “We bottle and process milk on Monday and Thursday. Sam delivers the milk within a 30-mile radius to wholesale stores on Tuesday and Friday.” Their bottling plant is inside a converted stone garage beside their busy year-round farm store.

“It’s very hard. It’s not an easy business to be in. We’ve come a long way from where we started. We worked hard to get where we are,” Costa admitted. “It’s hard to have milking cows and have your own bottling plant and bottling your own milk.”

Because they do their own bottling, they maintain a steady supply of calves year-round, with three to five calves born every other month to maintain milk production. “We balance our milk production. We’ve gotten better at it over the years. In 2010, when we started with nine cows, there were a lot of times we didn’t have enough milk [to meet market demand]. Now we have plenty of milk; now the problem is efficiency,” said Costa.

They cannot physically process any more milk than they do now with the equipment they have. They are trying to figure out if they want to upgrade and have a more efficient milk plant. It is a Catch-22: if they do upgrade to become more efficient, they’ll produce more milk, but they like staying small.

“Our whole philosophy is staying small. We don’t want to get big,” Costa said. “Our milk is not mixed up with anyone else’s. Our milk tastes very unique. Our customers love the taste of our milk.

“The problem with being this small is the equipment is so expensive. They don’t make anything that small scale. We mainly need a faster bottle washer. We sell all our milk in glass returnable bottles.” That requires washing and sanitizing bottles before use. Their current bottle washer washes 70 bottles at a time, 20 minutes to a cycle – equaling 3.25 to four hours washing time each bottling day.

Their wish list includes upgrading to a six-valve filler with a 20-foot conveyor, rather than their current single valve bottle filler, and purchasing a larger vat pasteurizer.

This dedication to her products and farm earned Costa the Keene Sentinel Trendsetters Award in January, given to young entrepreneurs for achievements in the workplace for their community. She is one of only 12 in the Monadnock region to earn the award. Now, it’s back to milking.